Ahead of this weekend’s Farmers Insurance Open at Torrey Pines, we’re set to provide a few PGA Tour predictions for the event.

We begin with the outright market for the tournament in an effort to determine the winner of the tournament. As it stands, Jon Rahm (+450) is the favorite to win and is followed on the odds board by Collin Morikawa and Xander Schauffele (both +1200).

Then, Tony Finau (+1400), Justin Thomas and Will Zalatoris (both +1600) round out the shortest prices on the odds board

Given Rahm’s form at the moment, I’m selecting only two choices this week in the outright market. With that said, let’s get straight to the picks.

Before we get to the picks, it’s important to note the statistics I used to construct a model. By doing this, it helps sort the field and allows me to identify the best bets. Here’s the model:

Rahm is undoubtedly the class of this field, but Schauffele is a unique player whose game fits Torrey Pines well.

Over his past 24 competitive rounds, Schauffele ranks first overall in that modeling projection. He’s also second in both the 36-round and 50-round projections and arrives at Torrey Pines fresh off a T-3 at the American Express.

In terms of the first projection, Schauffele is steady across the board. What he lacks in driving distance (64th), he makes up for in SG: OTT (30th) and SG: APP (3rd). Plus, he’s fifth in bogey avoidance, ninth in Par 4 Efficiency and first in Par 5 Efficiency.

Another element worth noting about Xander is his expertise on poa greens. Over his last 24 rounds on that putting surface, the San Diego State product leads the field in SG: Putting while sitting fifth in birdies or better gained and first in bogey avoidance.

This tournament was among Zalatoris’ many second-place finishes last year, so we’ll back him to secure the victory this year.

The big unknown with Zalatoris, who has posted consecutive top-10 finishes at the Farmers, is the flat stick.

He’s by no means on Xander’s level in terms of a solid repertoire on poa greens — 56th in strokes-gained: putting on that surface — but does sit 25th in birdies or better gained and 32nd in bogey avoidance over his past 24 rounds on the surface.

However, his ball striking is tremendous, a large reason he’s third overall in my 24-round projection. Over that span, Willy Z is fourth in SG: OTT and fifth in SG: APP.

Further, Zalatoris is a solid 13th in Par 4 Efficiency while ranking 20th in Par 5 Efficiency.

One final trend worth noting with Zalatoris is that he’s at his best when playing on difficult courses. Over his past 24 rounds on tracks that fit that profile, he’s first in the field in SG: Total and birdies or better gained.

Based on those factors, I’ll back Zalatoris at anything better than 15/1 this week. 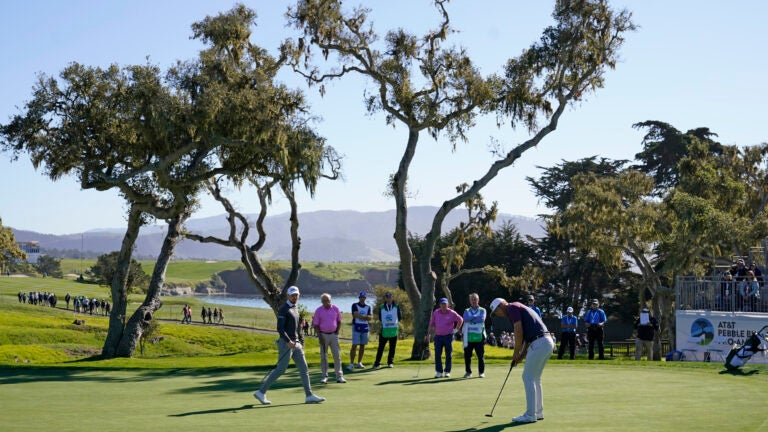