As Monday Night Football between the Dallas Cowboys and New York Giants nears, we continue to share our top bets for the matchup.

Here, we’ll cover our favorite prop bets for the evening. In utilizing some statistics and key team trends, I’ve landed on two player props that appear to be slightly underrated and give bettors a great chance of cashing a ticket.

Totals and odds are reflective at time of writing and subject to movement.

I was a touch surprised this number came in so low, but I’m thrilled to get behind Zeke away from home.

If there’s one element of the Giants defense that could use some improvement, it’s their run defense. Currently, head coach Brian Daboll’s rush defense sits 22nd in total rushing defense, per footballoutsiders.com.

Additionally, New York has surrendered ample yardage to both Derrick Henry and Christian McCaffrey in the first two weeks of the season. Against Henry, New York allowed 82 yards and 3.9 yards per carry. Last week against McCaffrey, the Giants conceded 102 rushing yards and 6.8 yards per carry to the Stanford product.

On the flip-side, Elliott has yet to clear this benchmark in two games this season, but has come awfully close. Against the Bucs, he notched 52 yards on 5.2 yards/attempt before posting 53 yards on 3.53 yards/attempt last week against the Bengals.

If Elliott can find a happy middle-ground between those two yards/attempt metrics — let’s call it 4.35 yards/attempt — he’ll need only 14 attempts to surpass this total. And last season against the Giants, he reached that attempt threshold in both games.

Add an inexperienced starting QB, Cooper Rush, and I’ll back the Cowboys running back up to -120 on this prop.

Would you look at that: one Zeke back and one Zeke fade on Monday Night Football!

There’s certainly a bit of correlation between these two props, but I don’t expect Elliott will produce much in the passing game tonight either way. In two games this season, the Ohio State product has amassed a grand total of four targets for two catches and — I swear this isn’t a misprint — minus-7 yards.

Plus, it’s not as if the Cowboys aren’t getting their running-backs involved in the passing game. Rather, they’re choosing to do it through Tony Pollard, who has much better stats in the passing game. Through two games, Pollard has recorded nine targets for six receptions and 69 receiving yards.

With those stats in mind, one might assume that the Cowboys have pre-determined roles for their two key backs. Plus, we know Elliott will garner more carries. Pollard has only 15 combined rush attempts against the Bucs and Bengals while Elliott has carried the ball 25 combined times.

Given how heavily juiced the under is on Elliott’s reception total — under 2.5 receptions is -200 at BetMGM — a lot would have to go right for him to clear this benchmark.

Back the under in receiving yards so long as it stays at -120 or better. 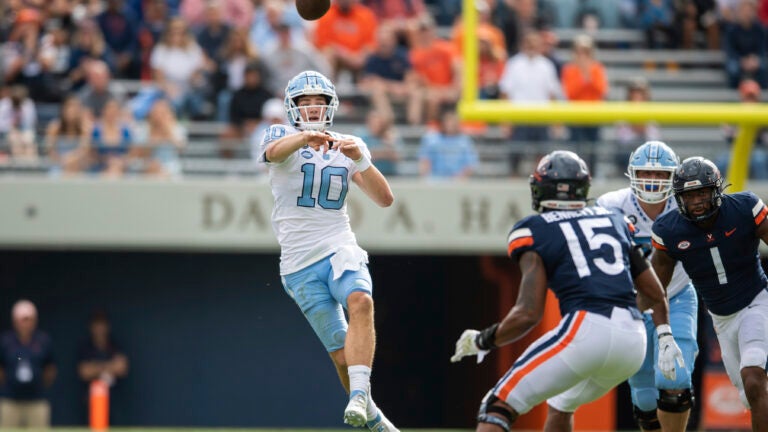