The NFL MVP race has begun to take shape after four weeks of action. Josh Allen, the preseason favorite, still has the best odds of winning the award, but he has been joined by a trio of fellow quarterbacks who may give him a run for his money.

Let’s start with the favorite. Josh Allen (+275) has looked sharp through the air in the first month of the NFL season. He enters this upcoming week with the second most passing yards in the NFL, and he’s also third in QBR. However, what makes Allen so valuable is his rushing ability. Allen is the lead running back for the Bills as well.

He leads them in rushing yards and is only four carries shy of leading the team in that department. It also helps his case that the Bills are off to a 3-1 start, and their latest victory was a signature win over the next MVP candidate.

Lamar Jackson (+550) is where the discussion starts if we’re talking about mobile quarterbacks. He has rushed for 316 yards while averaging 8.5 yards per carry. Those totals are higher than some of the game’s best running backs. Although, what has made Jackson an MVP candidate this season is his improvement in the pocket. He enters this week tied for the league lead in touchdown passes and sixth in QBR. Getting a win over Allen last week may have vaulted him up the odds board, but he and the Ravens offense were shut down in the second half.

Sticking with the theme of mobile quarterbacks, Jalen Hurts (+550) has made a name for himself. While the weather dampened his performance last week against Jacksonville, he’s had his talent on full display this season. He has taken the Eagles to the next level with his improved accuracy and rushing ability. His progression has turned the Eagles into a trendy Super Bowl pick, and if the Eagles get there, you can bet his name will be in the MVP conversation.

Lastly, we’ll look at Patrick Mahomes (+450). Mahomes has looked phenomenal this season as he just shredded a stout Tampa Bay defense last Sunday night. However, that was just the latest performance in what has been an MVP-level campaign.

He is currently tied with Jackson for the most touchdown passes and leads the NFL in QBR. Mahomes has also turned the ball over only three times and taken just five sacks, which are vast improvements from prior seasons. His statement victory over Tom Brady on Sunday put him right behind Allen on the odds board. Their matchup later this season could have a significant impact on the race.

At this point in the season, each of these men has value, and the best way to determine your pick may be to project team success. All four of them could get their teams to the Super Bowl, but Allen, Mahomes and Jackson will likely have to go through one another to get there. So does that open the door for Hurts to win the award? That remains to be seen. 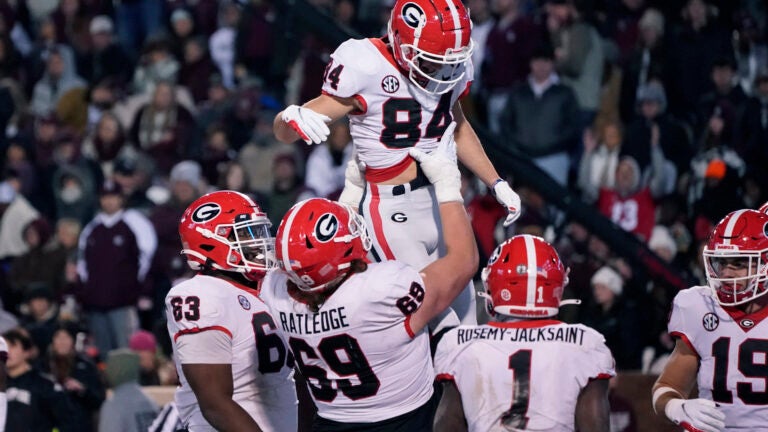 LSU vs. Georgia prediction: Is there still value to find on the SEC title-game total?