The Hyundai Ioniq is a truly unique vehicle. It marks the first time an automaker has released a single model available as a hybrid, plug-in hybrid, and pure electric, making it quite the chameleon.

That means there’s a version of the Ioniq to suit a variety of needs and lifestyles. Here are the 10 best and worst things about the 2018 Hyundai Ioniq plug-in hybrid:

Most hybrid and plug-in hybrid cars have a continuously variable automatic transmission. It helps with fuel efficiency, but this type of transmission can also be loud. Hyundai ditched the CVT and instead gave the Ioniq hybrids a six-speed dual clutch transmission that delivers power smoothly without the annoying whine of a CVT.

Hybrids are not known for being sporty cars, but the Ioniq gives sporty a go with its drive modes. Choose Eco for the best possible fuel efficiency and more muted performance or Sport for a little more energy. It’s never going to drive like a sports car, but it has a bit more pep in Sport mode for those times when fuel economy isn’t the top priority.

Rather than looking different simply for the sake of being different, the Ioniq looks like a typical sedan. Styling is sleek and aerodynamic without needing to scream to the world that it’s a hybrid. This makes the Ioniq a welcome addition to the hybrid landscape.

The Ioniq keeps the outside clean and simple, and the story is the same inside. There’s no weirdly stylized design to get used to in the Ioniq. Anyone who has spent time in a Hyundai will find it all very familiar and comfortable. The Ioniq doesn’t make a fuss about being a hybrid, and it’s a refreshing change of pace. 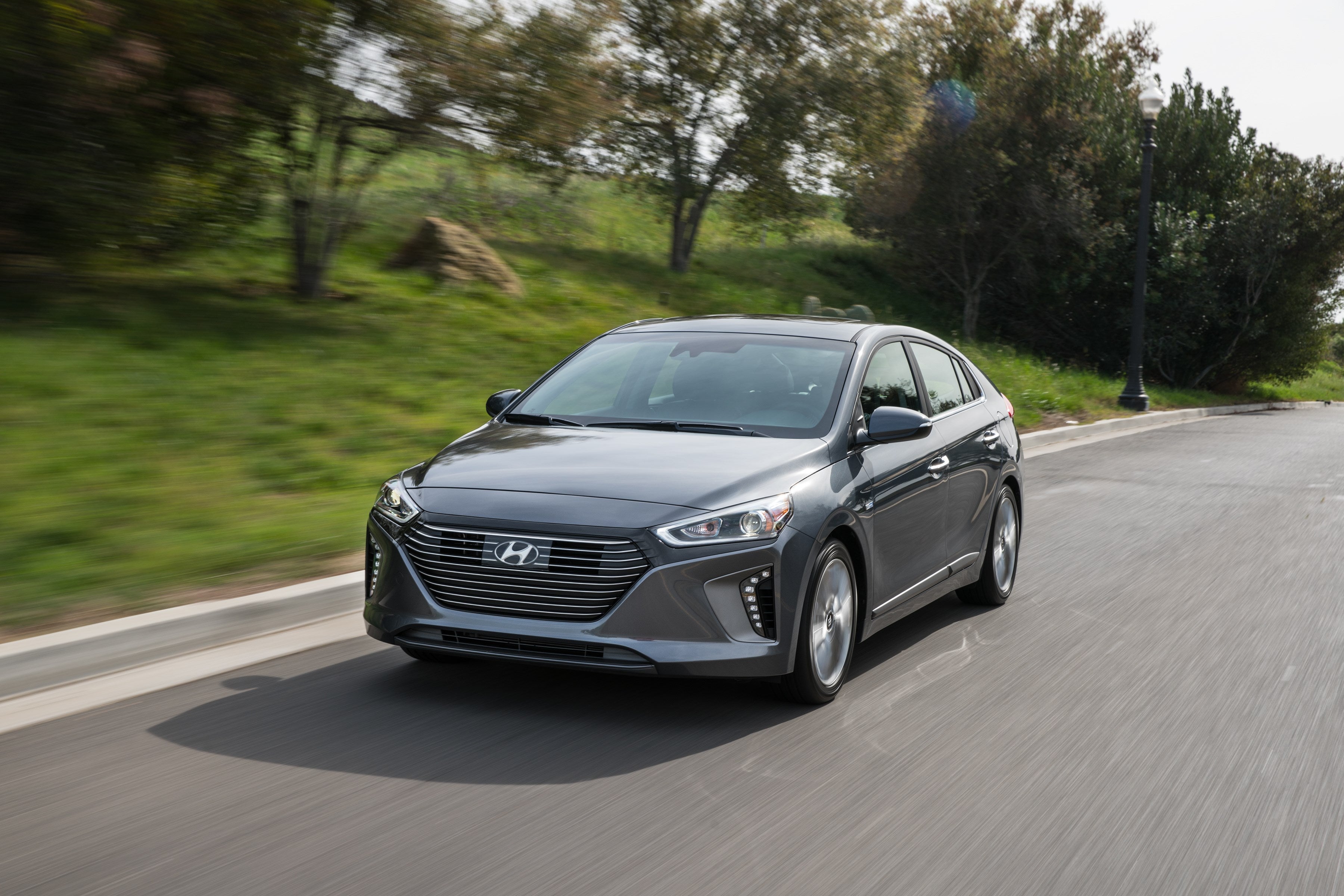 Hybrids aren’t known for being quick off the line, and the Ioniq is no exception. Press the gas and it takes a moment for the car to respond. Power delivery isn’t too much of an issue in city driving, but taking the car on the highway is a different story. Merging into heavy traffic is challenging, and getting extra power at highway speeds for passing is even more daunting.

The Ioniq is roomy up front, but the front seats are stiff and heavily bolstered, making them a tight fit for anyone on the large side. In back, the sloping roofline makes it too short for anyone tall, and even average-height adults will feel like the roof is a little too close.

There’s always a focus on making a hybrid lightweight to further improve fuel economy. This often means lots of plastics for the interior, and that’s what you get on the Ioniq. It feels like an economy car, especially in base trim levels. Optional leather seats help to give the interior an upgrade, but it feels spartan no matter the trim level.

Your only choice across the Ioniq lineup is front-wheel drive. In New England, where the roads spend a good chunk of the year covered in snow and ice, this is often a deal-breaker. Driving in the snow is a challenge even in an all-wheel drive crossover with extra clearance. A low sedan without all-wheel drive won’t be the best choice for those who need to head out the door no matter the weather.

The Ioniq might be available in three styles, but they aren’t all sitting in dealer lots. The hybrid is widely available, but the electric is currently only available only in California and the plug-in is limited to only 10 states, including Massachusetts. Check with your local dealer to see when it’s due to arrive near you.