It’s a great time to be in the market for a luxury SUV. Three legacy brands (Jaguar, Porsche, and Land Rover) are all making luxury compact SUVs that are more stylish and performance-oriented than the mainstream BMW X1 and Audi A5 offerings.

We put the top three options in a head-to-head-to-head battle to see which luxury SUV reigns supreme. Here are the contenders:

Jaguar F-Pace: With styling cues borrowed from the new Jaguar XE sedan and wagon, the F-Pace could be the brand’s best blend of capability and performance to-date.

Land Rover Range Rover Velar: The Velar has the capability of its Range Rover namesake, but is more road-oriented. It’s arguably one of the best looking cars on the road today—inside and out.

Porsche Macan: The Macan is like a sports car in SUV clothing. It might be a bit tighter in the cabin than the other options, but it’s an SUV for the performance driver.

The F-Pace and Macan have similar interior formatting, with the positioning controls in a driver-centric layout. This makes for a more cramped cockpit positioning compared to the Velar—which has a standout interior design, dominated by the Touch Pro Duo “infotainment” system. It is comprised of two touch screens: the upper screen for entertainment and maps and the lower screen controls many of the various vehicle systems including climate controls, heated/cooled/massaging seat controls, vehicle performance settings, and other sub-systems. What makes this system stand out is the integrated dials, greatly enhancing the intuitive user experience. 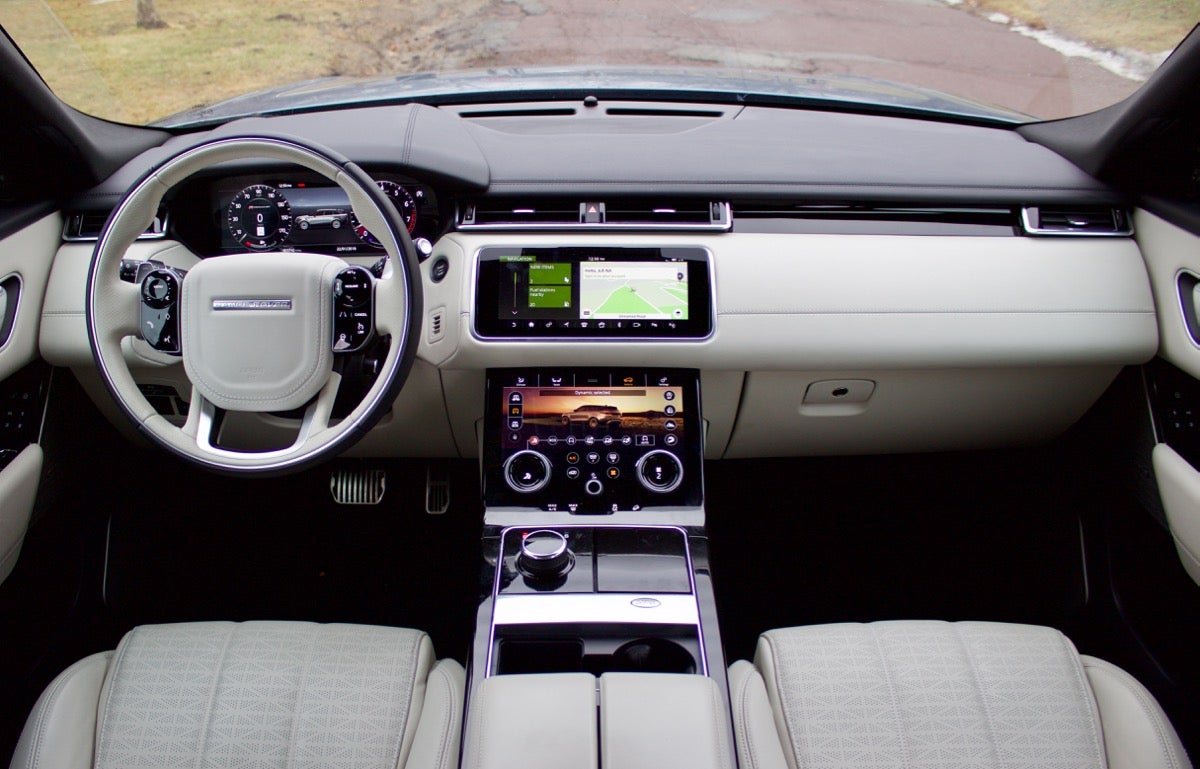 The beautifully designed interior of the Range Rover Velar.

The Macan is available with Apple CarPlay, but not Android Auto, so if you are a power user of either device or operating system, be aware of the lack of options. Neither the F-Pace nor the Velar feature Apple CarPlay or Android Auto.

With these vehicles, thrilling performance comes standard. All three feature potent engines, responsive steering, and great cornering abilities. With Jaguar/Land Rover as the parent company, both the Velar and F-Pace have similar engines. The base engine for both is a 247 horsepower turbocharged inline-4, while an available four-cylinder turbo diesel engine has 180 horsepower but 317 pound-feet of torque. 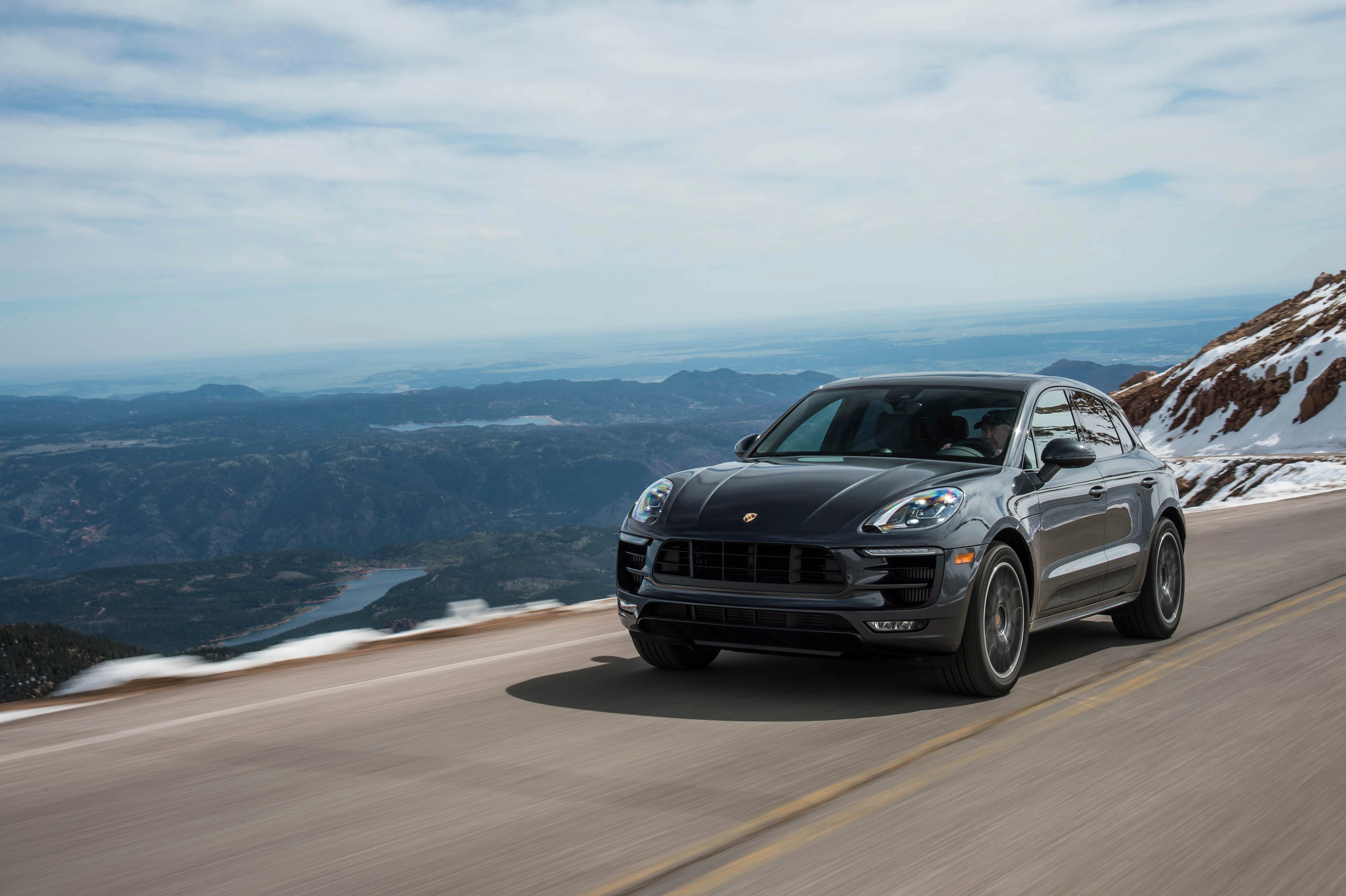 The Macan is the sports car of compact luxury SUVs.

Both the Velar and F-Pace are available with a supercharged V6 engine. For the F-Pace, it can be either 340 horsepower or 380 in the F-Pace S. In the Velar, the engine is 380 horsepower. The Velar and Macan can each be outfitted with an air suspension system, though the Velar is capable of driving farther off the beaten path.

The Macan features a range of engines, starting with the turbocharged 2.0-liter inline-4 and goes all the way up to the twin-turbo V6. That version, the Macan Turbo, has 400 horsepower and a 0-60 time of just 4.4 seconds. For entry-level models, the F-Pace and Velar are faster than the Macan, but if you want the fastest, best-handling ride, the Macan Turbo is sure to thrill.

Different options and packages can make the price increase quickly. Most vehicles will cost around $60,000 to $70,000, but the Velar and especially the Macan can be spec’d out in a way that costs $90,000 or more. Overall, the E-Pace is 14 inches shorter than Jaguar’s F-Pace SUV. The difference is most apparent in the rear seats, but two six-footers can still be comfortable there—just. The sunroof helps prevent claustrophobia.

For purists, a Jaguar SUV may seem like a funny concept, but as brands like Porsche have shown, you can bring road-going performance to an SUV without watering down heritage. In fact, selling SUVs may be Jaguar’s best path to success moving forward.

The Macan is the purest performer but lacks some of the space and versatility of the F-Pace. Taste is subjective, of course, but the Land Rover Velar has the most interior space and arguably the best styling. It boasts a solid blend of comfort and drivability while delivering a fantastic level of luxury.

What the experts say about the 2020 Aston Martin DBS Superleggera