Read on to learn the latest about the 2019 Toyota Corolla Hatchback.

1. It has high-style and high-tech:

Toyota has often prioritized function over form in its interiors—much to the benefit of its owners. The new Corolla Hatch actually blends the two with sharp interior design, featuring two-tone styling and soft-touch materials.

The centerpiece of that new dash design is a “floating” touchscreen, running the latest version of Toyota’s Entune Audio infotainment system. It comes with Apple CarPlay (finally!) and features Amazon Alexa integration, allowing you to take much of its functionality on the road.

Perhaps what’s most significant is what has not changed — Toyota has kept some of the traditional controls that drivers instinctively reach for in nearly any car. Volume knobs, tuning dials, home buttons for touchscreen functions, and even conventional climate controls all remain. This means that for all the new technology, the Corolla Hatchback will be as intuitive as it always has been. 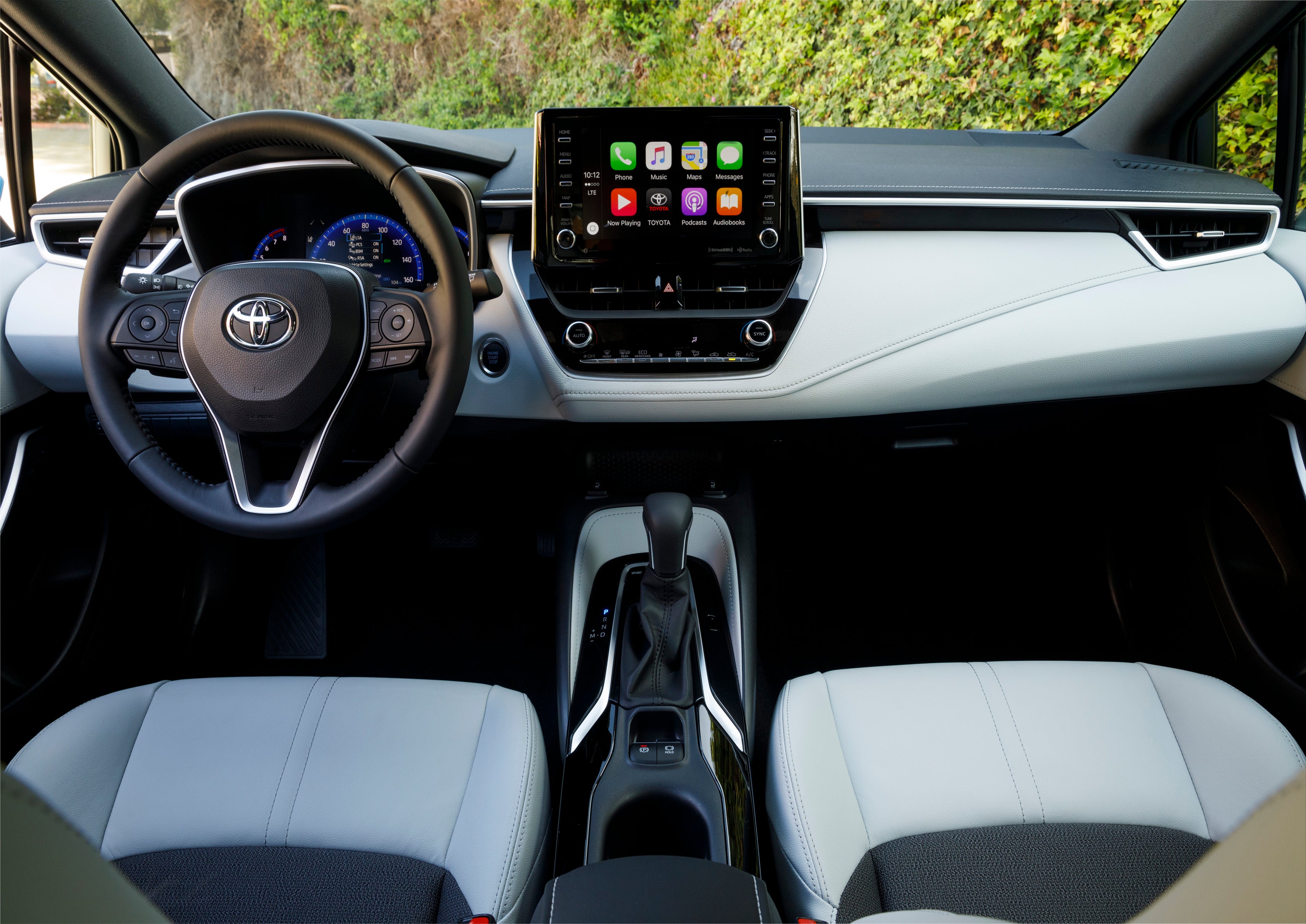 The Corolla Hatchback features an upscale, high-tech cabin, with ease-of-use in mind.

The Corolla Hatchback is powered by a new 2.0-liter, four-cylinder engine, routing power to the front wheels through either a continuously variable transmission (CVT) or a six-speed manual transmission. Horsepower and torque figures for the engine have not yet been announced.

The manual transmission features rev-matching, which can “blip” the throttle for smoother downshifts—a trick that will be appreciated by seasoned performance drivers. According to Toyota, the so-called “intelligent” manual also has a function that can prevent stalling, which will be a huge help for novice drivers.

It complements a sport-tuned suspension and a platform that has 60 percent more torsional rigidity than the iM model. The result is a more direct-feeling driver’s car that also happens to seat five comfortably.

Toyota has been leading the way among high-volume automakers that also offer advanced driver-assistance features as standard equipment. This is true of the Camry, Corolla, RAV4, and more — all of which feature Toyota Safety Sense P (TSS-P).

The Corolla hatchback builds upon this with the second generation of this suite of safety tech, dubbed TSS 2.0. This suite continues to provide forward collision warning and avoidance, adaptive cruise control, lane departure warning, and automatic high beams, but now adds “Lane Tracing Assist” and “Road Sign Assist.” The former reads the lines in the road to make small steering adjustments to keep the car centered in the lane. This is a hands-on system; you can’t take your hands off the road like some of the more advanced semi-autonomous systems. The latter, as the name suggests, can read street signs along the road and presents them in the digital display in the center of the instrument panel. 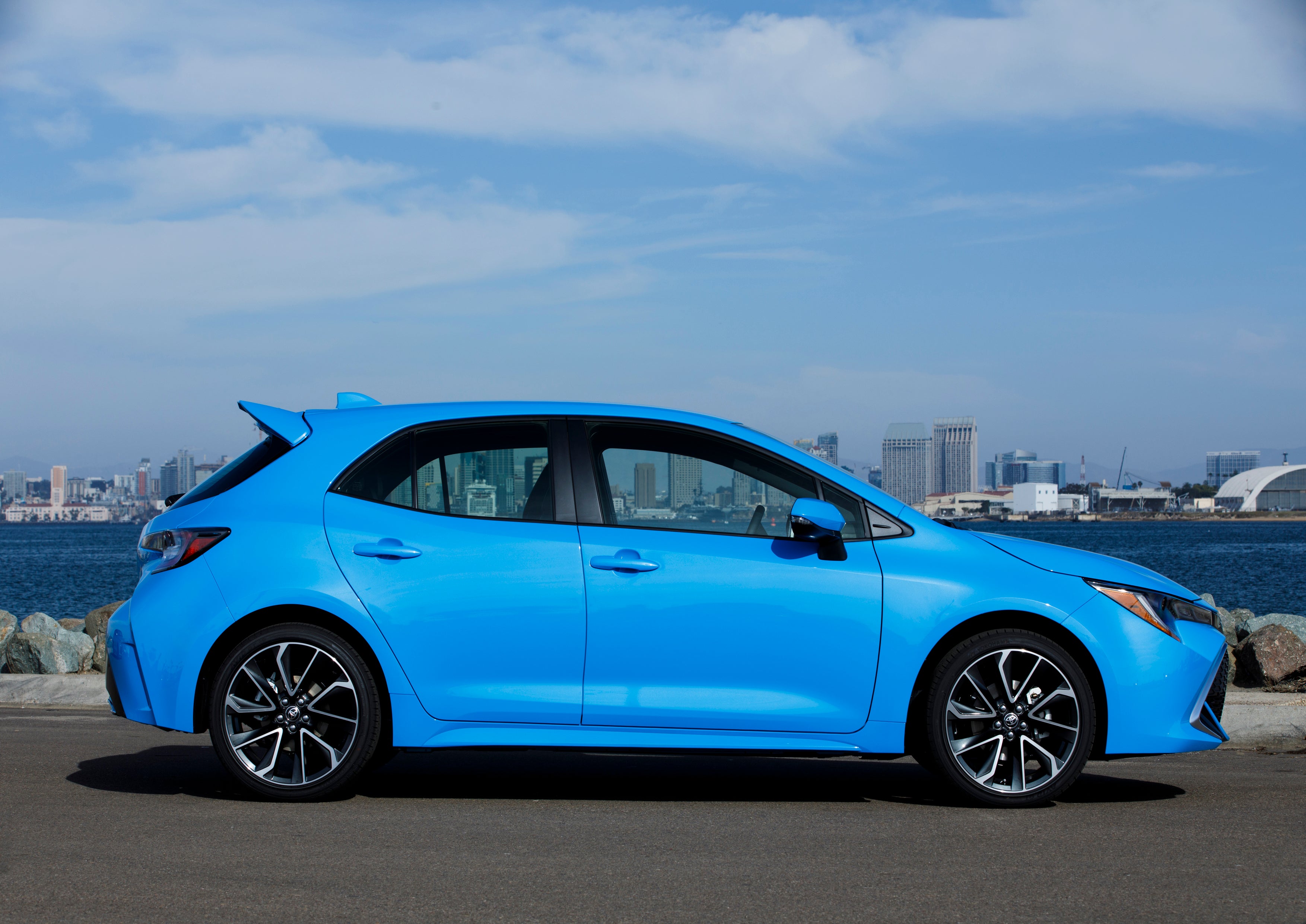 The Corolla Hatchback comes standard with a wealth of high-tech driver assistance features.

4. You can buy it this summer:

Toyota currently has a hatchback version of the Corolla, but you may not have heard of it. It’s called the Corolla iM and is a re-badged Scion. The iM may be a smart option for many buyers, but under the Toyota brand, it has slid down the priorities list. Still, if you are in the market for a compact hatchback, the current Toyota Corolla iM, which has a starting price of $18,850, is worth a look.