The Toyota Prius may be synonymous with hybrids, but shopping for a gas-electric car is no longer a choice between that and a handful of also-rans. Today, more than a half-dozen hybrids return 45 mpg or more while offering impressive space, cutting-edge tech and more conventional shapes that don’t flaunt their eco credentials quite so blatantly.

If you factor in a growing group of plug-in hybrids — hybrids with battery packs replenished from a charger — it’s clear we’re in the midst of a new hybrid era. If you’re thinking about a switch to a gas-electric car, Edmunds breaks down what you need to know about some of the latest hybrid hardware. We’ve listed the cars in descending order of their combined EPA fuel economy rating.

The Ioniq tops the hybrid field with impressive mpg, but you’ll need the spartan Blue trim level to see those numbers. We’d sacrifice 3 mpg and opt for the SEL trim instead, which offers more creature comforts and tech, such as heated seats and blind-spot monitoring. Like the hybrid benchmark Prius, the Ioniq is a hatchback with ample interior and cargo space. The Hyundai, however, can’t yet match the Toyota’s smoother ride or refinement. But the Ioniq, which is also available as a plug-in hybrid or pure EV, does offer impressive efficiency at an attractive price. Starting manufacturer’s suggested retail price (MSRP), including destination fee: $23,085.

The Prius still rates as one of the best hybrids. The current-generation car offers exceptional fuel economy and a newfound responsiveness and handling absent in earlier generations. Abundant cargo and passenger space continue to make the Prius the hybrid car to beat. The Prius Two Eco trim level returns 56 mpg combined but lacks items such as driver safety aids. We prefer the standard Prius (52 mpg), which splits the difference between the Eco and a smaller Prius variant, the Prius c (46 mpg). Starting MSRP for the Prius, including destination: $24,395.

The Prius may be the best-known hybrid, but Honda’s Insight actually beat Toyota to American shores by a few months to become the first hybrid sold in the U.S. The Insight comes and goes: 2019 marks the third iteration that’s been sold here. It now returns as a small sedan, sized like a Civic. Inside, however, the Insight feels more like an Accord, with comfortable seats, quiet ride and advanced infotainment. Starting MSRP, including destination: $23,725.

Even more impressive than the Camry Hybrid LE’s 52 mpg combined is its standard equipment. You’ll find heated seats, LED headlights, and advanced safety features such as adaptive cruise control and lane departure warning. These make for a roomy, well-equipped sedan with Prius-like fuel economy, which is no easy feat for a car that’s larger, faster and cushier than the Prius. Even a fully loaded Camry Hybrid returns 46 mpg, which is still 12 mpg better than the most efficient non-hybrid Camry. Starting MSRP, including destination: $28,870.

One of the newest hybrids on the market, the Niro impresses with its generous cargo space. The Niro isn’t quite the SUV that Kia advertises it to be — it lacks proper ground clearance and all-wheel drive — but it’s a nice hatchback with room for active, gear-laden lifestyles. The FE model returns the best fuel economy, but we prefer the EX trim, which adds upgraded upholstery and driver safety aids, with just a 1 mpg penalty. Starting MSRP, including destination: $24,280.

Not to be outdone by the Camry Hybrid, the Accord Hybrid also offers generous standard features, along with new changes for 2018, such as improved trunk space and a folding rear seat. Previous models suffered from bulky battery pack placement and fixed rear seatbacks. It includes advanced driver aids such as adaptive cruise and blind-spot monitoring, and the cavernous interior is trimmed in high-quality materials. The Accord Hybrid’s fuel economy is a little lower than the Camry’s, but it’s still impressive. Starting MSRP, including destination: $25,995.

A dark horse among hybrids, the Malibu Hybrid is the best of the Malibu lineup thanks to its pickup and responsive handling. Noise-reducing side windows and tech features such as Apple CarPlay and in-car Wi-Fi make it a quality car for commuting and family driving. The cabin feels a bit plain compared to its rivals, and the Malibu is not as fully equipped. But its options include leather upholstery and wireless smartphone charging, allowing you to tailor a Malibu to your taste. Starting MSRP, including destination: $28,795.

EDMUNDS SAYS: Hybrids evolve quickly, and today’s crop of compact and midsize cars offers an incomparable balance of features, comfort and fuel efficiency. With smaller hybrids returning 50 mpg or more, and larger sedans not far behind, today’s hybrid shoppers have no shortage of excellent choices. 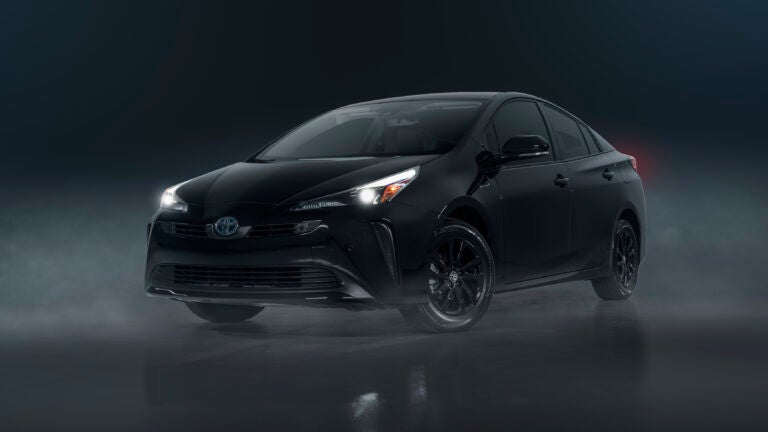