Even though Land Rovers are common sights in these parts, one model is still a rarity: The mighty Land Rover Defender, a direct descendant of the vintage Land Rovers that have become 4×4 icons.

After an absence in the U.S. of over two decades, the Defender is finally back for 2020, and it’s all-new.

A lot has changed in the past 22 years — even in the past decade — in the new car market. Land Rover had to recreate this vehicle to align with modern buyers’ demand for comfort, safety, and technology while retaining the off-road chops that have made the Defender the de facto vehicle for relief organizations, the military, and well-heeled adventurers all over the world.

Here are six key details to know about the 2020 Land Rover Defender.

This one might seem obvious, but the Defender doesn’t change very often. Model runs for the Series I, Series II, and Series III that predated the Defender lasted decades. For its re-entry into the North American market, Land Rover has created an all-new platform that’s separate from the rest of the lineup. It’s designed to be compliant with more stringent modern safety regulations, which were what led to the Defender’s departure from the U.S. in 1997. The new Defender can wade into nearly 3 feet of water.

The expectation for capability.

Throughout the world, the Defender has the same utilitarian ubiquity of a Jeep Wrangler. It is used in remote places, thousands of miles from replacement parts or any vehicle that can tow it out of trouble. The new vehicle will be held to the same expectations, and it is slated to deliver: The Defender features a two-speed transfer case (aka “low-range”), a locking center differential, and an active locking rear differential. It also features Land Rover’s Terrain Response 2 system, which can sense the terrain and respond accordingly.

The Defender is also capable of wading into 35.4 inches of water, an incredible feat. It features a clever WadeSensing system, which raises the vehicle’s ride height, locks the driveline, softens throttle response, and even recirculates the cabin air for climate control.

The engine options are potent.

For U.S. customers, two engine options are available: a turbocharged four-cylinder and a six-cylinder mild-hybrid engine. The P300 is a 2.0-liter turbo I4 making 296 horsepower, and it has been used in many other Land Rover vehicles to make adequate power and acceleration.

The P400 uses a twin-turbocharged inline six-cylinder, fitted with a single turbocharger as well as a 48-volt electric supercharger. It also has an electric motor to help in low-speed situations. The total system output is 395 horsepower and 406 pound-feet of torque. Power is sent through an eight-speed automatic transmission.

When properly equipped, the Defender can tow up to 8,201 pounds, which is as good as some V8-powered SUVs. It has more tech than ever before.

Land Rover is also using the Defender as an opportunity to debut a new infotainment system, called PIVI Pro, consisting of a 10-inch touchscreen. Land Rover says it is more responsive than the current system and includes Apple CarPlay and Android Auto. It also provides over-the-air updates, allowing the software to stay current without customers having to come in for service.

The Defender also features the ClearSight Ground View system. It uses the cameras from the vehicle’s 360-degree parking camera system to “see through” the vehicle and down to the trail below. This system then projects the image of the trail, along with a wireframe of the vehicle, on the central touchscreen.

It makes serious use of space.

The Defender will launch first with the 110 and later with the 90. The four-door 110 will be optional with 5+2 seating layout, including a front bench seat. The front center console folds up, and when it does, the rearview mirror’s digital rearview monitor activates (since that center passenger would obstruct the mirror). Land Rover does make use of that non-functional panel, with a number of “Adventure Packs” that add various racks, tie-downs, and carrier cases. You can even get a version with a ladder built into the side. The Defender can be outfitted with all manner of adventure gear, including a ladder. 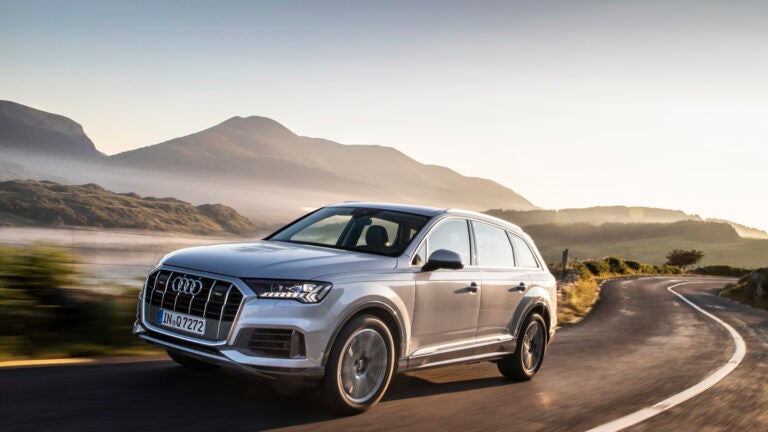