New electric vehicles, several new small SUVs, a redesigned compact car, a plug-in version of Toyota’s top-selling vehicle and a futuristic electric station wagon concept car from Volkswagen are among the new models on display this week at the Los Angeles Auto Show.

Toyota is displaying a rechargeable hybrid version of the RAV4 — the top-selling vehicle in the U.S. that’s not a pickup truck — while Ford is rolling out an all-new electric SUV that carries the Mustang performance car brand name. There also is a redesigned compact Sentra from Nissan.

The show opens to the public on Friday. Here are some of the highlights:

Nissan is hoping a sleek redesign of the Sentra compact sedan will pull in more buyers in a struggling segment of the U.S. market.

The 2020 Sentra, which goes on sale in late January, loses the old version’s upright econobox look. It’s built on new underpinnings that lower it two inches and make it two inches wider than the outgoing model. It’s got a coupe look that mimics the design of newer Nissan models like the Altima and Maxima. The new version gets a new 149 horsepower, 2-liter four-cylinder engine that’s 20% more powerful than the current model, yet Nissan says it will offer better gas mileage. It also gets a new rear suspension and steering system to improve handling. Even though it’s an entry-level car, it comes standard with six safety systems including automatic emergency braking and pedestrian detection. Price and gas mileage were not announced. 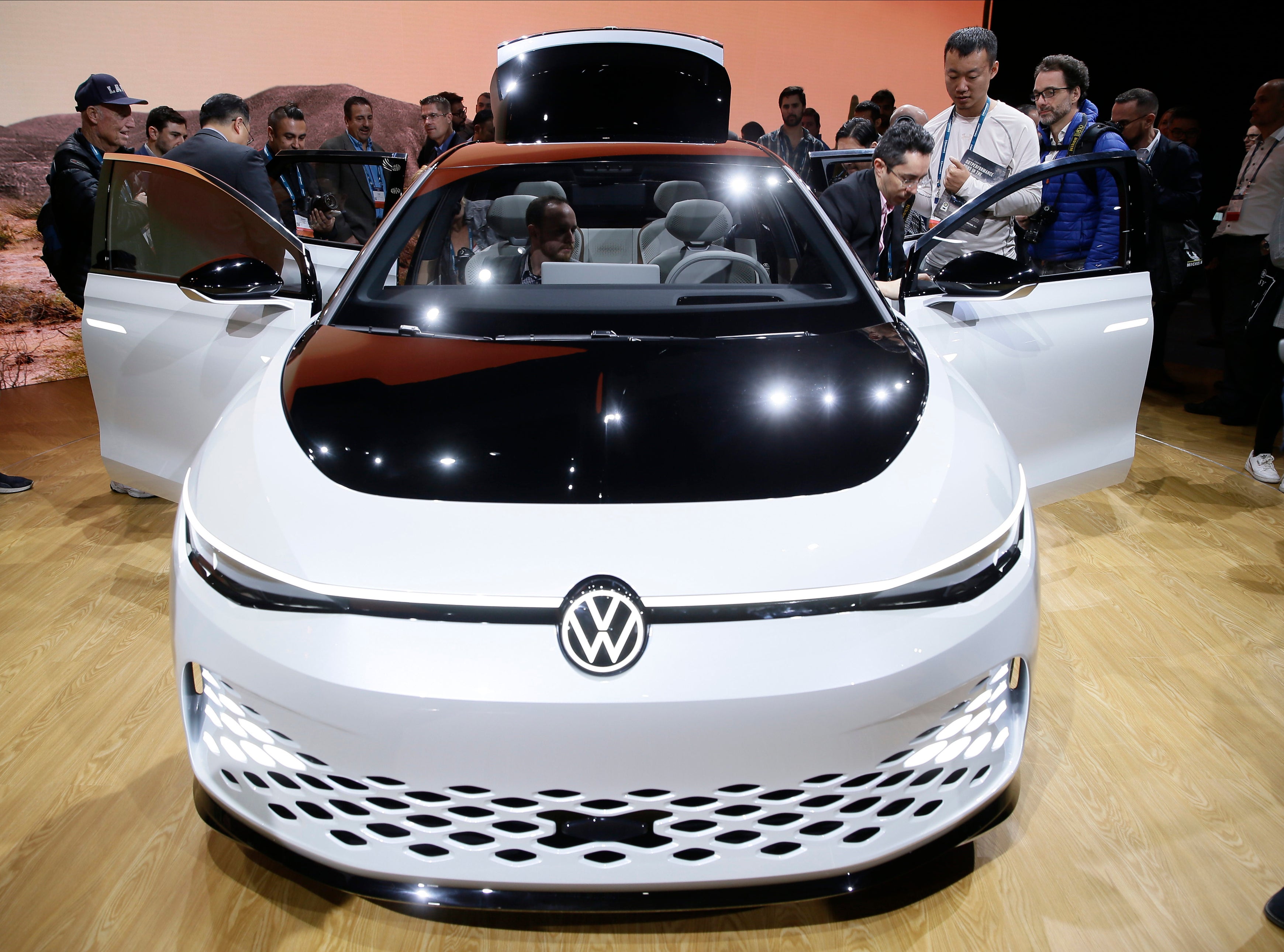 Volkswagen is giving us a glimpse into the car of the future with a low-slung electric station wagon called the ID. Space Vizzion Concept.

The German automaker, which has focused on electric vehicles after its diesel emissions-cheating scandal, says the wagon will be able to go 300 miles on a single battery charge. It has a rear-mounted 275-horsepower motor, but a second motor could be installed for all-wheel-drive, giving the car 355 horsepower. The all-wheel-drive version will be able to go from zero to 60 mph (97 kph) in five seconds, Volkswagen says. To limit wind drag, the car has touch surfaces on the doors in place of conventional door handles. An augmented reality 15.6-inch touch screen that appears to float in the air has all entertainment, climate control and online information. VW says the car is a preview of a production vehicle for North America and Europe, but it didn’t say when the wagon will go on sale. 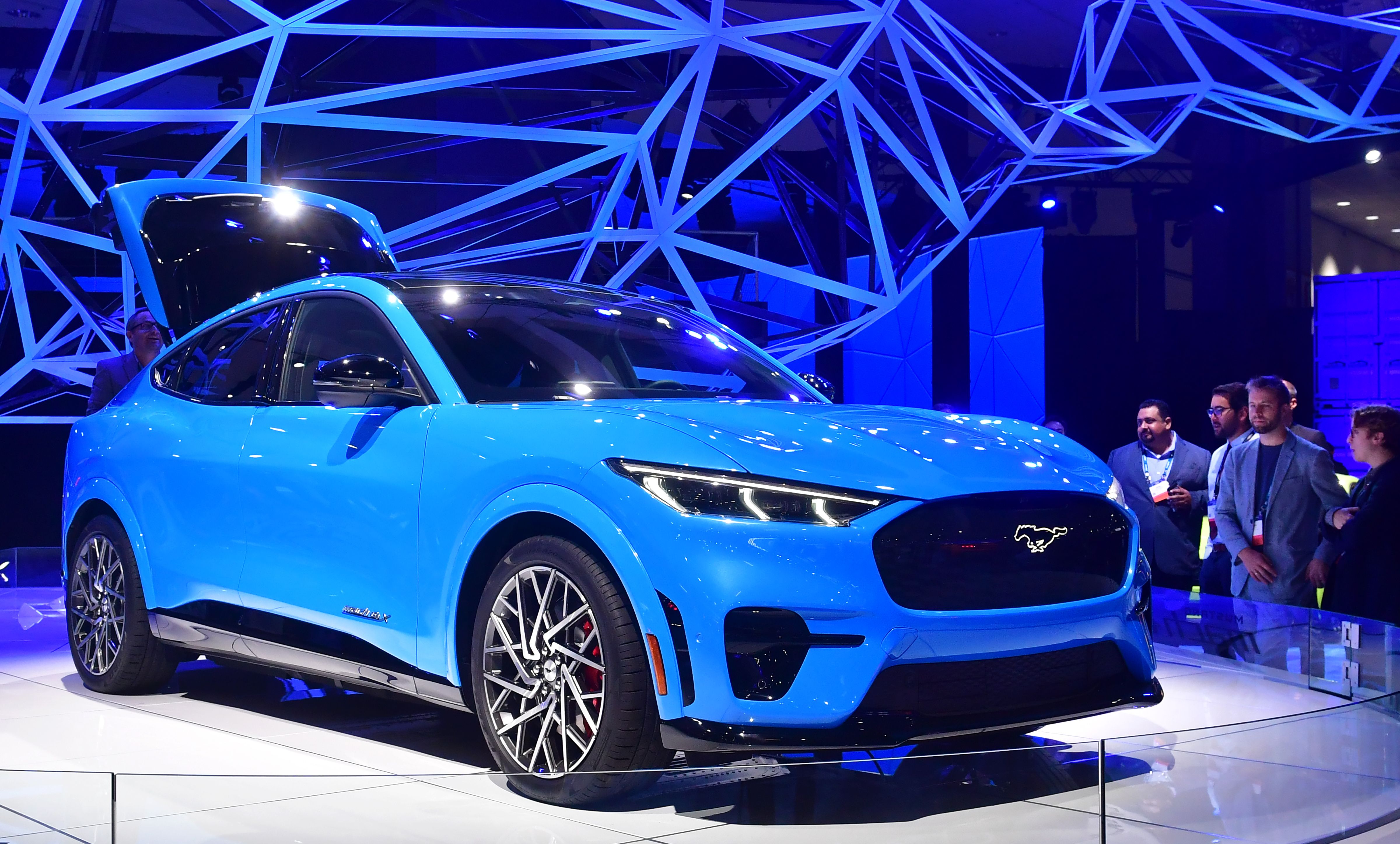 A new Mustang Mach E GT on display at the 2019 Los Angeles Auto Show in Los Angeles, California on November 20, 2019.

Ford will display its first all-electric SUV, marking the start of an avalanche of battery-powered vehicles coming from mainstream and luxury automakers during the next two years that industry analysts say will boost electric vehicle sales.

Analysts expect the number of electric vehicles for sale in the U.S. to grow from 16 currently to as many as 80 by 2022. They say the increased selection and longer range of the new vehicles will make them more popular.

The car gets some Mustang styling cues including triple taillights, a fastback rear and a long hood. A performance GT version will be able to go from zero to 60 mph (97 kph) in about 3.5 seconds.

The Mach E was unveiled Sunday night ahead of the Los Angeles show.

Toyota is rolling out a plug-in electric version of the popular RAV4 small SUV that’s more efficient and faster than the current versions.

The 2021 RAV4 Prime will be able to go 39 miles (63 kilometers) on battery power alone before the gas-electric hybrid propulsion system kicks in. It will get the equivalent of 90 miles per gallon (38 kilometers per liter) of gasoline, according to Toyota. Yet the 302-horsepower system will take the car from zero to 60 mph (97 kph) in 5.8 seconds — a full two seconds faster than the current RAV4 Hybrid. The SUV, which is the top-selling vehicle in the U.S. that isn’t a pickup truck, has a tuned-up version of the RAV4 Hybrid’s 176 hp 2.5-liter four-cylinder gas engine powering the front wheels. A separate rear-mounted electric motor powers the rear wheels when needed. Toyota says the battery is mounted under the floor, giving the SUV a lower center of gravity and improving its handling. The RAV4 Prime goes on sale in the summer. The price wasn’t announced.

Korean automaker Kia is adding another compact SUV to its model lineup with the Seltos, which is a little bigger than the compact Soul.

It comes standard with a 146-horsepower 2-liter four-cylinder engine with a continuously variable transmission. Also available is an optional 175-horsepower 1.6-liter turbocharged four with a seven-speed automatic gearbox.

Kia says it has a well-appointed interior with modern exterior styling with a long wheelbase and hood.

Kia’s “Drive Wise” safety technology suite is an option with forward collision avoidance that includes pedestrian detection and automatic braking to help prevent a crash or mitigate it.

The LX version with optional all-wheel-drive will start below $22,000, but other pricing details and fuel economy weren’t released.

The Seltos goes on sale in the first quarter of next year.

General Motors’ Chevrolet brand adds a compact SUV to its growing lineup with the tough-looking Trailblazer.

The new SUV, with a starting price below $20,000 including shipping, sits between the subcompact Trax and the compact Equinox.

It comes with either a 1.2-liter or 1.3-liter turbocharged engines with a maximum of 155 hp. It’s mated to a continuously variable transmission or an optional nine-speed automatic. It’s front-wheel-drive, but buyers can choose an all-wheel-drive option.

Exterior styling follows cues from the larger Chevrolet Blazer. In some trim levels it has a two-tone roof. It comes standard with a list of safety features including forward collision alert, automatic emergency braking and front pedestrian braking.

The 2021 Trailblazer arrives in showrooms in the spring. Fuel economy wasn’t announced. 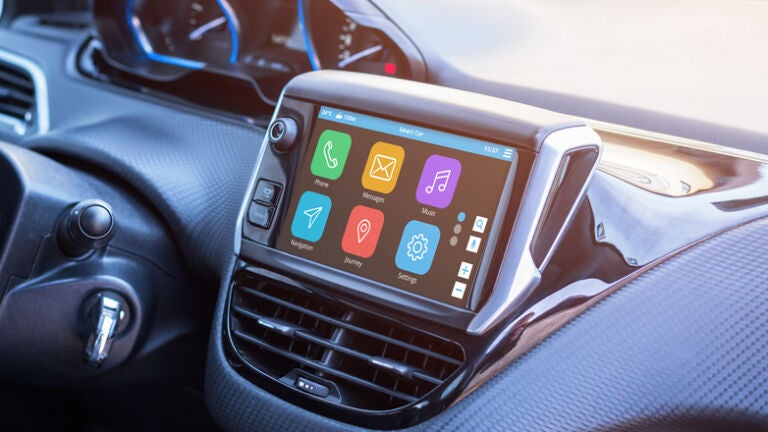