Massachusetts now has a hands-free driving law in effect.

The ban on handheld phone use means drivers could be fined at least $100 if they are caught breaking the law. It also closes a so-called “loophole” in the state’s 2010 distracted driving law that made it virtually “impossible” for police to enforce the ban on texting while driving, according to Rep. Bill Strauss.

Most new vehicles — and many newer used ones — already have the tools for hands-free phone use, but you have to know where to look. And if your car is on the older side, there are plenty of affordable aftermarket accessories that will ensure you are in compliance.

Here are a handful of options and accessories to help you keep your hands off your phone while driving.

Bluetooth has been available in vehicles for about a decade, and it’s among the most commonly available hands-free features on this list. After your phone is paired via Bluetooth, you can make and receive calls, and most set-ups will even allow you to stream music from your phone.

To set it up, look for a phone icon, either on the steering wheel or among the dash buttons. Most systems will prompt an ID that appears both on the phone and the car’s radio or instrument panel display. Once you pair your device, it will automatically reconnect every time you get into your vehicle.

For iPhone users, some later model cars even have Siri EyesFree, which allows you to control Siri by holding down the voice control or phone button for an extra second. With Siri EyesFree, you can compose, send, and receive text messages, all using voice control.

There are a number of devices on the market that can turn any car into a Bluetooth-enabled vehicle. Some emit a radio frequency that you can tune into from your car’s stereo.

Others are as simple as a small Bluetooth speakerphone that mounts onto a visor. The visor-mounted device has a “phone” button that allows you to answer incoming calls and initiate outgoing ones. 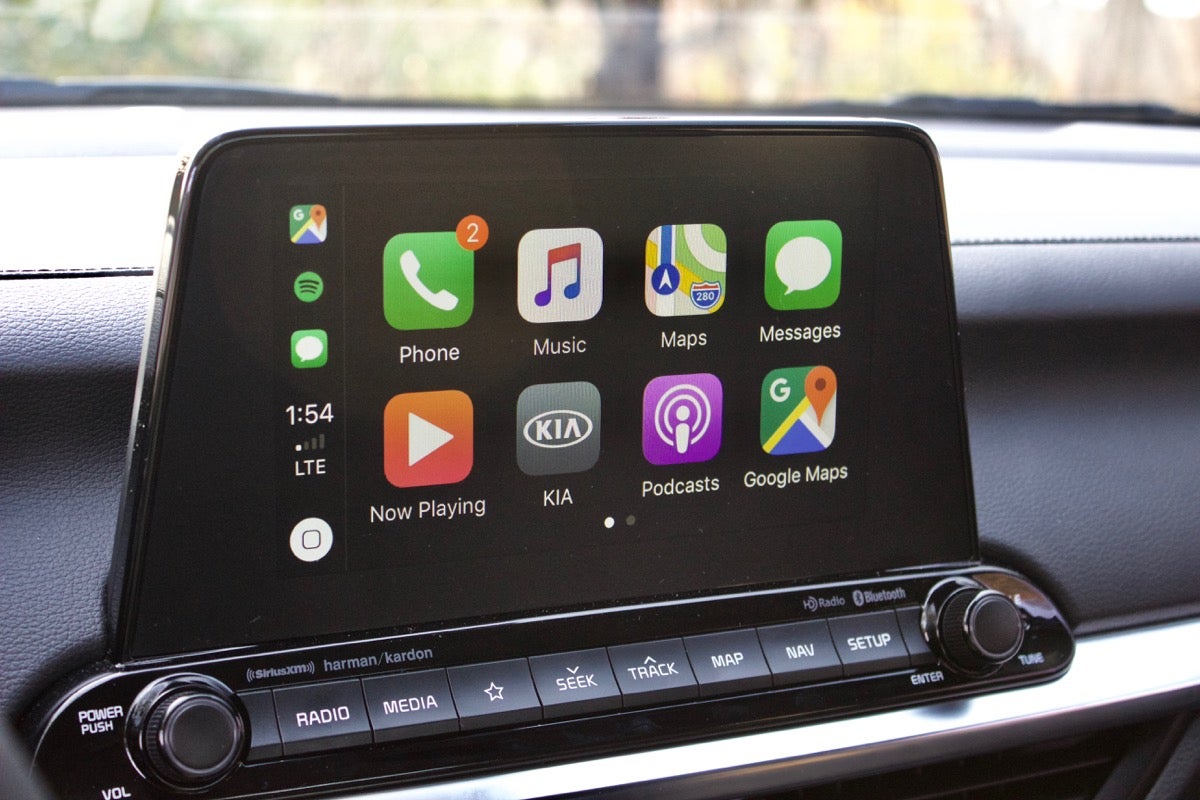 Apple CarPlay, as found in the Kia Forte.

Apple CarPlay and Android Auto provide most of your phone’s functionality from your vehicle’s infotainment system. These systems project selected apps onto a touchscreen interface that has the look and feel of your phone, text messages, Google Maps, Apple Maps, Waze, podcasts and radio apps, and more.

The tech giants have worked for years to seamlessly integrate their platforms with a range of automakers. Apple and Android provide comprehensive lists of vehicles that support this technology.

Connecting with Android Auto requires plugging the phone into a USB port. Nearly all cars with CarPlay require to connect via a USB port, though some select late-model Audi, BMW, Mini, and Mercedes-Benz models provide wireless CarPlay.

If your car doesn’t have Bluetooth, Apple CarPlay, or Android Auto, the simplest and most affordable route is to get a phone cradle.

These cradles often plug right into a climate control vent or mount to the dashboard or windshield via a suction cup or another adhesive. Per the new law, the phone must be in hands-free driving mode. Luckily, modern mobile devices have a “hands-free” mode that allows you to control, say, an iPhone by using Siri.

Single-din head units simply have a microphone built in, while others provide a small wired mic that you can feed under your dash and place closer to the driver. Many of these units also have USB ports, so you can charge your phone.

Double-din head units have more features but take up more real estate on your dash. They have their own touchscreens to answer calls, and some even come equipped with Apple CarPlay and/or Android Auto.