DETROIT (AP) — The competition for full-size pickup truck customers in the U.S. is as rough-and-tumble as ever, with Ram and Chevrolet rolling out brawny-looking new models that are larger, lighter and more efficient than their predecessors.

For the first time in recent memory, two Detroit automakers are introducing new big trucks at the Motor City’s auto show at the same time, in a hot sales market that U.S.-based automakers have dominated for years. Last year, Ford, Fiat-Chrysler and General Motors combined sold more than 2.2 million full-size trucks, controlling 93 percent of the segment.

Big pickup truck sales are important to automakers, which make huge profits on them. Sales rose nearly 6 percent last year to almost 2.4 million, even though total U.S. auto sales dropped 2 percent. One in every seven vehicles sold last year was a big pickup, up from one in every nine in 2009 in the midst of the Great Recession. Ford’s F-Series pickup is the country’s top-selling vehicle, followed by the GM’s Chevy Silverado and Fiat-Chrysler’s Ram.

GM unveiled the Silverado Saturday night, while Fiat Chrysler is to roll out the new Ram Monday at the North American International Auto Show. Both are meaner-looking and bigger, but much lighter. Each has sophisticated engine or transmission improvements that give them better gas mileage as they go after the F-Series.

Ford is countering that with its first diesel engine on the F-150, a 3-liter V6 that’s expected to get 30 miles per gallon (12.8 kilometers per liter) on the highway.

Style and performance are about the only ways the companies can differentiate themselves because quality has improved greatly, said Karl Brauer, executive publisher of Autotrader and Kelley Blue Book. “They’re giving the trucks more aggressive styling, which helps make them stand out,” he said. “Also they’re giving them verifiable increases in performance.”

The trend toward tougher-looking trucks started with the 1994 Ram, which changed from a conventional flat front with friendly round headlamps to rounded fenders with an outsized grille, and a hood and fenders that resembled a semi, Brauer said. The trend has continued as headlamps have switched to smaller, rectangular LEDs that allowed for even bigger grilles.

GM market research shows that a meaner look appeals to truck buyers, who mainly are males. Eighty-three percent of big pickups in the U.S. are registered to males, according to data collected by IHS Markit. But women are gaining ground, making up 17 percent of registered owners last year from 14.7 percent in 2007.

Sandor Piszar, Chevrolet’s truck marketing manager, says buyers want the tough look, but the trucks also must have towing and off-road capability. “They’re mean-looking trucks, but they’re trucks that can get the job done,” he said.

The 2019 Ram, due in showrooms before April 1, keeps the current beefy look, but it’s 4 inches (10 centimeters) longer and slightly wider. The grille is larger, with a forward-leaning, aggressive slant. The hood was raised to evoke a big rig — and improve aerodynamics. Even the chrome Ram logo at the rear got a more chiseled, burly look.

The new Ram also loses 225 pounds (102 kilograms) to compete with lightened rivals including the aluminum-clad F-150. The Ram frame is almost entirely lightweight, high-strength steel, and its tailgate and other bits are aluminum.

But perhaps the most significant change a mild hybrid system, standard on most gasoline versions. The system replaces the alternator with a motor and a 48-volt battery pack, which can shut down the truck at stop lights to save fuel and boost acceleration. The system recaptures braking energy to charge the battery. FCA isn’t releasing mileage but says it will be significantly better. The current Ram, redesigned in 2013, gets up to 25 mpg (10.6 kilometers per liter) highway with a gas engine or 27 (11.5 kilometers per liter) with a diesel.

The Silverado, which goes on sale this fall, is up to 450 pounds (204 kilograms) lighter than the current model. Parts that swing, including doors, the hood and the tailgate, are lighter aluminum, but stationery parts such as the bed, are steel. The Silverado’s frame also made high-strength steel.

The truck gets two new V8 engines, 5.3-liters and 6.2-liters, that can shut off any number of cylinders to save gas but power them up when needed. There’s also a new 3-liter six-cylinder diesel and a 10-speed automatic transmission available.

The new Silverado is just under 2 inches (5 centimeters) longer than the old one for more cargo and interior space. It gets bigger fenders, a larger grille and sinister-looking but smaller rectangular headlamps.

GM wouldn’t release weight, fuel economy or price, but said the 450-pound loss is on a crew cab model with a V8. The current crew cab with a 6.2-liter V8 gets 20 mpg on the highway (8.5 kilograms per liter).

Mark Reuss, GM’s product development chief, says mileage may not be top-of-mind for a buyer who isn’t using the truck for work. But it’s important to companies with big fleets, despite low gas prices. Reduced weight also makes the truck more agile, appealing to all buyers, he said. 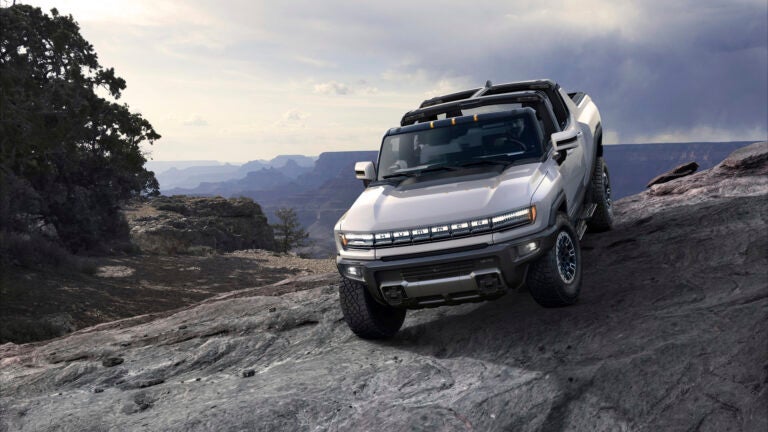