DETROIT (AP) — A fire that damaged a Michigan auto parts supply factory is causing production problems at Ford, Fiat Chrysler, BMW and General Motors, but it’s too soon to tell yet whether dealers will run short of vehicles.

So far Ford has been hit hardest by parts shortages. The company has had to temporarily lay off 7,600 workers as it cuts production of the F-Series pickup truck, the top-selling vehicle in America.

But General Motors has been forced to stop producing full-size vans at a factory in Missouri, and production of Fiat Chrysler’s Pacifica minivan has been curtailed in Windsor, Ontario. BMW says it expects some production interruptions at its SUV plant near Spartanburg, South Carolina.

It’s all because of a May 2 fire that severely damaged the main plant at the Meridian Magnesium Products of America factory in Eaton Rapids, Michigan, near Lansing that makes structural parts, about one-third of which goes to Ford. Multiple automakers have turned to Meridian to produce parts made of the lightweight metal as they try to shed pounds to meet government fuel efficiency standards.

Ford says it’s working with suppliers to limit the impact on production. “We’re confident that any impacts will be short-term,” Joe Hinrichs, executive vice president and president of Global Operations, said in a statement.

The company said it still has an ample selection of trucks at U.S. dealerships. At the current sales rate, Ford Motor Co. has enough trucks to last 84 days.

The company said Wednesday that the parts shortage and production cuts will have a short-term impact on earnings, but Ford is sticking with full-year guidance of adjusted earnings per share of $1.45 to $1.70.

While the auto industry has a history of working around parts shortages from natural disasters and fires, it may be more difficult this time because there are few companies that produce magnesium parts, said Kristen Dziczek, vice president of the Center for Automotive Research’s Industry, Labor & Economics Group.

“There’s a lot of demand for these light-weighting materials,” she said. “Everybody needs it. Everybody wants it, and the supply chain isn’t mature yet for this kind of volume.”

Equipment that wasn’t damaged will have to be relocated and automakers will have to find another place to get magnesium castings, Dziczek said. Meridian has other buildings in Eaton Rapids and another magnesium plant in Ontario, but it’s unclear how much volume they can pick up, she said.

A message was left Thursday for officials at Meridian.

Fiat Chrysler confirmed that Pacifica production had been affected but said no workers had been laid off. Instead, they’ll make more of an older minivan as the company works with Meridian to get more Pacifica parts.

But a union official at a Jeep Wrangler SUV plant in Toledo, Ohio, say it’s possible some weekend overtime shifts could be cut due to parts shortages. Mark Epley, Jeep unit chairman for United Auto Workers Local 12, said Thursday they’ve got parts and still are running 10-hour shifts. “This weekend may be a different story,” he said.

At GM’s Wentzville, Missouri, factory, the company has been forced to cut production of the GMC Savana and Chevrolet Express big vans. But workers there have shifted to building midsize pickup trucks that come down the same assembly line, said spokesman Nick Richards. It’s not clear how long van production will be suspended, he said.

BMW said it’s working to find other sources for magnesium parts but until supplies stabilize, it won’t build as many X5 and X6 SUVs. X3 and X4 production won’t be affected.

Ford expects to continue Super Duty production at a factory in Avon Lake, Ohio, near Cleveland.

The cause of the fire at the Meridian plant isn’t known. Authorities said there were explosions and two workers were hurt. People reported feeling the blasts miles away.

John Seewer contributed to this report from Toledo, Ohio. 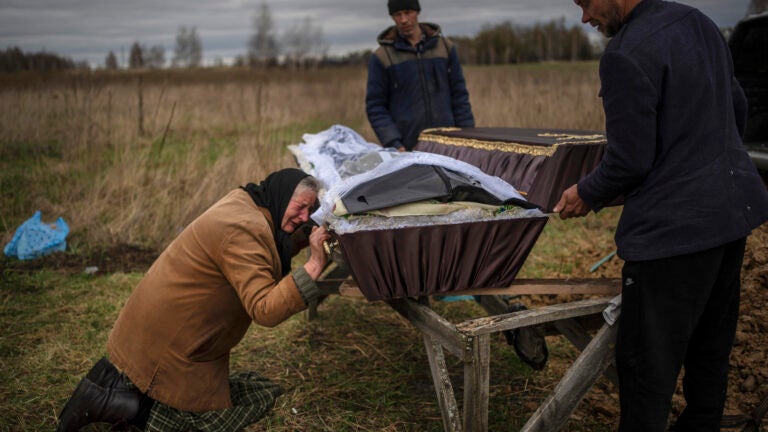 Explainer: At 100 days, Russia-Ukraine war by the numbers