Cars need to get faster — not on the road, but on the inside.

Speed has always been part of the mystique of the automotive business. But cars have been notoriously slow when it comes to handling information. It is a problem that has only become more pressing as the era of autonomous vehicles looms, with competing interests racing to be the first with a solution.

Cars have long relied on a relatively simple network standard called the CAN or Controller Area Network bus. The CAN bus coordinates all the microprocessors and electronic control units, or ECUs, that need to trade engine, powertrain, and diagnostic information, transmitting details like transmission status and fluid levels. As more electronics like window and seat controls were added to cars, the CAN bus was tweaked over the years with additional local interconnection networks, or LINs, to handle the swelling communications load.

But the CAN bus, which was originally developed by Bosch more than 33 years ago, is showing its age.

“But when every new feature gets added, you add a new ECU and a new layer of wiring,” said Jack Weast, the chief systems architect for autonomous driving solutions at Intel. That approach is inefficient, expensive, heavy — and still slow. “So from a connectivity point of view there’s a need to re-architect the vehicle from the inside out,” Weast said.

Underscoring the urgency for a new high-speed network in cars is the coming wave of autonomous driving systems.

A test drive through congested Manhattan streets with Austin Russell, chief executive of the lidar company Luminar, demonstrated just how much more data is going to be generated inside self-driving vehicles. Prowling the Upper West Side, a car fitted with Luminar’s lidar system, which uses near-infrared light to detect objects around it, created high-resolution scans of thousands of data points 10 times a second, painting a 3-D picture of cyclists, pedestrians, street vendors and even dogs up to 800 feet ahead.

“You have to have ridiculous, superhuman sensors to make up for the fact that computers aren’t nearly as smart as humans — and won’t be for a very, very long time,” said Russell, as the car’s sensor swept the crowded blocks ahead on Central Park West.

That means more sensors — and more data. Experimental designs for autonomous cars incorporate as many as 16 video cameras, 12 radar sensors, half a dozen ultrasonic sensors, and four or five lidar sensors. And still more sensors and scanners might be necessary to make self-driving cars impervious to exigencies like blinding blizzards and soaking downpours.

“We have seen an explosion in data bandwidth,” said Lee Bauer, a vice president at Aptiv, a supplier of autonomous and driver-assistance systems. Bauer cited what has become a mantra among autonomous vehicle engineers: Self-driving cars will generate 4 terabytes of data per hour. That includes live information about road conditions, weather, objects around them, traffic and street signs — all of which has to be shared among components in the car and used to make split-second driving decisions.

Automakers are aware of the coming data tsunami.

“They think we need 300 teraflops of computing power,” said Willard Tu, a senior director at chip supplier Xilinx. A teraflop is a trillion operations per second, which means that every vehicle would be a rolling supercomputer. “So the type of pipe and the diameter of that pipe” that is going to connect all these components, Tu said, “has to be very flexible.” Estimates for how big that pipe needs to be range from 25 to 40 or more gigabytes per second.

The catch? “No one’s solved the problem of how do I stream all that data to the central processor?” Tu said.

While engineers and automakers agree that today’s cars need to be completely rewired, the question for many is, with what?

Optical fiber offers some of the highest speeds and lightweight cabling. But fiber is expensive and fragile; humidity, vibration, and dust in its connectors can all lead to signal loss, said Amir Bar-Niv, a spokesman for semiconductor firm Aquantia. Some luxury brands have tried optical fiber with mixed results. “So automakers have said they are not going to have fiber in the car,” he said.

By far the most popular candidate for a car’s internal network wiring is still copper. Although copper faces some challenges transmitting high-speed data over long distances, the lengths required in most cars are relatively short, and automakers have decades of experience working with it.

Perhaps more important than the physical cabling is the type of network protocol cars should use to speed up the flow of information. The most common local area network protocol is Ethernet, the same format that has been a business and home networking standard for decades. But most current Ethernet networks typically have a top speed of 1 gigabit per second (Gbps) — not fast enough to handle the torrent of data that an autonomous vehicle would produce.

To help speed things up — and encourage the use of Ethernet — several companies recently formed the Networking for Autonomous Vehicles Alliance. The NAV Alliance includes leading parts and systems suppliers like Bosch and Continental, as well as the chip makers Nvidia and Aquantia — and the world’s largest automaker, Volkswagen. The goal is to get the industry to coalesce around a faster Multi-Gig Automotive Ethernet network standard with initial proposed speeds of 2.5 Gbps and eventually 10 Gbps.

There are other contenders to rewire the automotive industry, however, such as HDBaseT. Initially developed to handle high-resolution video and audio, HDBaseT can also transmit power and Ethernet-based communications — up to 6 Gbps — over unshielded copper cables. Developed by Valens, HDBaseT has garnered support from major consumer electronics companies, including LG Electronics, Sony, and Samsung Electronics, which has also been investing heavily in autonomous car technology. HDBaseT’s supporters also believe updated versions will quickly reach speeds of 20 Gbps and 40 Gbps.

There’s a potential windfall for whoever wins the race to bring high-speed networks to cars, which will create a market for millions of new connecting chips, gateways, and controllers to support the new standard. It’s what companies like Aquantia, Valens and Xilinx are hoping for.

Flexibility may ultimately be the deciding factor. The old CAN and LIN networks aren’t likely to be abandoned soon, said Bobby Hambrick, chief executive of AutonomouStuff.

“The CAN bus will be used for really basic stuff and LIN will control the horn or blinkers because the chips for those are really cheap,” said Hambrick, whose company builds autonomous car platforms, including the open-source Apollo platform from the Chinese firm Baidu. Any new high-speed Ethernet or HDBaseT network, he said, will have to be backward compatible with those systems.

Furthermore, the components and sensors needed for self-driving cars and trucks — and how all that information should be managed and interpreted — is far from set in stone. Most companies haven’t committed to particular types of cameras or lidar sensors for their future autonomous cars, so any new network will have to accommodate a variety of components.

“I go to two carmakers, and I get three different opinions” about what kind of system they want, Bar-Niv said. “But they all want a high-speed network.” 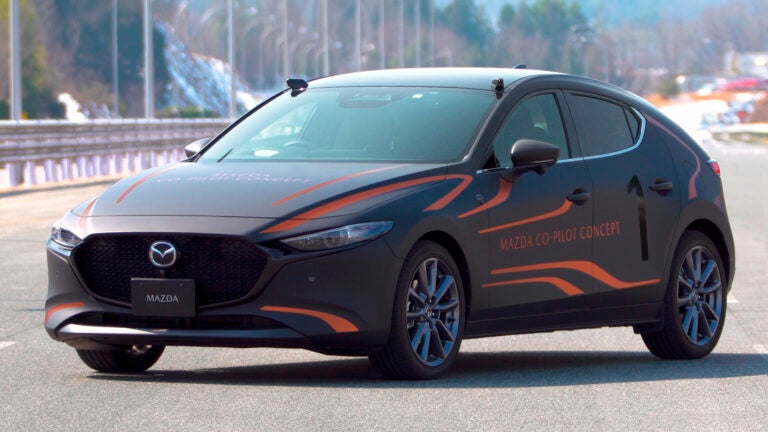