Now that director James Mangold’s new movie “Ford v Ferrari” has hit theaters, car nuts may find themselves asking where the filmmakers found all those classic Carroll Shelby race cars from the 1960s, which sell for millions of dollars when they become available.

They didn’t. The filmmakers borrowed modern versions of those vehicles from Irvine-based Shelby Legendary Cars and its parent company, Superformance, the only companies in the world licensed by the legendary race car designer to build and sell new versions of the Ford GT40s and Cobras that made their namesake into a supercar superhero.

Many of the featured cars driven in the movie — the Shelby Cobra that Miles races, the Ford GTs that he and Shelby design and test in California, and many of the vehicles that battle for the 1966 Le Mans title — were built in South Africa and imported to the U.S.

But don’t call them “replicas” or “kit cars.” Variations of the Cobras and GT40s can be had in those forms, but these are “continuation cars,” Shelby Legendary Cars Chief Executive Lance Stander insists — real Shelby cars, built exactly as Shelby intended, with official Shelby chassis numbers, just like the originals.

Thanks to the complexities of American import laws regarding automobiles, however, the base prices for those vehicles don’t include all the parts. Stander says he sells the cars on a “turnkey minus” basis, meaning that SLC delivers a rolling chassis. The SLC cars are sold through one of its affiliated dealers — Hillbank Motor Sports, another Stander corporation, for example — and then it advises the buyer on how and where to buy an engine and transmission and have them installed. 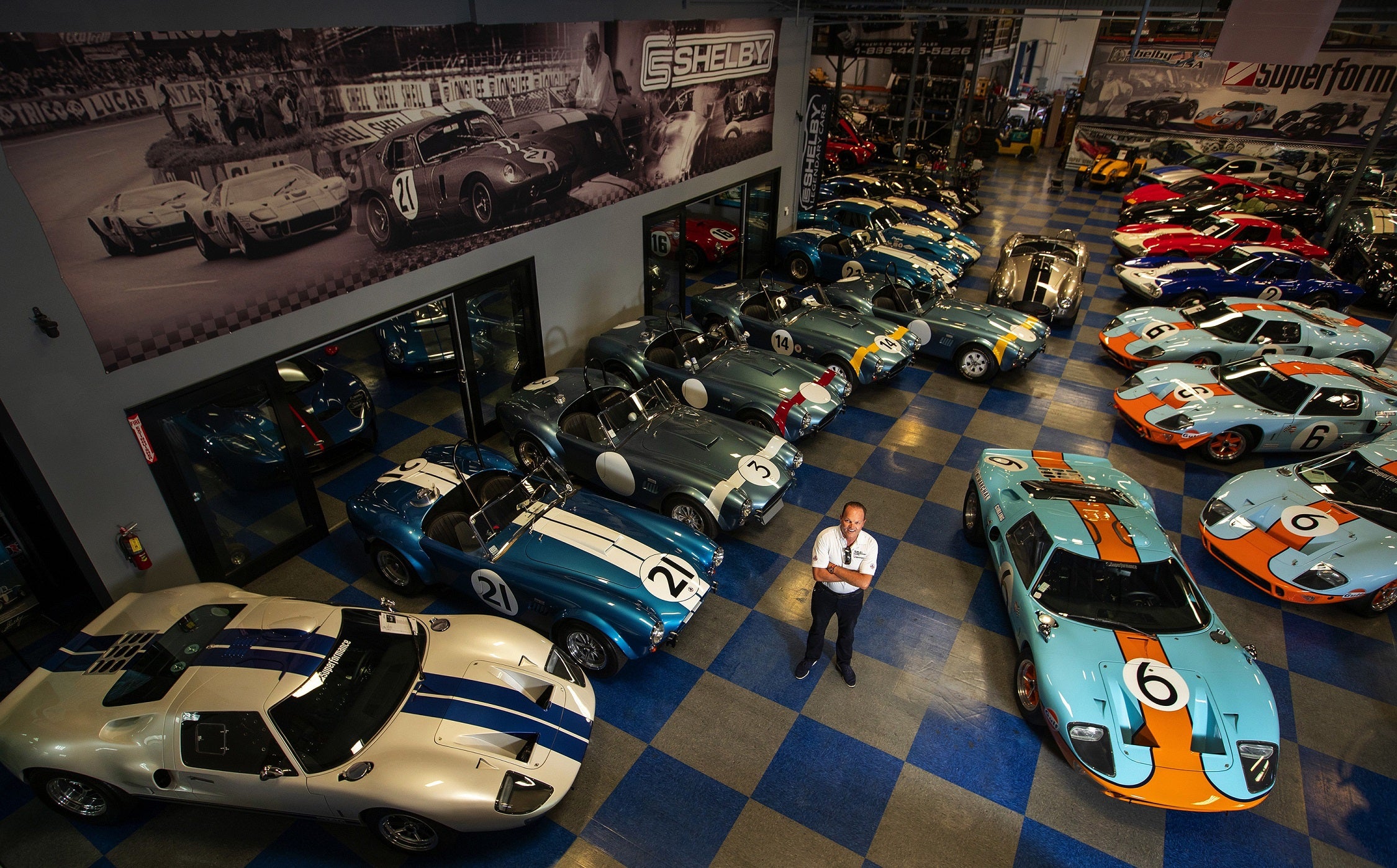 Stander says he’s brought about 5,000 cars to the U.S. in this way. Most have remained here, a lot of them in California. About 1,000 were exported, to China, South America, Australia, the United Arab Emirates or the U.K., Stander says.

The colorful CEO came to America from his native South Africa 20 years ago — “I am African American, just not from Inglewood,” he says — intending to enter the auto salvage business, but soon shifting to auto sales.

It was in his blood. The family fortune, established by his father’s Hillbank Motor Corp., was in auto sales. It seems a natural fit. Stander has a broad smile and a salesman’s patter. “I have a big mouth. I’m a used car dealer!” he says.

He’d had some early exposure to the Shelby cars in his home country, when Hillbank took a Cobra as a trade-in. “I thought it was a piece of junk, until I drove it,” he said. 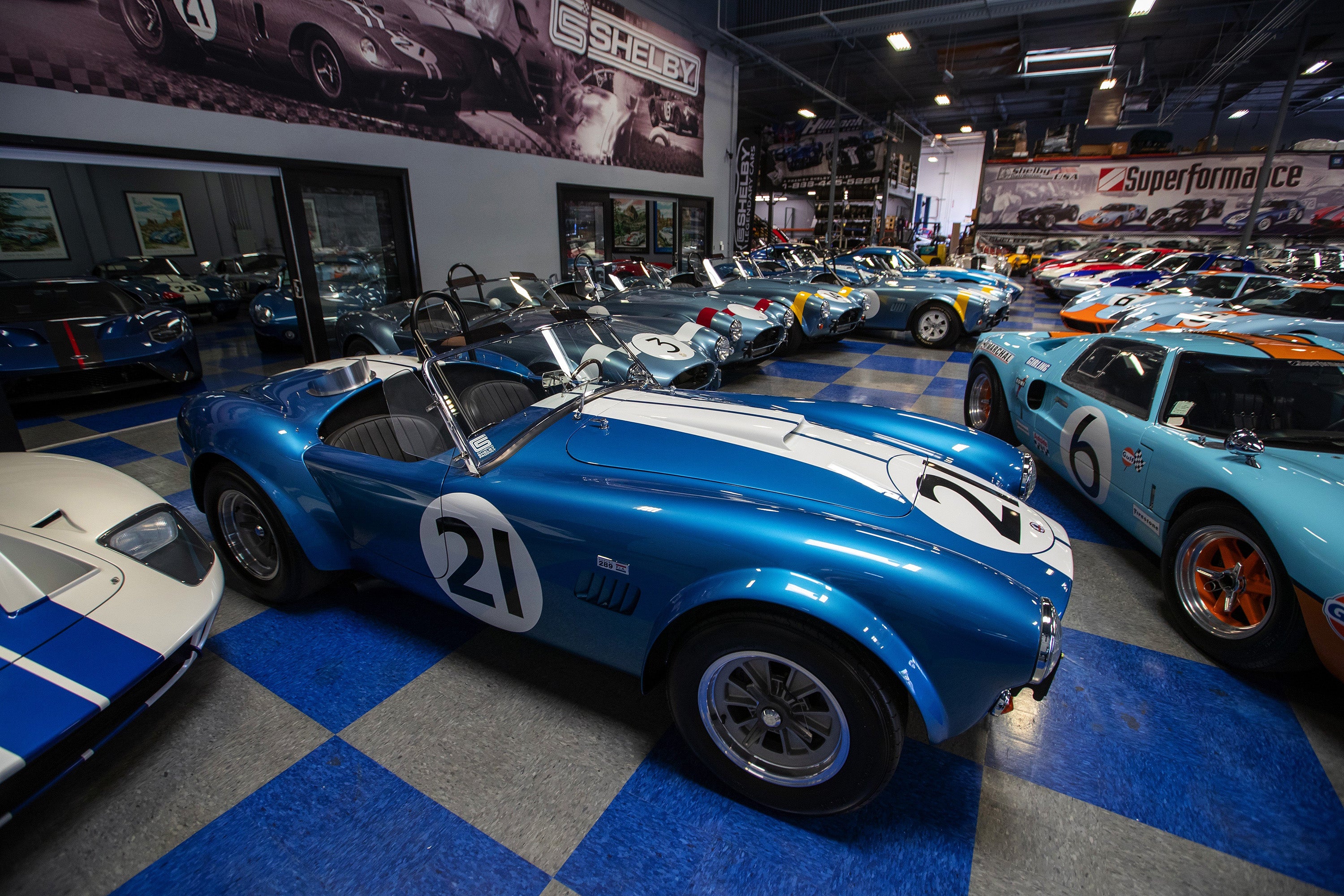 Soon he was selling continuation Cobras, GT40s and Daytonas. (His companies are also licensed to manufacture the later Ford GR1, as well as a Corvette Grand Sport roadster.)

Some of the customers, he says, are wealthy car collectors who actually own the multimillion-dollar originals. If you see one on display, in a parade or TV or magazine ad, Stander says, “It’s probably one of ours. The other ones never leave the vault.”

At this year’s Le Mans Ford GT Revival meeting in Spa, Belgium, Stander said, at least 20 of his GT40s were on the track — some perhaps masquerading as original 1960s models.

The Shelby Cobras have sold for even more. The first unit ever built went for $13.75 million at a Monterey auction in 2016.

Based on auction sale prices combined with the rates at which owners are insuring those vehicles, Wiley said the current estimated average value for a used continuation Cobra is $122,000, which represents a 65 percent appreciation in value over 10 years. The average value for a 1965 original Cobra, Wiley said, is $1.9 million, up 72 percent over the same period.

That seems like a good return on investment, but Hagerty numbers show the average appreciation rate for all the classic cars in its database has been 128 percent from 2009 to 2019. The authentic and continuation Cobras are ahead of American muscle cars, for example, but well behind Italian sports cars.

The “Ford v Ferrari” filmmakers needed a lot of Cobras, GT40s and other period vehicles to shoot their extensive racing scenes, and to populate the non-race street scenes as well. For that, they turned to Rob Johnson, veteran set designer (“Avatar,” “Tron” and many more), who acted as vehicle art director on the movie.

Johnson said the filmmakers leased, bought or borrowed 423 vehicles, 50 of them race cars — not just GT40s and Cobras, but Ferraris, Porsches, Mustangs, Corvette Stingrays, Triumiles per hours and even a Volvo. Many of these had to appear in actual race sequences, running at grueling speeds, for extended periods.

“Because of the performance and stunt requirements for the vehicles in filming, nothing precious could be used,” Johnson said. “We needed cars that could go 200 miles per hour, without crapping out, for days on end.”

Stander’s companies leased the filmmakers six Cobras and two GT40s, Stander said, as well as two Daytonas and six Mustangs. Many of the other race vehicles came from Race Car Replicas in Michigan, Johnson said.

Johnson said the RCR cars are very good replicas, but the South African-made SLC continuation cars were exact reproductions, down to such details as period-correct nuts, bolts and welds that wouldn’t be visible even in the closest close-ups filmed during “hero” sequences featuring stars Damon or Bale behind the wheel.

But RCR was able to supply a broader array of vehicles, Johnson said, including vintage Ferraris and Porsches. Additional vehicles came from Sun Valley’s Ghostlight.

“Ford v Ferrari” may provide a small boost to the value of the Shelby continuation cars and the originals, said Hagerty’s Wiley.

“There is a lot of interest in the movie among car enthusiasts, and screen time increases awareness of the cars,” he said.