In the race away from fossil fuels, Toyota Motor Corp. is banking on hydrogen, with an ambitious goal of selling 30,000 fuel-cell vehicles a year by about 2020.

At first glance, it’s easy to mistake the 2018 Toyota Mirai for a new version of the Prius, but this fuel-cell vehicle burns hydrogen, which mixes with oxygen in the air to generate electricity that powers the motor while also creating heat and water as byproducts.

According to Morry Markowitz, president of the Fuel Cell and Hydrogen Energy Association, it is “possible, but not advisable” to drink that water. The caution was on account of the chemicals that line the exhaust pipe, but the water is theoretically drinkable. 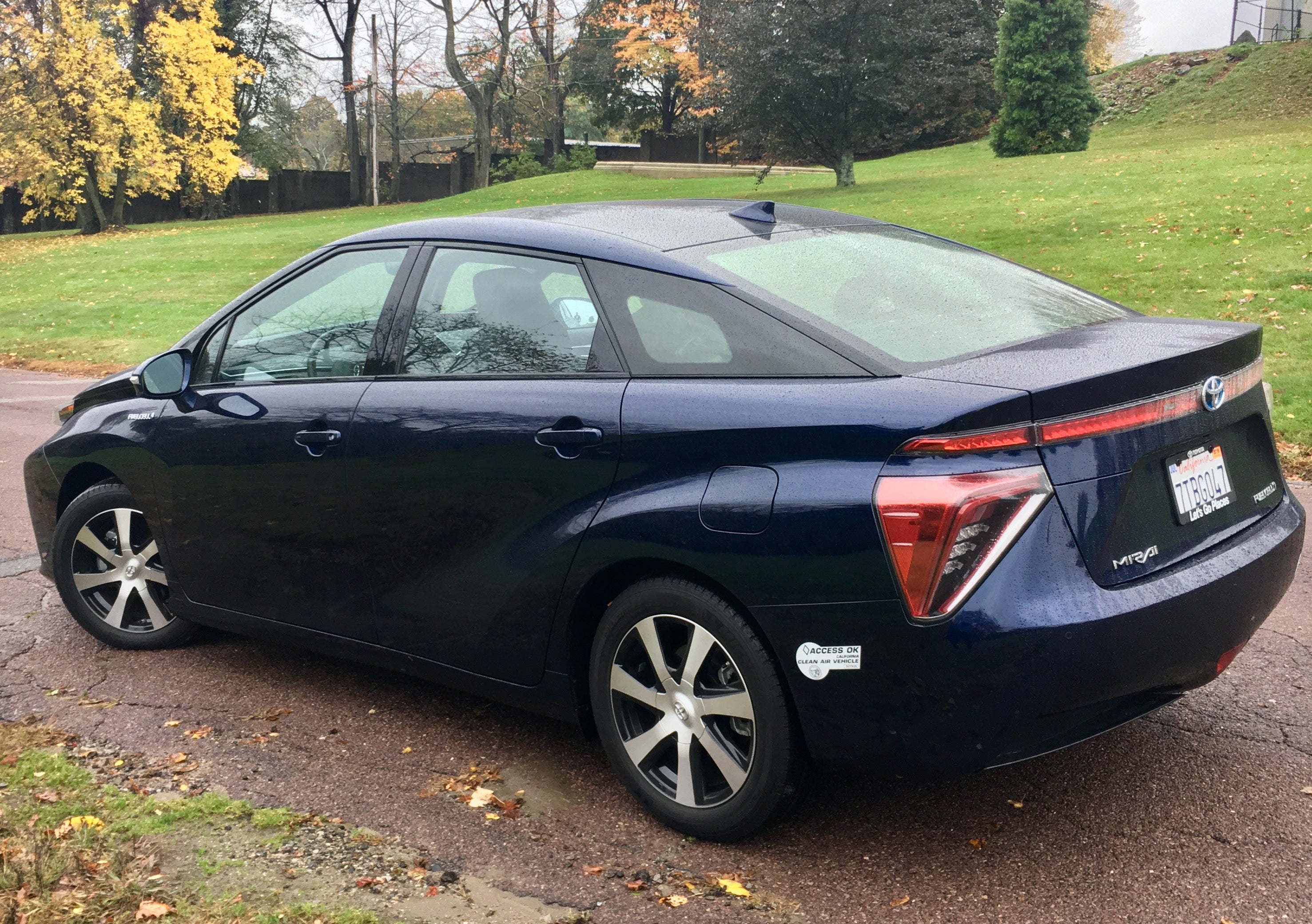 The Mirai’s only emissions are water vapor.

Driving the Mirai isn’t all that different than driving the Toyota Prius on which it is based. The smooth electric power delivery is there, and the look and feel is very much derived from Toyota’s iconic hybrid.

Inside, the similarities are strong. From the central instrument panel to the “floating” center console to the shifter design, everything is inspired by or directly borrowed from Toyota’s iconic hybrid. The connection makes sense — the best way to bring over early adopters from within the Toyota brand is to make it feel familiar. For newcomers, it is a sensible layout with logical placement of controls and an easy-to-use infotainment system.

The Mirai is simply an electric hybrid, but gets its electricity from a far different source. Hydrogen from two tanks — one under the rear seats and one under the trunk — is combined with oxygen in the fuel cell stack beneath the driver and front passenger, and the result is electricity. The fuel cell stack can directly power the electric motor at the front wheels or work in tandem with the battery pack in high-load situations. 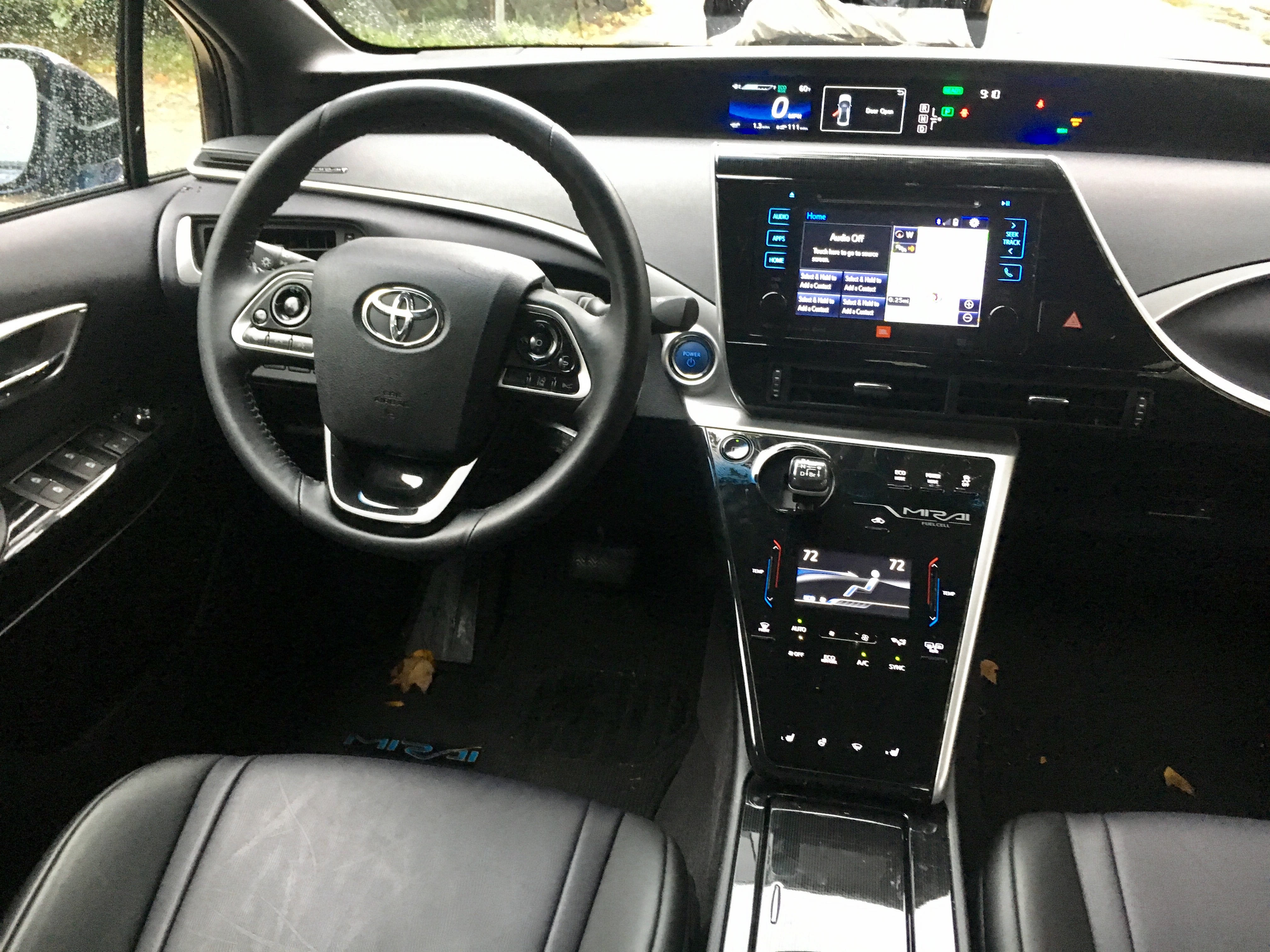 Like the exterior, the cabin of the Mirai shares characteristics with the Toyota Prius.

The way it drives is … mostly like a hybrid or EV. Its acceleration is brisk and nearly silent. Through the power of electrons and low-end torque, we were able to spin the wheels pulling away from a green light. Sure, the roads were a little wet, but it was still surprising.

Cornering is composed, too. There is not much body roll, and the car absorbs most bumps on the road. The Mirai also uses regenerative braking to capture the brake energy from decelerating, storing it in the battery for later use. As such, braking is a little numb but plenty strong.

Toyota claims a 312-mile range and a combined fuel economy of 67 MPGe (miles per gallon equivalent). That fuel economy figure requires some context: Even in Los Angeles, one of the few areas with established hydrogen infrastructure, prices vary greatly. Some locations even use a different unit of measurement. There’s still much work to be done to make this an easy fuel solution for drivers to understand. 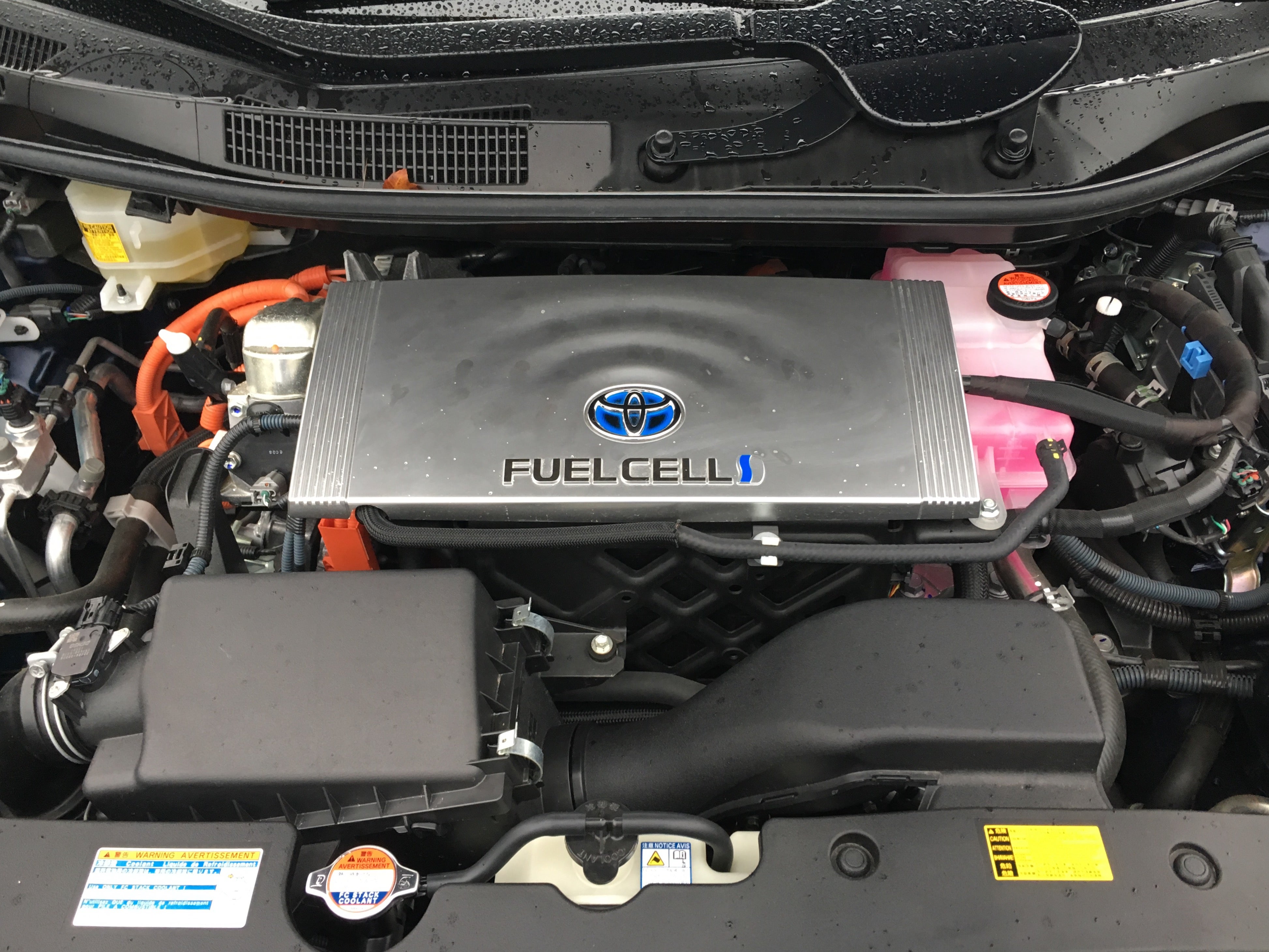 The electric motor of the Mirai is up front. Other components are under the seats and trunk.

As for the vehicle itself, the 2017 Toyota Mirai has a starting price of $57,500. To sweeten the deal, Toyota is throwing in $15,000 or three years of complementary fuel. Some states have specific rebates, too. Massachusetts offers rebates as part of the MOR-EV program. It provides a list of eligible cars, including the corresponding rebate. The Mirai is eligible for a $2,500 rebate in the program.

If you’ve spent any time in the Prius, the Mirai will be a smooth transition. The real hopes of success come from the proliferation of fueling stations. When the Prius and EVs first arrived, gas stations and power outlets were already plentiful. The future for the Mirai is inexorably linked to the development of its infrastructure. 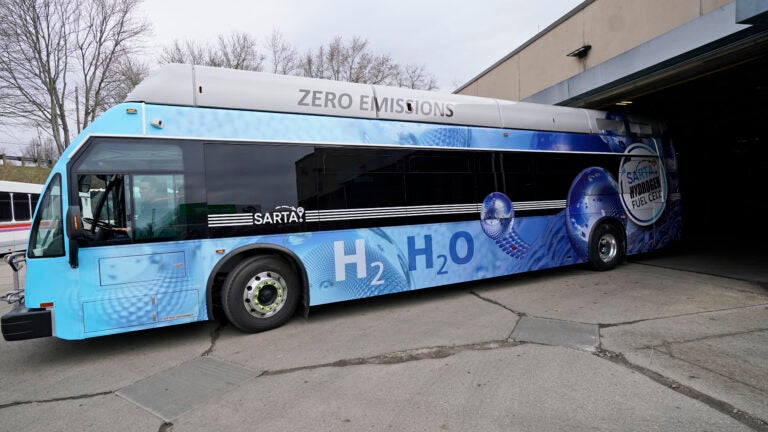