The redesigned-for-2018 Chevrolet Traverse is one of four updated crossover and SUV models from the bow-tie brand, joining Trax, Bolt EV, and Equinox.

Improvements over the first- and second-generation Traverse models are significant. First, there’s the updated drivetrain. Earlier models were equipped with outdated 3.5-liter V6 engines and six-speed automatic gearboxes, which crushed any hope of comfort while driving long distances. The new model has a 3.6-liter V6 paired with a nine-speed automatic transmission, which provides road-tripping bliss. In our time test-driving the Traverse, we found its form and function are all about comfort and control, especially given the major upgrades over the previous model.

The most obvious updates come in the form of overhauled styling. The new Traverse is offered in seven trims: L, LS, LT Cloth, LT Leather, RS, Premier, and finally, High Country, which adds a luxurious feeling that you otherwise might not associate with Chevrolet. An available 7- or 8-inch MyLink infotainment system supports Apple CarPlay and Android Auto, but responsiveness is lacking. After a few hours of use, plugging in and removing a phone prompted delays and necessary system restarts.

The Traverse is a large SUV, and it has storage capacity to match. With 98.2 cubic feet of space behind the first row, 57.8 behind the second row, and 23 behind the third row, the Traverse can fit just about anything you throw into it. Those numbers award the Chevrolet Traverse “best-in-class” for cargo volume, according to U.S. News & World Report. The Traverse also offers 5,000 pounds of towing capacity when things don’t quite fit inside. 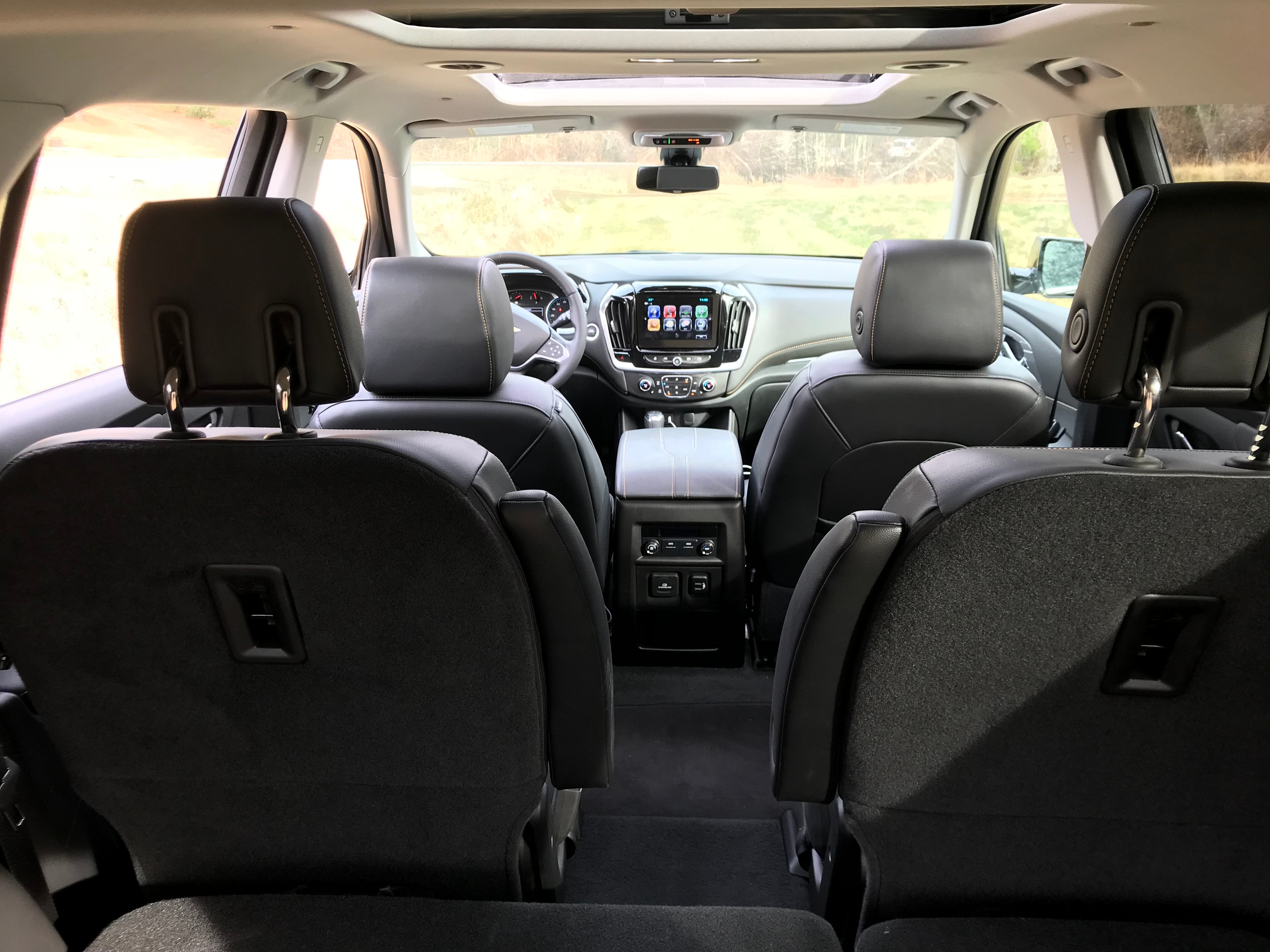 The interior of the Traverse has more cargo space than any other SUV in its class.

What the experts are saying:

“Fully redesigned for 2018, the Chevrolet Traverse kicks off its new generation as one of the best in the class. Whether you buy it as a value-packed eight-seat SUV or roll with the versatile seven-seat version, you get gobs of cargo space and good-natured driving dynamics.“ — U.S. News & World Report

“The Traverse provides buyers a comfortable, well-equipped, mid-size, seven-seat SUV with excellent safety, value, and utility for the money. I especially like the reassurance of Chevrolet’s OnStar, teen driver configuration, and onboard Wi-Fi availability.” —Rebecca Lindland, executive analyst, Cox Automotive 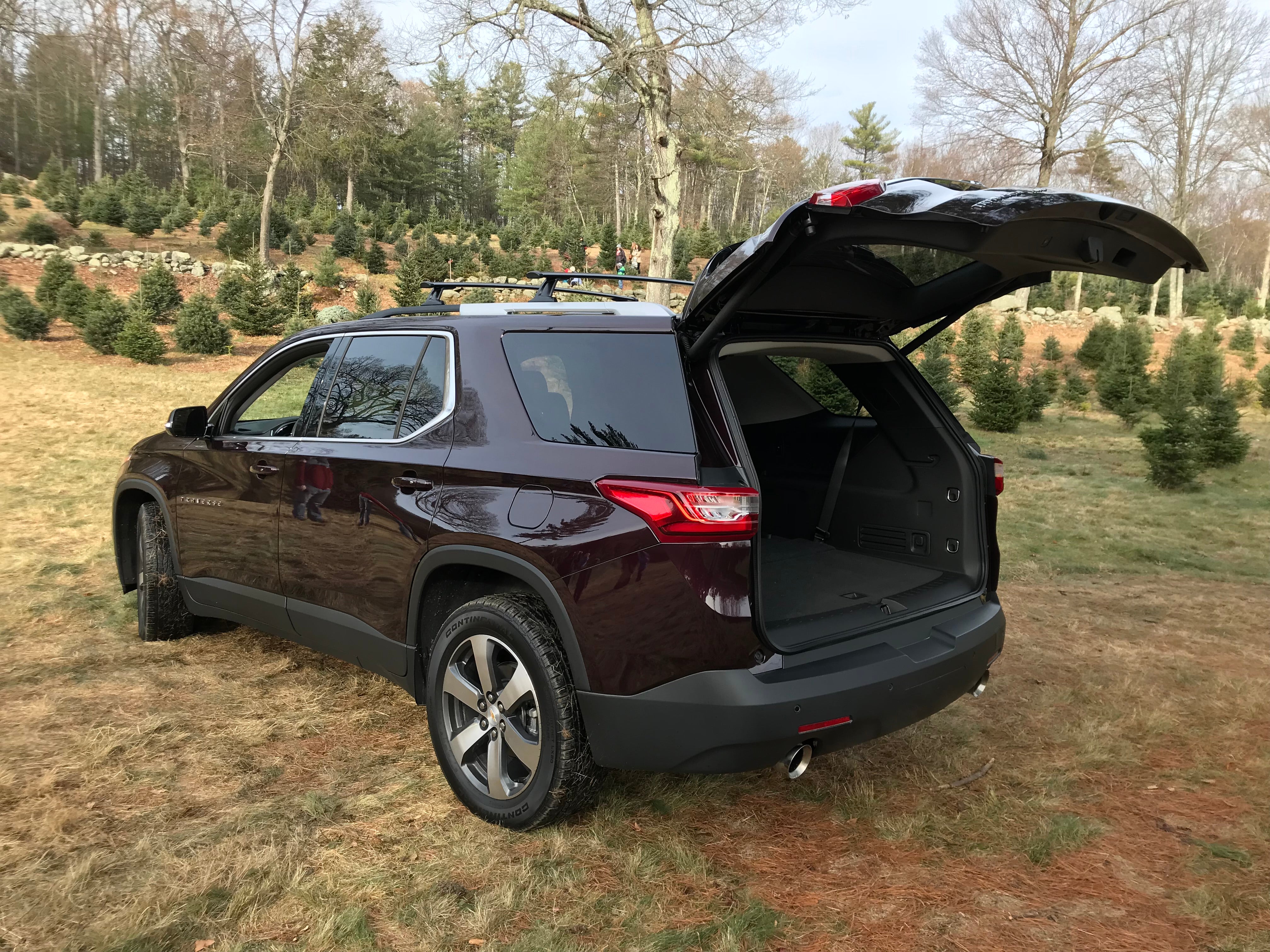 The rear hatch opens high and wide for ease of loading and unloading your belongings.

Volkswagen Atlas: The Volkswagen Atlas is the way to go if you’re looking for a sportier ride. The ride quality is smooth but still sharp around corners. Improvements in handling come with a sacrifice in power. The optional 3.6-liter V6 in the Atlas only puts out 276-horsepower compared to 310-horsepower from the American V6.

Mazda CX-9: Mazda’s largest SUV is surprisingly exciting to drive, but like the Atlas, it’s down on power compared to the Traverse — at least on paper. When you drive both, you quickly realize the CX-9′s turbocharged engine surges past the American’s and German’s with 310 pound-feet of torque, compared with an identical 266 pound-feet from both 3.6-liter V6s.