In transportation, there are moments. Maybe not moments of earth-shattering breakthrough like curing polio or the Berlin Wall falling or men walking around Tranquility Base, but moments, nonetheless. Audi’s pure electric E-tron SUV is one such moment.

The 2019 E-tron marks the first in a coming wave of pure electric vehicles from luxury carmakers that offer real range, little compromise, and the full embrace of electric power. It also marks a kind of rehabilitation of the greater VW Group after the diesel-emissions cheating scandal that broke in the autumn of 2015. So, if you’re a future-thinker, think of this as their anno domini.

But Audi is hardly alone. Tesla has led the way down electric avenue and Jaguar launched its pure electric I-Pace crossover earlier this year. Mercedes will have an entry next year with the EQC based on the GLC crossover SUV, which we also look forward to testing.

The hefty business here is under the floor, where the E-tron’s battery pack sits. At more than seven-feet long, five-feet wide, and over a foot deep, this 95-kilowatt-per-hour battery sits in a latticed aluminum tray under the vehicle. The battery has its own crash structure and strategy, which also separates its cooling circuit in the event of a heavy crash so that no chemical incident happens as a result. The battery alone weighs more than 1,500 pounds, but hell, it’s got its own safety strategy.

While on the weight topic, the E-tron’s total preliminary curb weight of 5,490 pounds is nearly as much as a Tesla Model X and in the ballpark of a large Chevy Tahoe, making it quite the heavyweight. Unfortunately, high weight means giving up some total range. Audi states a fairly healthy 249 miles per full battery charge in the WLTP cycle test used in Europe. An official American figure using U.S. test standards will likely result in slightly lesser range, but that testing has not been concluded yet.

The E-tron can use either AC or DC charging and is capable of fast charging on DC current at up to 150 kilowatts when available at certain high-speed stations. This type of charging delivers a maximum of 80-percent charge in about 30 minutes.

The power of silence 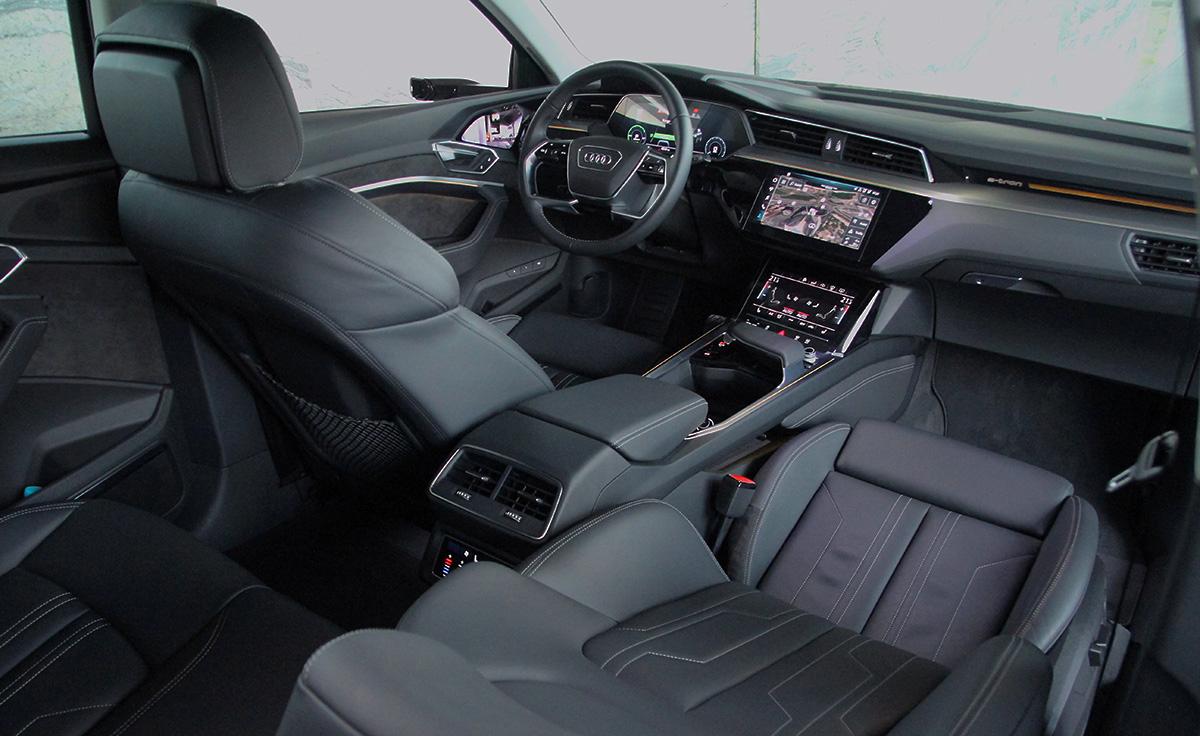 With no pistons being shoved up and down nor cams, rods, and crankshafts whirring, the E-tron nonetheless uses sound deadening; the lack of combustion makes other noises more noticeable.

Compared to a combustion-engine car, the E-tron uses more extensive sound isolation materials throughout. However, it’s not that the electric motors and the transmission are noisier. In fact, it’s quite the opposite.

Because there aren’t spark plugs sparking, no injectors clicking, no fuel igniting, and no sudden driveline transfers and enormous loadings of crankshaft rotation to the transmission, the effective noise floor (or baseline noise level) of the powertrain is much lower. Other noises become far more noticeable and therefore require quelling. The electronic controls themselves produce much higher frequencies and therefore require new specific sound deadening, too.

In all but the sportier Drive Select settings, the E-tron’s first inch or so of throttle response is timid, which makes total sense in a car whose very existence is an efficiency play. Being electric, though, maximum torque from the motors is available more or less instantly, so if you fully prod the throttle through the floor, there is essentially no lag.

The E-tron’s two electric motors generate a maximum of 402 horsepower and 490 pound-feet of torque in “boost” mode, netting acceleration of 5.7 seconds to 60 miles per hour. That’s brisk by any definition, and the E-tron certainly accelerates with authority and silence, though blinding speed is not of great importance to most electric car shoppers.

Interestingly, the motors normally operate at a slightly lower output level of 168 horsepower and 194 horsepower front/rear, though in “boost” mode, they can jump to 181 horsepower and 221 horsepower front/rear for up to nine seconds, Audi says. Operating in boost mode for longer duration on multiple occasions would stress the battery over the long haul, causing it to degrade and therefore resist taking a full charge. Some other electric car makers do not limit top-level power, but they risk battery degradation over the life of the car, and Audi chose a more conservative approach here.

It doesn’t rip your face off like a muscle car, but the sensation of acceleration is heightened by the absence of a combustion engine containing, well, controlled explosions thousands of times per minute. The E-tron accelerates, handles, and stops like a good sports sedan. Even though you feel the prodigious weight, it keeps gripping the road in switchbacks well beyond what the weight figures might have a journalist suspect.

The E-tron also covers some off-roading capability, as we learned in the desert near Abu Dhabi. Soft surfaces like loose sand are not a forte, what with its road-focused tires and nearly 5,500 pounds of weight, but rocky terrain and mild off-roading are no problem as the E-tron can raise itself on its standard air springs two inches from normal ride height in the dedicated off-road driving setting. 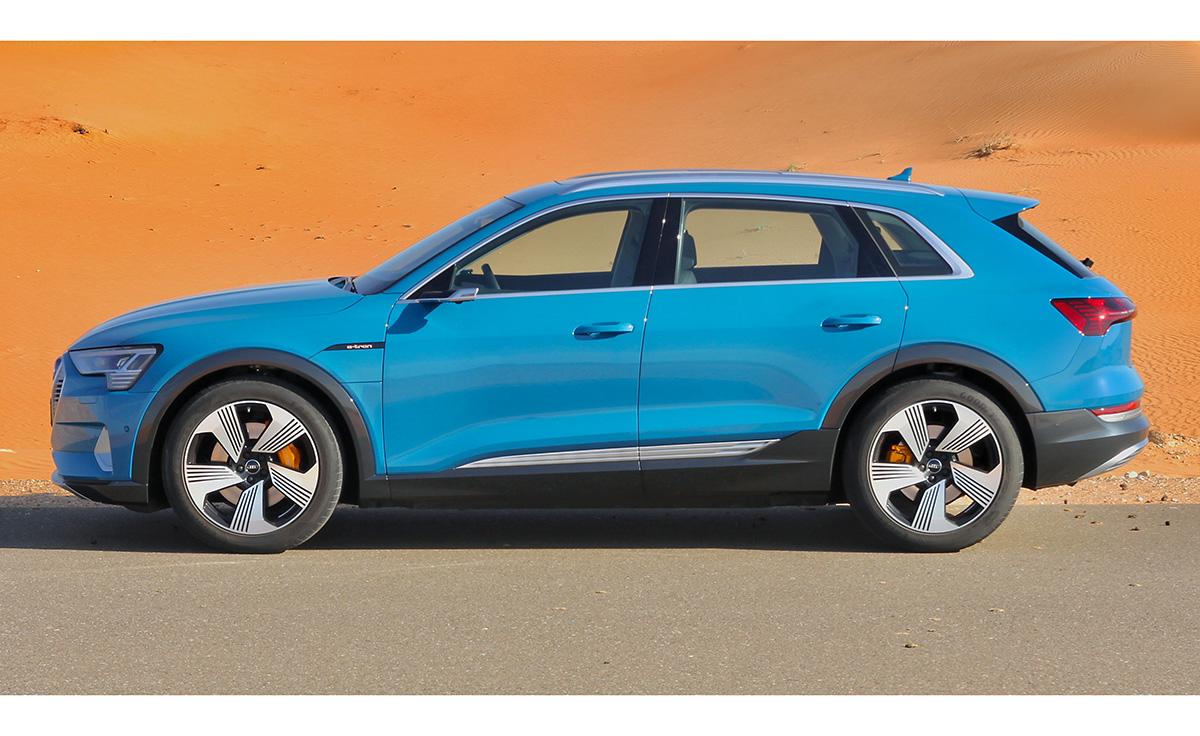 The E-tron’s brakes use a slightly different strategy than a conventional hybrid’s, which recover energy through brake application. In the E-tron, brake application of up to 0.3 g deceleration is actually generated by the electric motors, adding energy back to the battery. Beyond that 0.3-g level, the actual brakes start playing.

During a run down one of the United Arab Emirates’ few mountain ranges, we sampled the complex recuperative energy program. Despite also driving very briskly and expending a lot of energy accelerating over a 10-minute period, we still managed to tack on an extra four kms by the end of the slope from when we started. So downhill energy recuperation is a real thing in the E-tron.

Clear and straightforward: interior design based on clarity 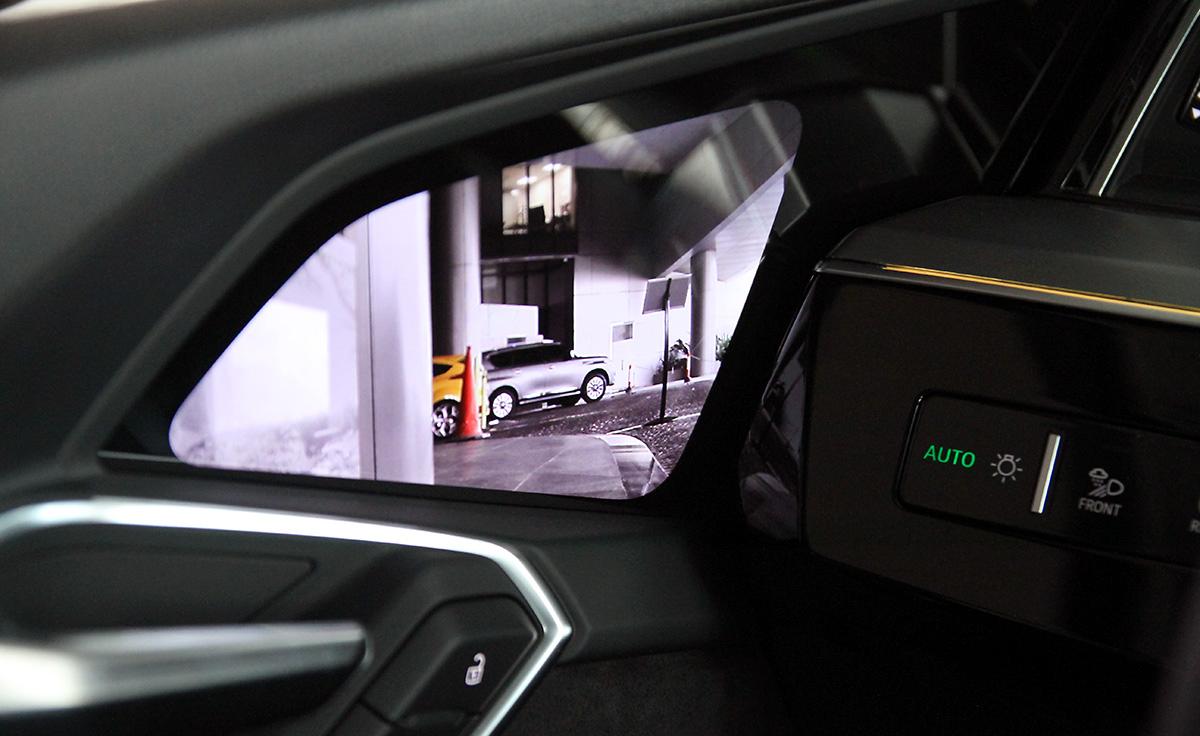 Like other new Audis, E-tron uses a new infotainment system based on smartphone-like twin touchscreens. Side mirrors using LED screens in doors instead of glass? Odd in use.

Size-wise, the E-tron pokes into the middle of the midsize five-seat luxury crossover party. It’s based on a heavily modified platform shared with the Q5 and Q7, though a tiny bit smaller than the new Q8 SUV, while five-inches shorter than the Tesla Model X.

The E-tron’s octagonal grille is a grille mostly in name; there’s little cooling flow needed, as with a conventional engine. At the sides of the E-tron, character lines climb towards the rear and the rear fender blisters are a subtle reminder to those on the Bentley Bentayga.

The interior is thoroughly Audiesque; elegant in its clarity. Like the recently introduced A6, A7, and A8, the E-tron uses Audi’s latest MMI infotainment interface that has an upper and lower touchscreen akin to a smartphone to control audio, navigation, phone, driving programs, vehicle settings, and climate controls. Compared to any Tesla, the E-tron is head, shoulders, and waist above on the inside.

One bit of digital tech in the E-trons tested are electronic side mirrors that use external cameras instead of reflective glass. The images are rendered in an OLED (advanced LED) display at the leading edge of the inside door panels where it meets the door frame. Perhaps great in theory, they provide little depth perception, are placed much lower than expected, and cannot be adjusted to appear as bright as even the rest of the digital instrumentation. But fear not; they will be unavailable on U.S.-bound E-trons.

E-tron customers will receive 1000 kWh of free charging from Audi and Electrify America, which can be picked up after that point through Amazon via 500 fast-charging facilities either being built or already completed across America by July 2019.

As a total, no-excuses luxury crossover SUV, the E-tron works, hitting a unique mark; pricing starts at $75,795 for the Premium Plus trim, with the top-optioned Prestige model coming in at $82,795.

Is the E-tron compelling? Very. Expensive? Not terribly, judging by other European crossover SUVs in roughly the same size class.

The only question remains the official range rating, likely to dip below the EU version’s 249 miles when fully certified.

Excuses to embrace the pure electric car are surely dwindling.