You’d have to be a child to believe that Superman could change into a suit, throw on a pair of glasses and not be recognized. If it were really that easy to hide someone in plain site, those who work in the federal government’s witness protection program would have a much easier job. That said, if you were a member of the witness protection program, the unassuming Jaguar XE compact sedan would help you melt into the crowd; its sedate looks lack the usual Jaguar panache.

However, add the phrase “SV Project 8” to the end of its name, and the mild-mannered XE is transformed into a wild-mannered four-door track car, not unlike when Popeye eats spinach. Suddenly, the XE is all muscles, sporting vents, grilles, aero aids and a not-inconspicuous rear wing. Its intentions couldn’t be clearer, especially for those of us with Y-chromosomes. 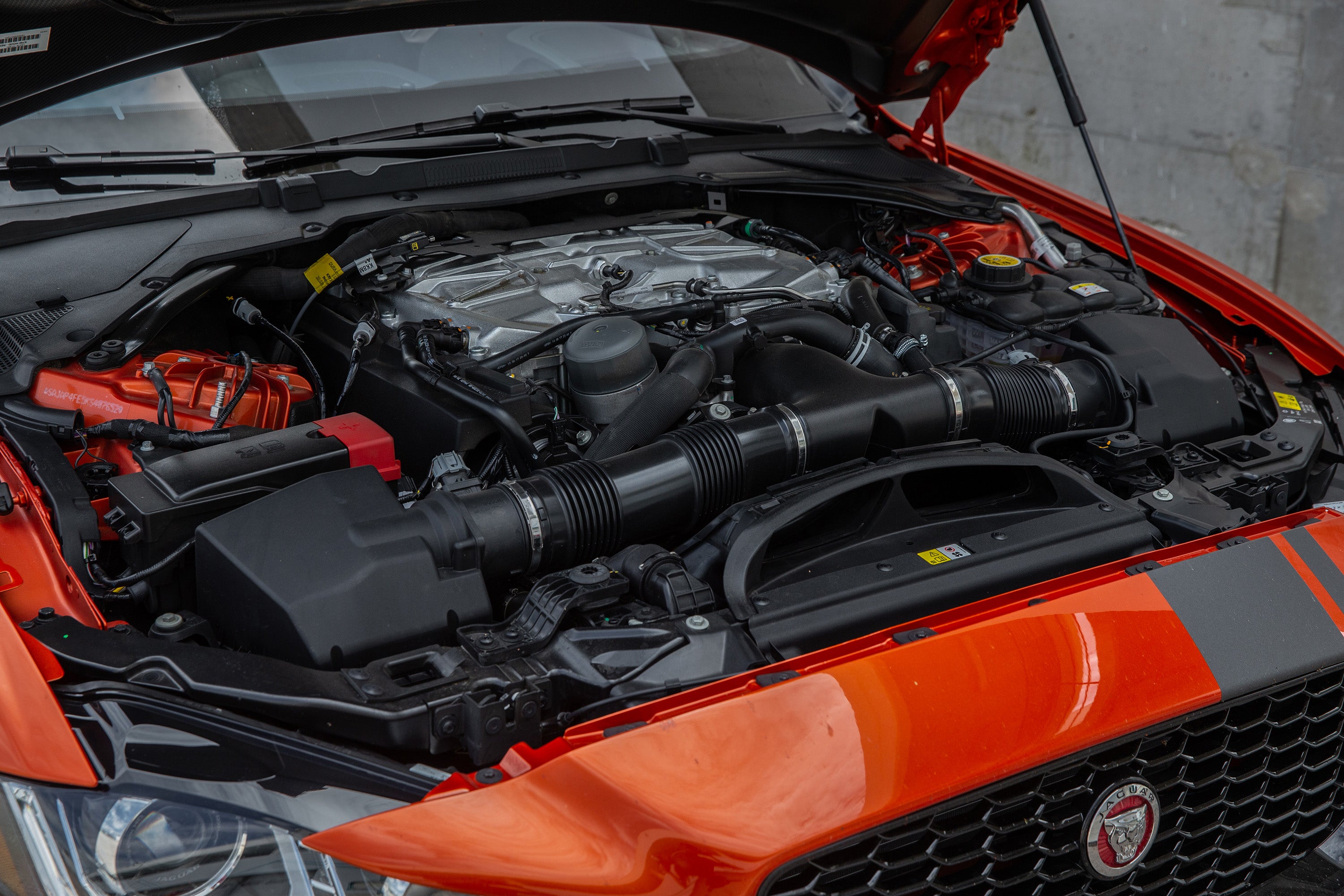 It’s an exotic pile of aluminum, magnesium and carbon fiber powered by a 592-horsepower supercharged V-8, returning 3.3-second 0-60 mile-per-hour times on the way to 200 miles per hour, making it the most powerful street Jaguar ever built. Lapping Germany’s Nurburgring racetrack in 7 minutes, 21.23 seconds, the XE SV Project 8 broke the record set by the 505-horsepower Alfa Romeo Giulia Quadrifoglio by more than 10 seconds.

But the development team at Jaguar Special Vehicle Operations did more than stuff a big engine in the XE’s bonnet and smack some kit on the body. Unlike most high performance production sedans, the all-wheel drive XE SV Project 8 can be adjusted, just like a racecar. There’s changeable ride height, camber, front splitter and rear wing. In the name of good aerodynamics, the underbody is flat, while the differential oil cooler ensures durability when it’s time to play. The P8’s extensive modifications are tailor-made in the best Jermyn Street tradition but are too extensive to list. The ones you might expect are here, such as carbon ceramic brakes and ceramic wheel bearings similar to those used in grand prix cars. Then there are the ones you don’t, like Michelin Pilot Sport Cup 2 road-legal track tires on forged 20-inch wheels _ a production car first. The only carryover body components from the standard XE are the roof and front door skins, both made from aluminum. The functional vented hood and flared front fenders and bumpers are made from lightweight carbon fiber.

Given those mods, SVO Director Mark Stanton’s comment that his department “set out to deliver a fast, fun and engaging car that encourages you to explore its performance,” is the understatement of the year. The V-8’s explosively linear power delivery reminds you why supercharging trumps turbocharging. This cat isn’t just fast; it stalks BMW M4s, Mercedes-AMGs and Porsche 911 GT3s for breakfast. 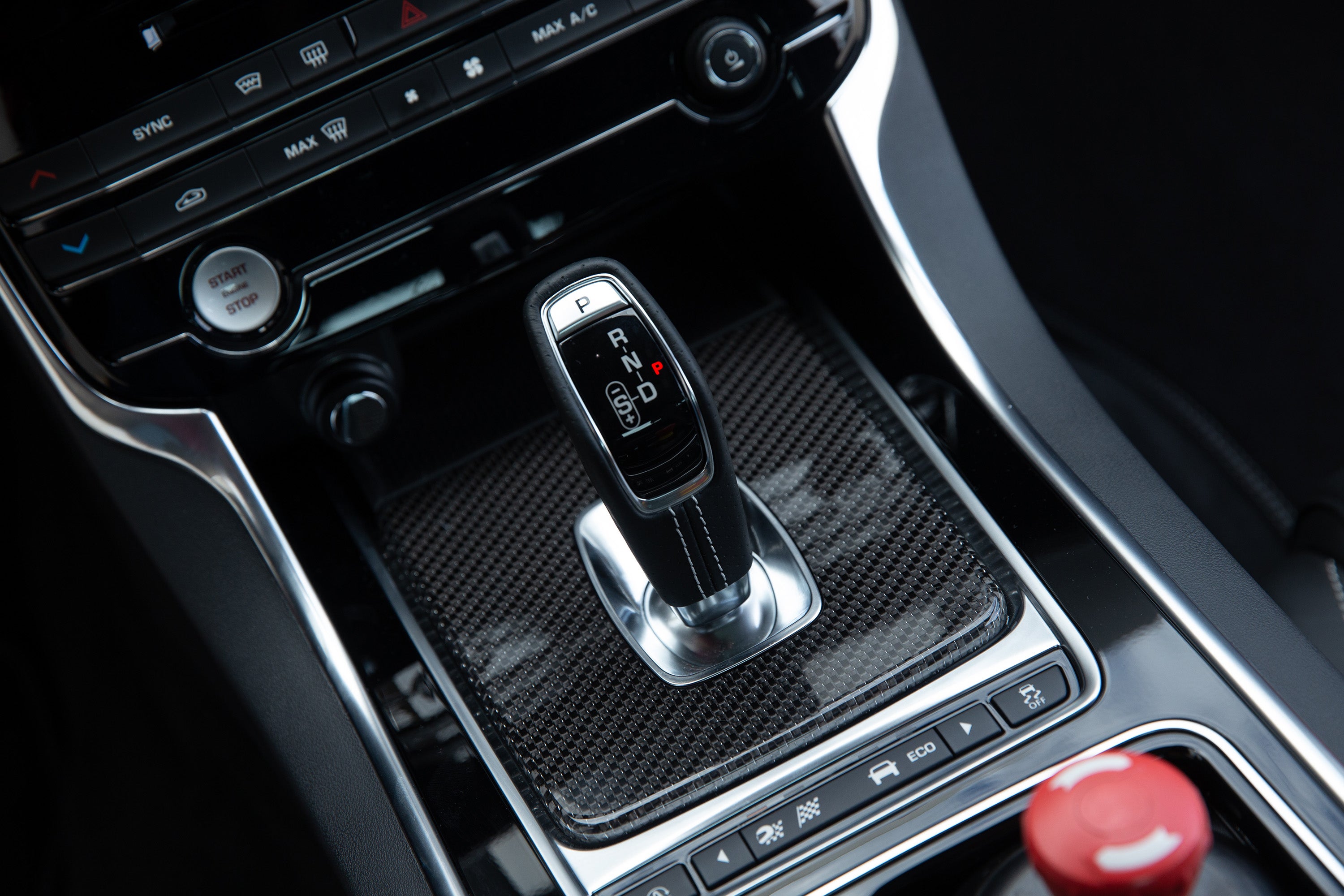 Its reflexes are finely tuned, just as you’d expect of any track car, with a primeval reaction to inputs, an animalistic aggressiveness finely tuned to deliver razor sharp reaction to any driver request. Turn-in is sharp and quick, acceleration is immediate, and braking is imposing. Even its software tuning was bred for high-speed track driving, although it feels every bit of its 3,847-pound curb weight.

But what makes it fun on the track calls for care in traffic, where most motorists are too busy eating, texting or talking to pay attention to their driving. Its manic reactions and sheer velocity is astonishing. You’ll come up on other vehicles so suddenly other drivers don’t even realize that you’re there. It’s a ferociously fast, impossibly fun feline, yet incredibly easy to drive _ at least until it rains. Then the tail can become twitchy. However, the car always telegraphs its intentions; driving feel is impeccable. And it does it all appropriately, with an ease that’s surprising.

And of course it remains totally flat in corners, with tenacious grip and a suspension that will keep you informed of how poor our highways truly are. And the front-end spoiler is low, meaning every driveway or parking lot ramp calls for a slow crawl to prevent damage. But such is the cost of speed. 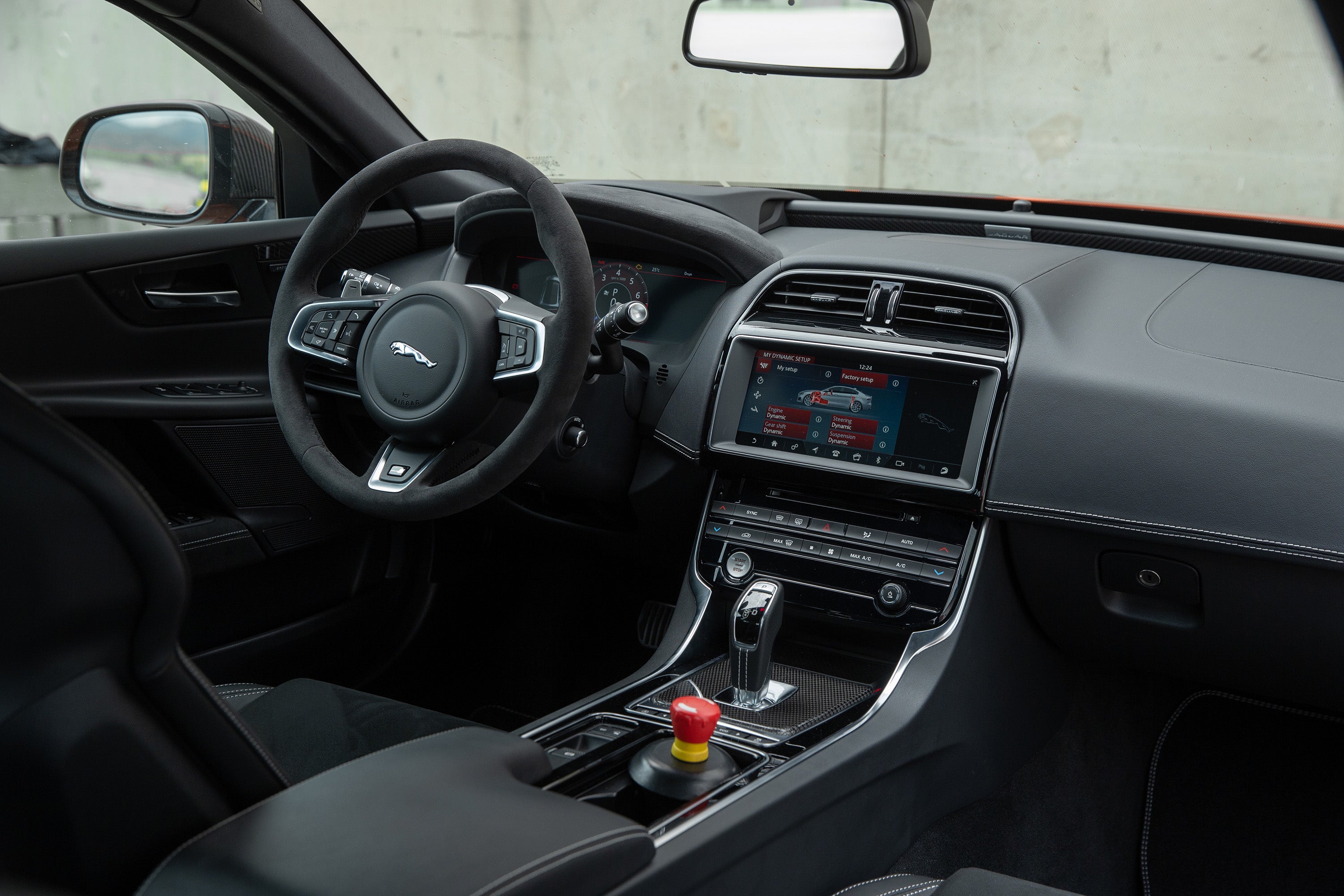 The Jaguar XE SV Project 8 includes a 4G Wi-Fi hotspot, two USB ports, Bluetooth and a 380-watt, 11 speaker Meridian Sound System with subwoofer, even if the only sound you’ll want to hear results from planting your right foot to the floor.

Aiding and abetting in the fun is the upgraded cabin, which comes with four magnesium-framed performance seats with white-stitched black leather bolsters and suede centers. Their aggressive bolstering is perfect for high-speed driving or an aggressively fun drive to the office. As you’d expect, Alcantara and carbon fiber accent the interior, while the 12.3-inch digital instrument cluster includes a track mode interface. And, yes, there are aluminum gearshift paddles mounted behind the Alcantara-wrapped steering wheel. The 10.2-inch infotainment touchscreen includes a stopwatch, g-meter readout and accelerator and braking graphics. There’s also a 4G Wi-Fi hotspot, two USB ports, Bluetooth and a 380-watt, 11 speaker Meridian Sound System with subwoofer, even if the only sound you’ll want to hear results from planting your right foot to the floor. 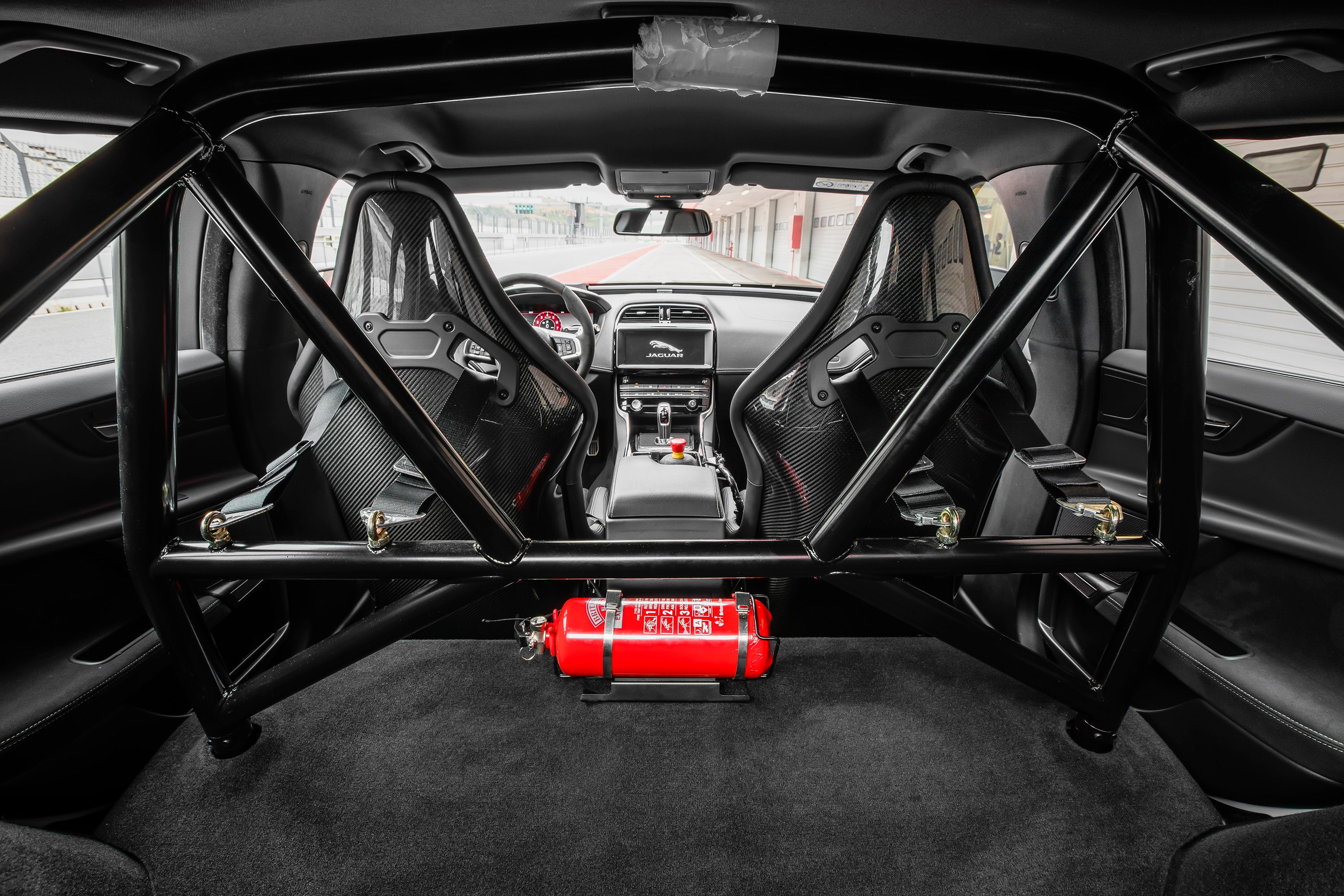 The development team at Jaguar Special Vehicle Operations did more than stuff a big engine in the XE’s bonnet and smack some kit on the body. Unlike most high performance production sedans, the all-wheel drive XE SV Project 8 can be adjusted, just like a racecar.

Of course, such goodness comes at a price. In the case of the Jaguar XE SV Project 8, it’s $187,500 _ to start. Such big numbers also bring exclusivity. A mere 300 will be hand-made by Jaguar Land Rover Special Vehicle Operations at its Technical Center in Coventry. Given that money can buy a car, but can’t provide driving skill, my guess is there will be fewer than 300 once production ends, if only due to incompetent drivers.

Then again, we can’t all be Superman or Popeye, even if we drive a car that is. Sometimes we’re merely Clark Kent with a very bodacious ride. 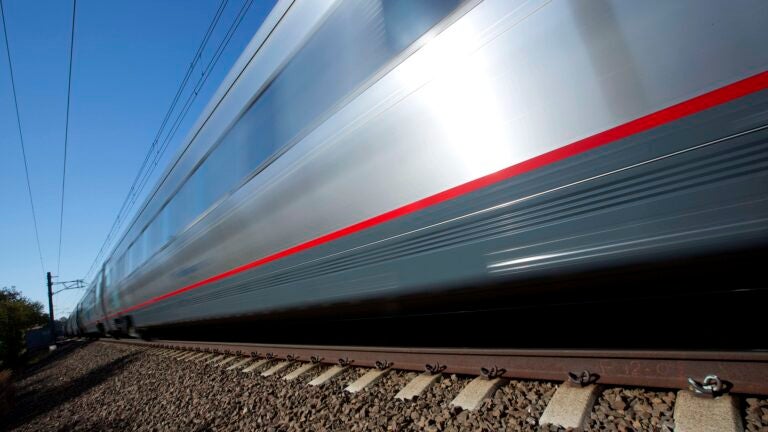