Big SUVs are booming again. Happens every time gas gets cheap. And then, when gas gets expensive again, as it started to during the past year, big SUV owners ball up their fists and stomp their feet and whine about what rising fuel costs are doing to their budget. As if this cycle weren’t predictable by now.

A benefactor of the recent cheap gas trend, the Infiniti QX80 got a refresh for 2018. But in spite of the new styling, improved interior materials, updated infotainment, and upgraded safety systems, fewer people chose this model in 2018 compared to 2017.

Given the improvements, that doesn’t make much sense, so I decided to borrow a 2019 Infiniti QX80 Limited during a family trip to my hometown of Detroit in order to see what was what.

Now that the Land Rover LR4 is dead and the latest Land Rover Discovery looks like a constipated Range Rover Sport, the QX80 takes the manly SUV mantle, delivering a blend of boxy utility, rugged good looks, and upscale elegance.

Inside, it’s just like a Nissan Armada, but nicer. This is especially true of the QX80 Limited, which includes special two-tone semi-aniline premium leather, Alcantara suede hither and thither, open pore wood trim, and other fancy stuff to justify its $91,395 starting price. It’s a cushy cabin, no doubt, but too much Nissan still bleeds through. 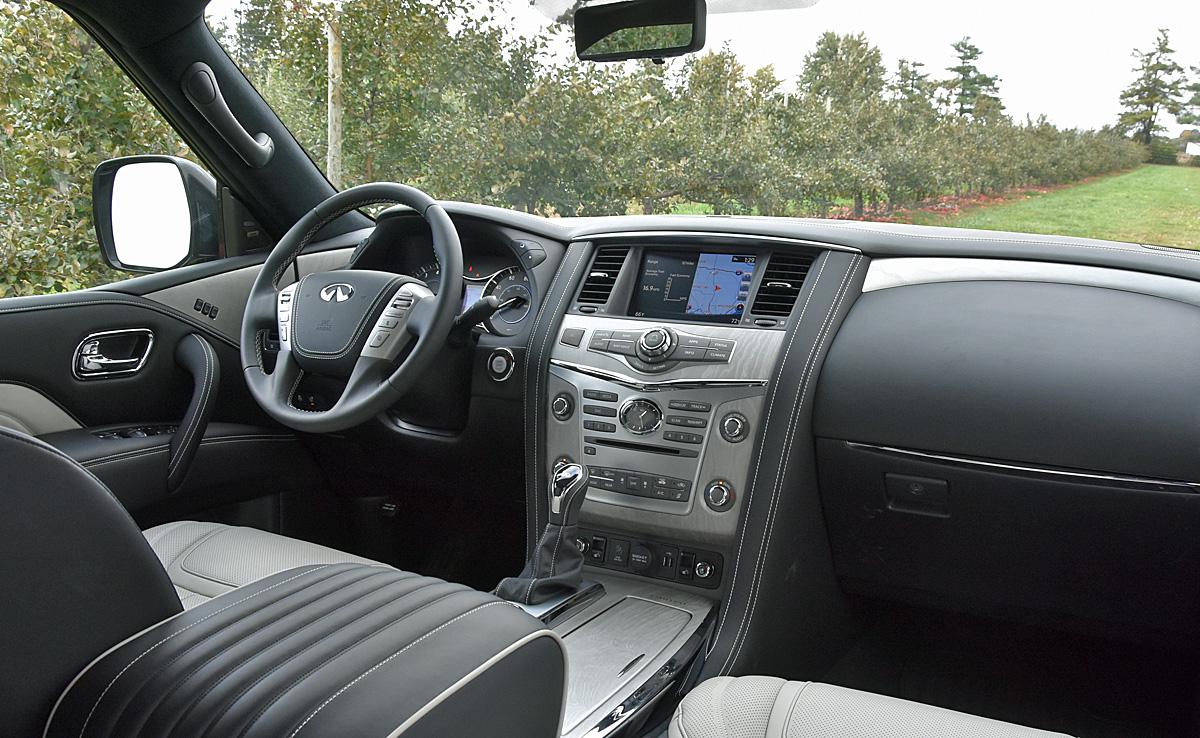 The Infiniti QX80 Limited gets a unique interior treatment to set it apart from the Luxe trim level. As is true of smaller crossovers, you can choose to carry luggage or extra passengers in the third-row seat, but you cannot do both.

Everyone clambered aboard to find spacious comfort in the remaining four seats. Captain’s chairs are standard in all QX80s, and since very little fits into the cargo area with the rearmost row in use, this gargantuan SUV is effectively a four-passenger vehicle unless you get the Luxe trim level and opt for a three-passenger bench seat.

The front seats are wide and rather flat, but supportive. Heated and ventilated cushions are standard in the Limited, operated using tiny little controls with chrome trim that, during daylight, makes it hard to tell when they’re turned off. The driving position is like sitting at the wheel of a bus, tall and high with an expansive king-of-the-road view over the curvaceous hood.

Spacious second-row captain’s chairs greet passengers, with a huge center storage console dividing them. The Limited’s standard running boards are necessary for kids so that they can climb up and into the QX80. Once they’re aboard, triple-zone climate control, dual-screen infotainment, USB ports, a 115-volt power outlet, and HDMI jacks ensure that family members are both comfortable and well entertained.

Adults won’t find the third-row seat very pleasant, which, believe it or not, is a common situation with full-size SUVs. You’ll keep it folded down most of the time, expanding the cargo area from a meager 16.6 cubic feet (not even double that of a Chevy Camaro) to a useful 49.6 cubic feet.

You can also fold the second-row captain’s chairs down, creating 95.1 cubic feet of space. However, the padded center console sticks up like a rising loaf of bread, making it easily susceptible to damage if you slide something into the SUV.

Aside from this, the navigation system required specific voice menu commands rather than increasingly common natural language commands. Even then, it sometimes did not understand me, like when I tried to input the address for Cloverleaf Pizza on Gratiot Avenue (yum!). 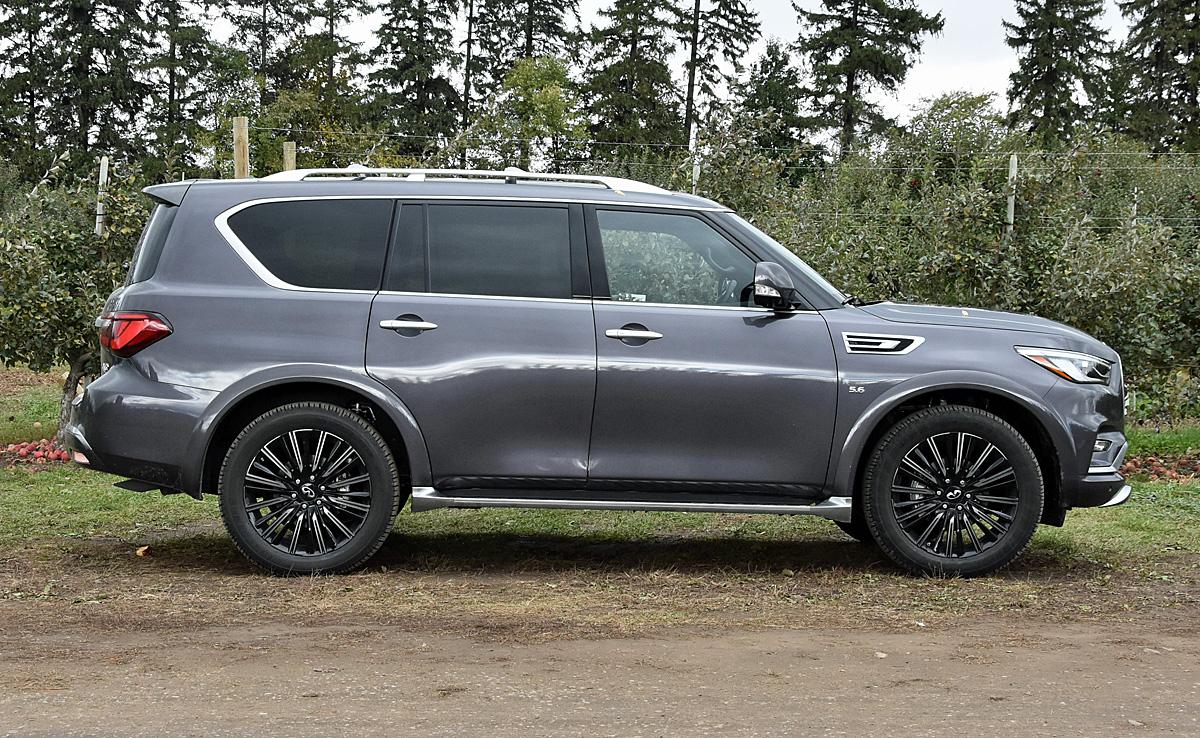 The Infiniti QX80 looks great, inside and out, but it drives like a truck. Personally, I like this characteristic, but I’d bet lots of people don’t.

Blame the QX80’s basis on the Nissan Patrol (sold in the U.S. as the Armada). Though this 5,921-pound SUV sits on a four-wheel, double-wishbone independent suspension, and features a standard hydraulic body motion control system, the vehicle on which the QX80 is based is designed to go places and do things most other vehicles can’t.

Bolting on a set of 22-inch forged aluminum wheels with 275/50 tires doesn’t help the ride quality. Neither does driving the SUV in Michigan, where the roads are often a patched and heaved mess. Slow steering requires lots of wheel work in parking lots and when making U-turns, and the QX80’s brake pedal is a little mushy.

Smooth, powerful acceleration flows from the 5.6-liter V8 engine, which makes 400 horsepower, 413 pound-feet of torque, and all the right sounds. The seven-speed automatic is flawless, featuring adaptive shift control and a couple of things you absolutely do not need in this vehicle: a manual shift mode and downshift rev matching. Together, they’ll tow 8,500 pounds, which, ultimately, is the main reason to buy a QX80 over a QX60.

My family put about 400 miles on the QX80, driving in Detroit and its environs as well as in rural areas near Port Huron. There were no twisty roads involved, and not so much as a decent on- or off-ramp for testing this rig’s handling. Off-roading amounted to a two-track path into an apple orchard, still wet from the rain, for which we definitely did not need the Limited’s standard 4-wheel drive or its 9.2 inches of ground clearance.

Our fuel economy measured 16.7 miles per gallon at a 42.8-miles per hour average speed. With a 26-gallon tank, that translates to 434 miles of range.

To infinity, and beyond 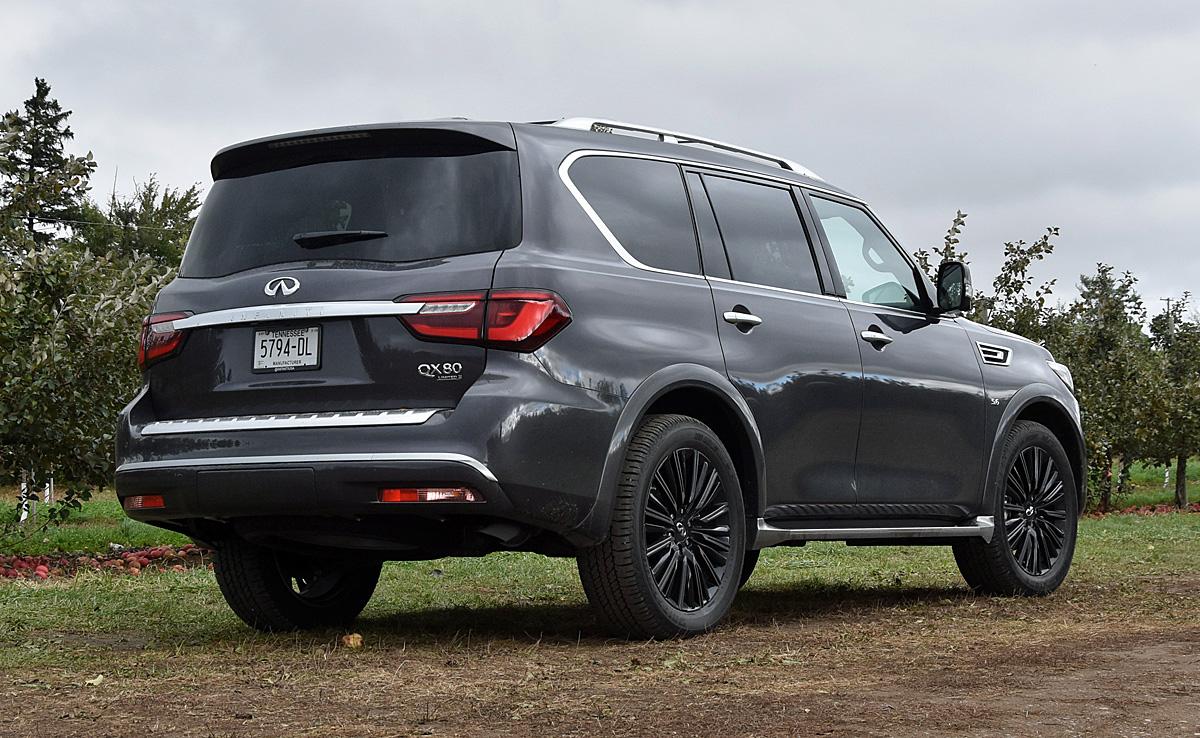 When it comes to the 2019 Infiniti QX80, perceived value is an illusion because key features cost extra and package requirements rapidly inflate the price tag.

With the QX80, Infiniti has few competitors, all of which are priced higher than this SUV’s base sticker of $66,695. That means the QX80 is a value play in a segment that is about as far away from value as you can get.

For example, as this review is written, you can lease a QX80 Luxe with 4-wheel drive for around $875 per month plus tax, with nothing down. Compare that to the best selling full-size luxury SUV, the Cadillac Escalade, at about $1,100 monthly for Luxury trim and 4WD. Keep in mind that these are the prices for leases with mileage capped at 10,000 annually, and for vehicles without any options.

When it comes to the QX80 Luxe, you pay extra for driver assistance and collision avoidance technologies, a premium sound system, upgraded materials, and other features that come standard with QX80 Limited trim. Even the second-row bench seat that is necessary to carry five people and some luggage at the same time is an extra-cost upgrade.

Worse, option requirements actually make that bench seat a $2,800 proposition, while ventilated front seats and heated rear seats require no less than nearly $8,000 of extras in order to install.

Was I saying the QX80 is a value play? Maybe I’d better re-think that.

Generally speaking, I like the QX80 for its looks, its relative rarity, its excellent powertrain, and the promise of genuine off-roading capability. But this Infiniti is aging, and fast. From the decade-old platform to the yester-tech interior, the QX80’s unrefined ride, sketchy infotainment system, lack of cargo/passenger space, and need to attend Gasoholics Anonymous meetings make it tough to recommend.

“Toy Story” character Buzz Lightyear famously exclaimed: “To infinity and beyond!” Luxury SUV buyers might do well to look beyond the Infiniti QX80.

Though honestly, aside from the redesigned Lincoln Navigator, I’m not convinced that any of the QX80’s competition is necessarily better.