Welcome to the world of reboots. This trend of resurrection is not exclusive to film and TV either as the automotive industry is notorious for doing the same thing.

The Acura NSX, Chevrolet Camaro, Dodge Challenger, Ford GT, Jeep Cherokee, Mini Cooper, Nissan Z, and Volkswagen Beetle all disappeared for a bit, came back, and are still on sale. Well, maybe not the Beetle, which Volkswagen recently announced will have 2019 “Final Edition” farewell models before disappearing forever. Again.

But leave it to Jeep to tease us with Grand Wagoneer hype but unveil the Gladiator. Yup, they’ve brought the truck back.

Designed to fit in 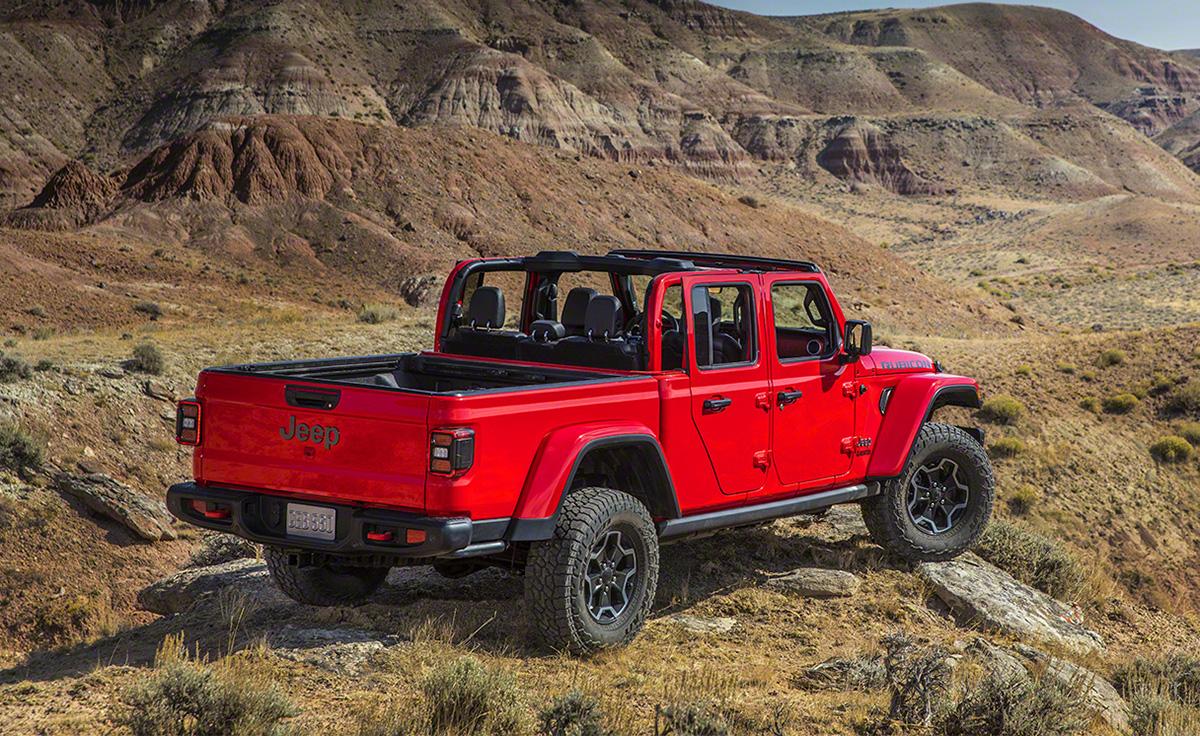 The Gladiator nameplate first appeared as a 1963 body-on-frame truck.

The Jeep Gladiator was a body-on-frame truck introduced as a 1963 model. In 1971, “Gladiator” was dropped and the vehicle was just called the Jeep pickup or J-series before it was discontinued in 1988. New parent company, Chrysler, felt the model was outdated (it was built on the same platform its entire production life) and also too close of a competitor to its Ram trucks lineup.

I guess they don’t feel that way anymore, especially when it’s suggested the Gladiator is a “customer-driven” model. But maybe the increasing market share of trucks and SUVs, which have higher profit margins than small cars, might have had an influence as well. Hmm?

Not that we have been devoid of Jeep truck concepts, the most recent being the Crew Chief 715, which was revealed during the 2016 Easter Jeep Safari, an annual off-road celebration held in Moab, Utah. Thankfully, the military-inspired concept and the civilian-oriented production model aren’t too far off in design.

To be available in four different trims (Sport, Sport S, Overland, and Rubicon), there is no mistaking the all-new Gladiator as anything but a Jeep. The distinctive angular profile, seven-slot grille, round headlamps, and square taillamps are all there as are the outdoors-ready features such as a fold-down windshield and removable doors and tops.

A premium soft top provides the segment-exclusive open-air option with partial or full-open positioning. A black three-piece hardtop also is available for all models while a body-color hardtop is reserved for Overland and Rubicon.

Furthermore, the taillamps are positioned so as to allow for unobstructed access to the bed while the power-locking tailgate can be stopped in three positions and still maintain cargo securely. Under-rail bed lighting, integrated tie-downs, an optional covered external power source, and available cargo management systems provide even more organization and versatility.

LED lighting is available only on Overland and Rubicon vehicles. Two-piece body-color fender flares are standard on Overland models and available on Rubicon as well. All Gladiator pickups do receive body-welded, body-color sport bars with integrated front occupant grab handles.

A 17-inch off-road wheels and tire set is available while Rubicon models receive 33-inch treads as standard. A full-size spare tire and mount is located under the bed and capable of holding up to a 35-inch tire without requiring a lift kit.

Engineered to go out 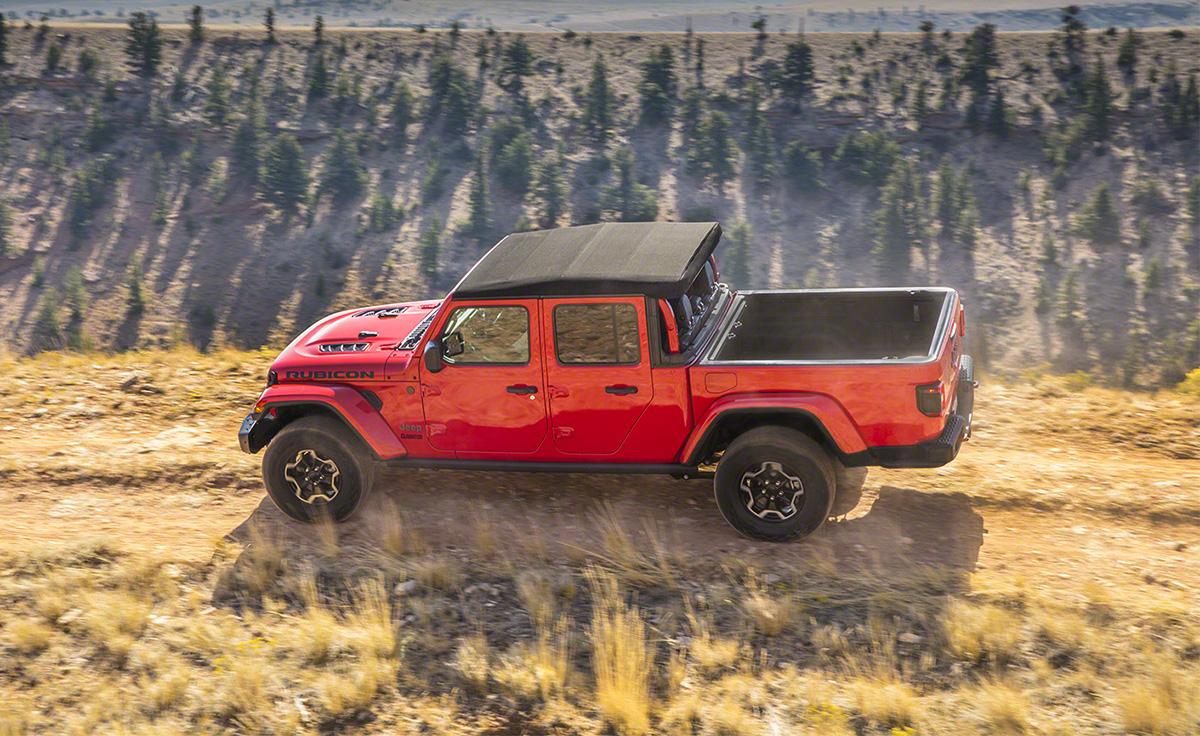 For the record, the Gladiator is not just a Wrangler with a truck bed. Jeep corporate pointedly stressed this during a pre-Thanksgiving sneak peek. According to the automaker, the only truly interchangeable parts are the doors and hood.

Also, compared to a four-door Wrangler, the Gladiator has a 19.4-inch longer wheelbase (137.8 inches) and adds 31 inches in overall length (219.4 inches). While shorter than a full-size Ram 1500 crew cab with a five-foot box, which measures at 232.9 inches in length, the Gladiator easily surpasses the crew cab versions of midsize pickups the Ford Ranger (210.8 inches) and Toyota Tacoma (212.3 inches).

At launch, power will come in the form of a 3.6-liter V6 engine with engine stop-start which will deliver 285 horsepower and 260 pound-feet of torque. A six-speed manual will be standard on all Gladiator models with an eight-speed automatic as an optional transmission.

In 2020, a 3.0-liter EcoDiesel V6 engine will be available and is rated at 260 horsepower and 442 pound-feet of torque. Along with the standard ESS, the eight-speed automatic will be the only transmission pairing.

Estimated fuel economy is not yet available for either engine or transmission pairing.

Off-road capability comes courtesy of two 4×4 systems: Command-Trac (standard on Sport and Overland) and Rock-Trac (Rubicon). The Command-Trac 4×4 system features a two-speed transfer case with a 2.72:1 low-range gear ratio and heavy-duty front and rear axles with a 3.73 rear axle ratio. The Rock-Trac system features the same front and rear axles but adds a 4LO ratio of 4:1. Both 4×4 systems offer full-time torque management.

Other impressive numbers include an approach angle of 43.6 degrees, departure angle of 26 degrees, ground clearance of 11.1 inches, up to 30 inches of water fording, a 7,650-pound maximum towing capacity, and up to 1,600 pounds of payload. 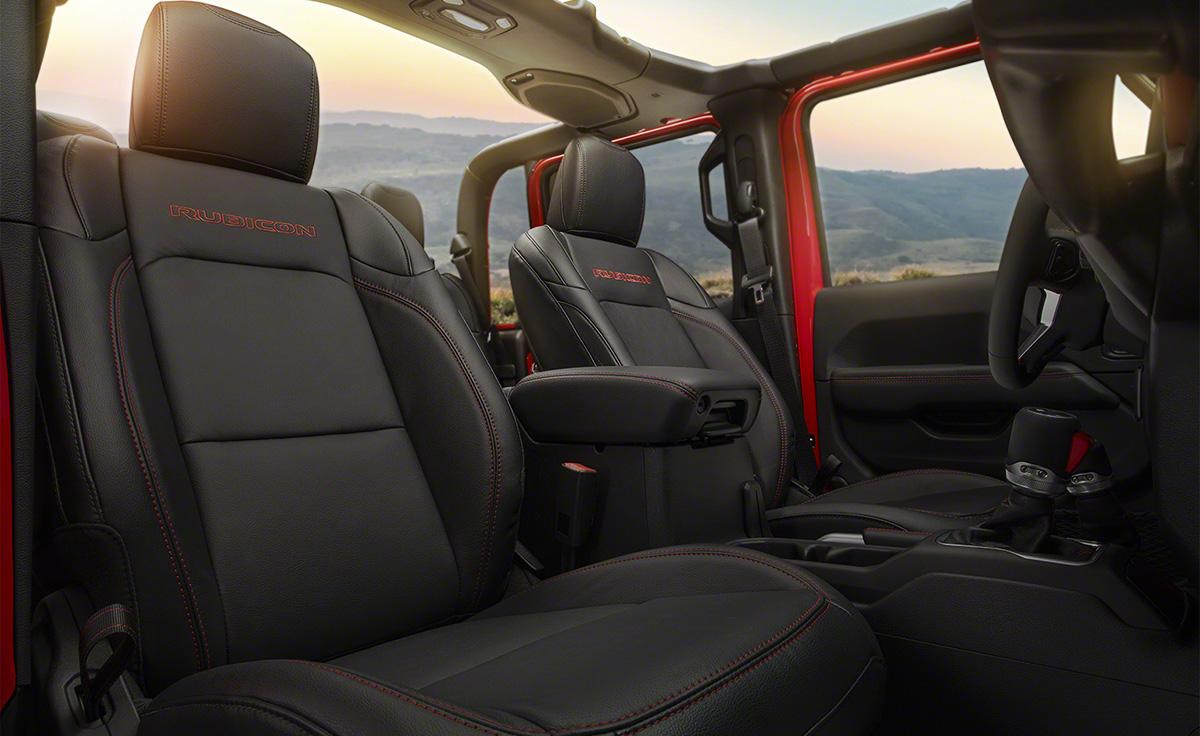 Customizing the new 2020 Gladiator is easy thanks to more than 200 new or redesigned parts offered by Mopar.

Adventuring doesn’t mean throwing caution to the wind, however, as the all-new Gladiator will offer more than 80 available safety and security features, which include blind-spot monitoring, rear cross traffic alert, a forward-facing camera, a backup camera with dynamic guidelines, and adaptive cruise control.

Infotainment also will be available via three Uconnect systems with driver information relayed through a full-color LED instrument cluster. The available seven-inch and eight-inch-with-navigation systems will also include smartphone compatibility.

Additionally, the Mopar brand will offer more than 200 new or redesigned parts and accessories for owners to further customize their new pickups.

The 2020 Jeep Gladiator is manufactured in Toledo, Ohio, where Jeep vehicles have been assembled since 1941. 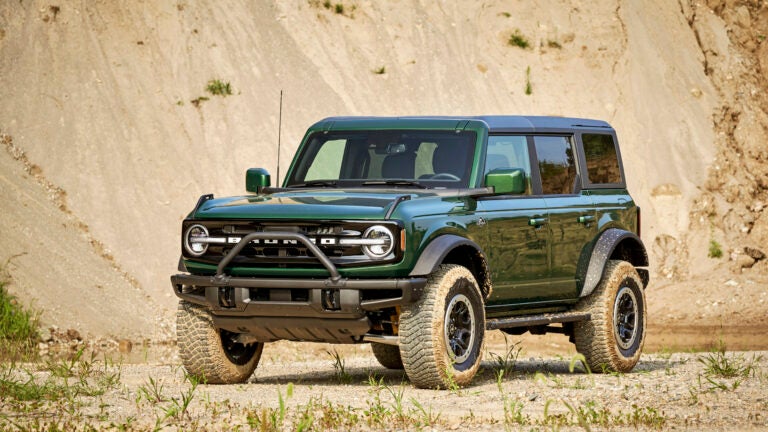