As a grandmaster in the world of best-sellers, the Toyota Corolla is a nameplate famous for its commuting dependability, if also infamous for its lack of exciting performance. But 43 million global sales (and counting) can’t be wrong, and people still need to get from points A through Z.

An all-new 12th generation was unveiled last year with the 2019 Corolla Hatchback, which itself was a revival of sorts as a five-door version of the compact car last appeared on American shores in 2013 as the Matrix. On sale this past summer, the redesigned Corolla was available only as a hatchback. But for 2020, we welcome back a familiar friend: the sedan. And this time with even more commuting power than ever. 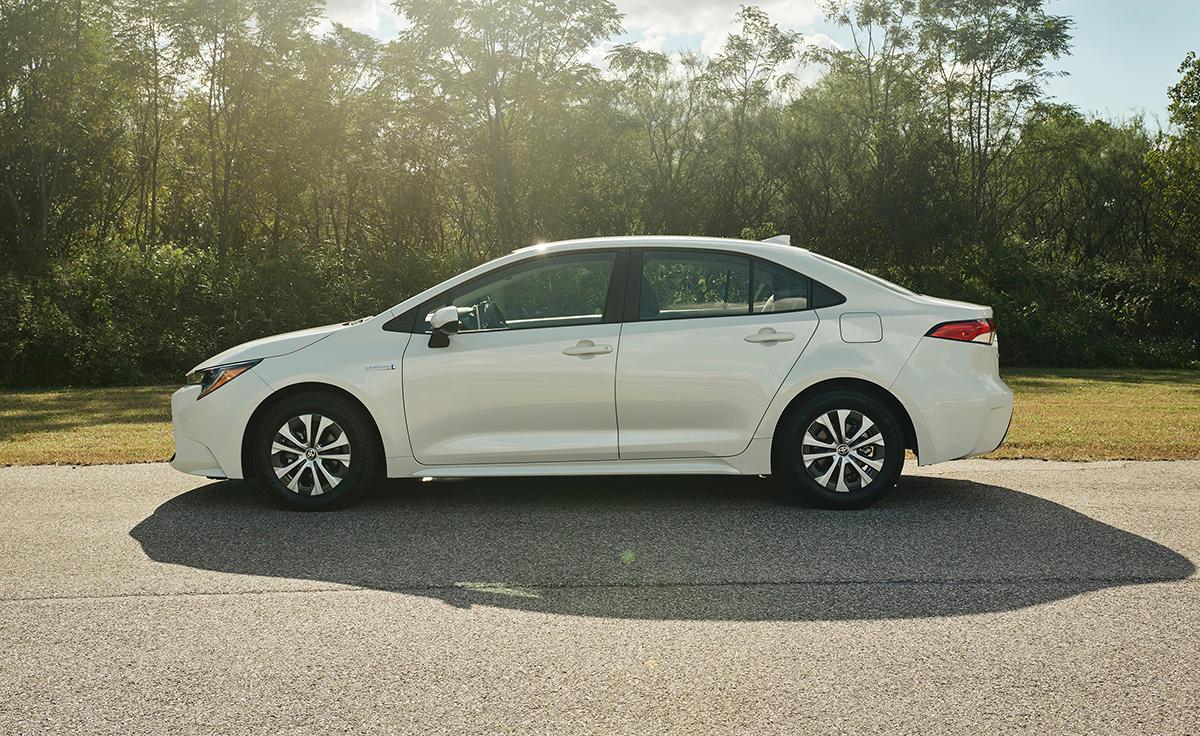 With its 121-horsepower hybrid system, the 2020 Corolla Hybrid is expected to deliver at least 50 mpg in combined driving.

The 2020 Corolla Hybrid is the first-ever hybrid version of the model to be sold in the U.S. Other markets, starting with Japan, have been enjoying the extra fuel economy since 2013. However, although the hybrid’s existence might be a global old hat, the 2020 model offers up some new tech.

Projected to achieve at least 50 combined miles per gallon, the Corolla Hybrid utilizes the latest Toyota Hybrid Synergy Drive technology from the new-generation Prius. The drivetrain consists of a 1.8-liter four-cylinder engine paired with two motor/generators that are mated to a continuously variable transmission. The total system output is 121 horsepower.

By comparison, the 2.0-liter inline-4 that powers the gasoline model offers 168 horsepower and 151 pound-feet of torque. Those vehicles can be had with either a CVT or six-speed manual with a combined mpg varying between 31 and 36 based on transmission and trim packages.

Adding further efficiency to the new Corolla Hybrid is the electronically controlled brake system. The ECB functions between the regenerative braking of the engine motors and the hydraulic braking system of the vehicle to actively recover electrical energy for increased fuel economy while also improving pedal feel and response for the driver.

Featuring an EV mode, the Corolla Hybrid also can be operated as a pure electric vehicle. Note that a vehicle proximity notification feature activates to alert nearby pedestrians of its otherwise silent battery-operated presence. But as with any electric vehicle your mileage will vary, of course, based on certain conditions like the weather, battery charge, and Earth’s position to the sun. 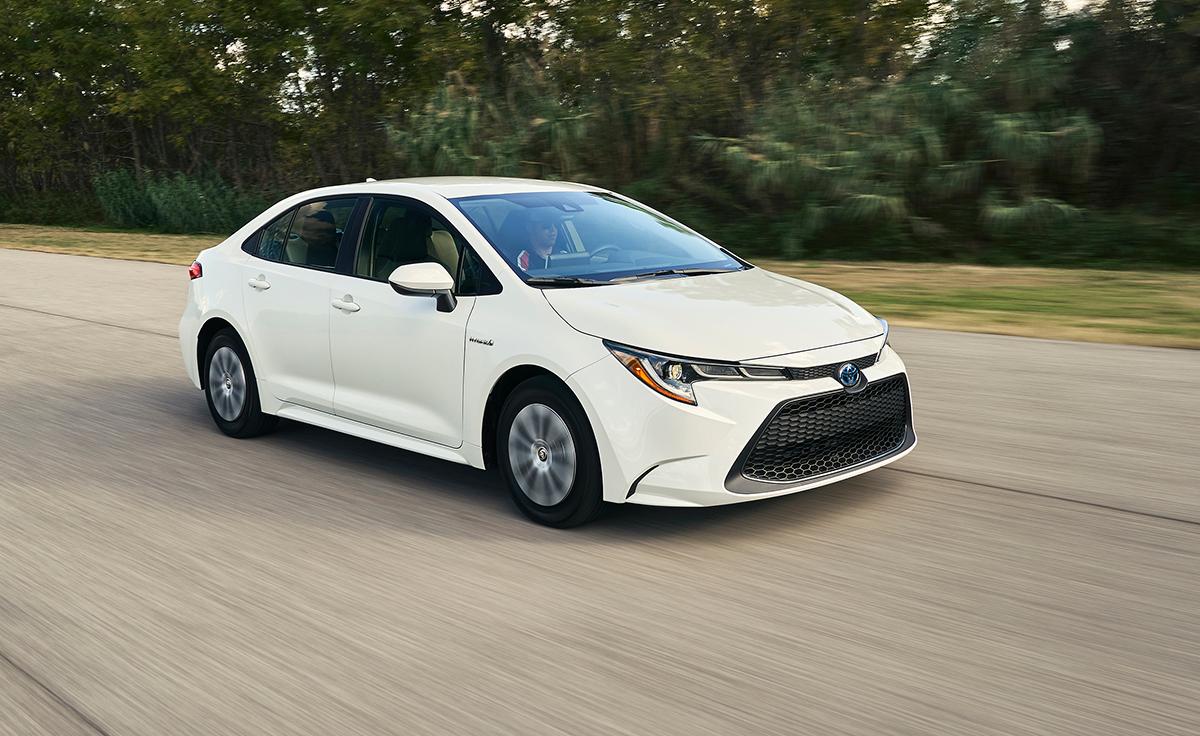 The 1.8-liter engine was designed specifically for hybrid application, with the automaker seeking further efficiencies in other aspects of the vehicle. An exhaust heat recirculation system warms up the engine coolant quicker, which allows the hybrid system to take over for the gasoline engine sooner and more often. This means better fuel economy during city driving.

Sitting on the Toyota New Global Architecture (TNGA) platform, the Corolla Hybrid is designed to be efficient without compromise. The battery pack boasts a smaller and flatter package which allows it to be positioned beneath the rear seats as opposed to taking up valuable trunk space. This battery placement allows for a 60/40-split folding rear seatback which means even more cargo capacity.

This is possible due to Hyper-Prime Nickel, a newly developed technology that is employed within the battery pack to increase battery performance while minimizing overall size. The battery’s location offers a more balanced vehicle weight distribution which, in turn, should enhance driving dynamics.

And to test out the Corolla Hybrid’s handling, drive modes include Normal, Eco, and Sport. Pretty standard fare nowadays, though, with Eco adjusting acceleration inputs for efficiency and Sport siding with increased power.

Like its gasoline sibling, the hybrid does feature a new multi-link rear suspension for improved riding comfort. Don’t look for summer sport tires, however, as the Corolla Hybrid will be equipped with low-rolling resistance tires wrapped around 15-inch aluminum alloy wheels. 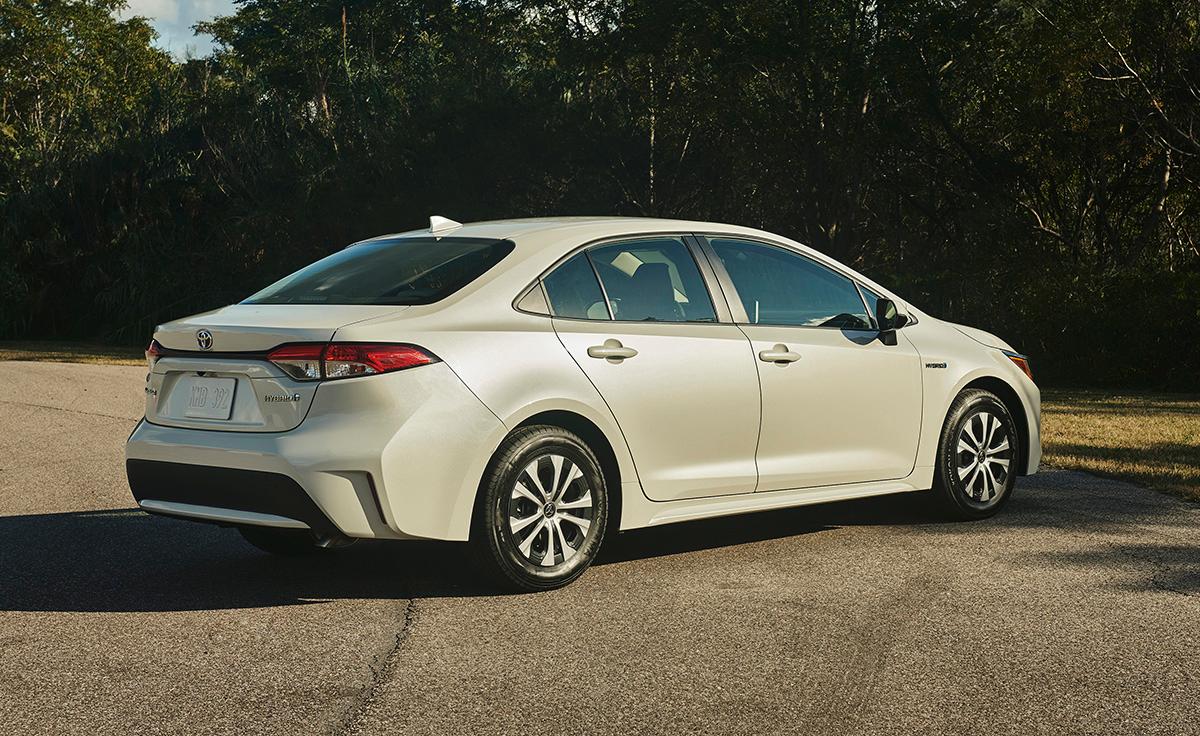 A hybrid exclusive is a seven-inch MID which shows the speedometer and real-time hybrid system details. Also, as a sort of gamification of hypermiling, an ECO accelerator guide within the MID provides coaching regarding pedal operation in order maximize fuel efficiency. But drivers can change the display to instead show the tachometer, too. You know, because Sport mode.