For 2019, the GX carries over without any major changes, but the Blind Spot Monitor with Rear Cross-Traffic Alert is now a standard feature at no extra cost.

Also, the Lexus Enform Safety Connect and Service Connect features are complimentary for 10 years, and Lexus Enform Remote, which brings smart-watch and Amazon Alexa integration, is now included on all models.

Over the past couple of years there have been some content tweaks, such as the addition of a new Sport Design Package ($1,950) for the two higher trim levels, which adds 18-inch split-five-spoke alloy wheels with gunmetal metallic finish; special front fascia and lower grille surround; side mirrors with chrome detail; a sporty rear valence; chrome exhaust tip; scarlet taillights; and heated middle row tilt/slide dual captain’s chairs.

Among other features added recently were standard LED headlights and daytime running lights, and optional LED fog lights (included on Luxury and Premium), along with a new rear fascia and taillights.

Also, dual captain’s chairs are available for the second row of seats, which will cut the vehicle’s capacity to six people; and heated and ventilated front seats are offered as a standalone option ($640) on the base model, rather than requiring a full separate upgrade package.

The Driver Attention Monitor uses a camera to scan the driver’s face, and to sound a warning if the driver stops looking forward. If the driver doesn’t respond as the vehicle closes on an obstacle detected ahead, this system gently applies the brakes, retracts the front seatbelts and prepares the brake system to respond with increased force when the brake pedal is pushed.

Our Luxury tester, though, came with the Mark Levinson Premium Audio, included in the Driver Support Package. It’s also available by itself, for $1,145. We also had the Sport Design Package.

Also included was the Dual-Screen Rear Entertainment system ($1,970). Otherwise, the Luxury model already comes with just about everything you can get on the GX.

Previously known as the GX 470, since 2010 the vehicle has been called the GX 460, reflecting a change for the second generation to a 4.6-liter V-8 engine, replacing the previous 4.7-liter. 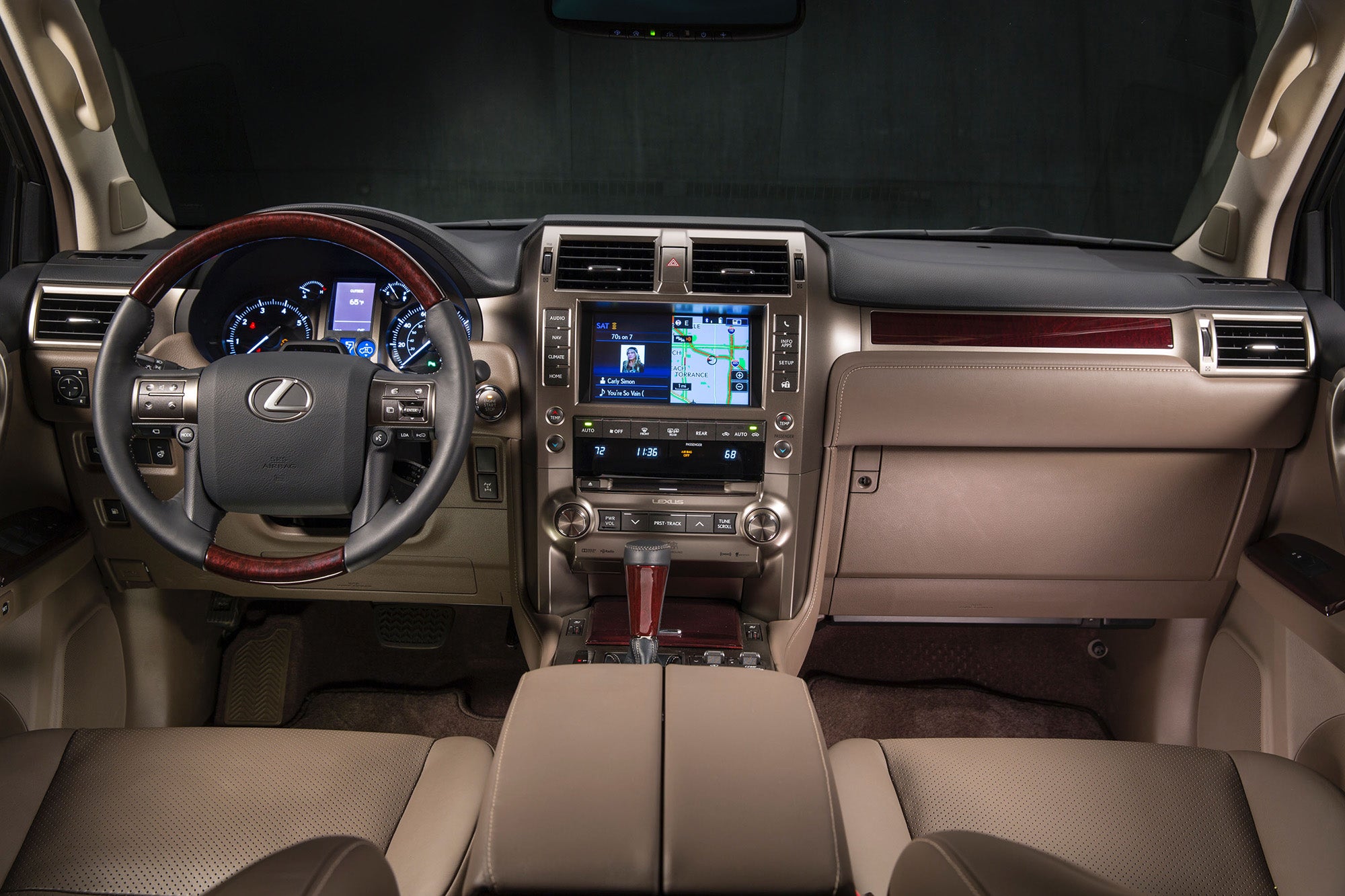 On all models of the 2019 Lexus GX 460, there’s a standard audio system with eight-inch touch-screen display, backup camera system, and HD radio with real-time traffic and weather information.

With the base GX 460, you get NuLuxe (faux leather) trim with natural grain and Linear Espresso Wood/Abyss Black trim. Headlight washers are available (standard on the Luxury model).

Both the GX and 4Runner are built on the same architecture, but on the GX, fulltime four-wheel drive is standard. And for fans of off-road driving, the system is a true four-wheel drive, with low-range gearing available through a toggle-switch-activated transfer case for serious trail driving.

Great off-road capability has always been one of the hallmarks of four-wheel-drive equipped 4Runners and the GX, and the current GX 460 also includes some of the innovative trail-driving features of the LX 570.

As unibody crossover utility vehicles take over from traditional SUVs across the industry, the GX and LX continue as body-on-frame, truck-style SUVs.

In the Lexus lineup, the GX fits between the RX 350/450h crossovers and the LX. The RX is based on the architecture of the Toyota Highlander crossover.

Under the hood of the GX is the 4.6-liter V-8 rated at 301 horsepower and 329 pound-feet of torque, connected to a six-speed automatic transmission.

There was plenty of power in our GX tester, even on mountain roads we experienced during our test week. We did not tow any trailers with the GX, but have done so with the V-6 powered 4Runner, which does quite with a trailer towing a car behind.

EPA fuel-economy ratings for the GX 460 are 15 miles per gallon city/18 highway/16 combined. During our test, we averaged about 16.3 miles per gallon with mostly highway and country-road driving.

No driver input is needed for normal driving in four-wheel drive; but the driver can lock it into four-wheel-drive high or low range as conditions warrant. There is a Torsen limited-slip center differential with electronic lock.

With the standard bench seat, the GX has room for three passengers in the middle row; the third row can accommodate two small people (think kids). The second-row bench can be moved up to 4.1 inches forward or backward to allow for longer or shorter legs in either row, or to maximize cargo space behind the second seat (with the third seat folded).

The 60/40 split second-row seat can be folded, as well, to increase cargo space, and it also can recline. The third seat has a standard power folding feature to increase cargo capacity with the seat isn’t needed for passengers _ otherwise, space is quite limited behind the third row — under 10 cubic feet.

On the GX, the tailgate opens to the right side in one piece, or the glass can be flipped up separately with the rest of the tailgate still in place.

The GX is very quiet at highway speeds, allowing passengers to enjoy the entertainment system or conduct conversations in normal voices.

Standard on our vehicle were an electronically adjustable suspension with three modes _ normal, sport and comfort. Crawl Control, included in the Driver Support Package, is designed for slow off-road driving over rugged terrain. It automatically modulates the throttle and brake, allowing the driver to concentrate on steering, and can help free the vehicle from sand, mud or snow.

Highlights: The second generation of the Lexus truck-based midsize sport utility vehicle arrived for 2010, and it since has received some design tweaks and upgrades, including a new Lexus signature spindle grille. This vehicle offers truck ruggedness and reliability in a package that combines great off-road capability with good on-road ride and handling.

Negatives: Third seat is not roomy enough for full-size adults

Side air bags: Front seat-mounted; side-curtain for all three rows.

Visit How good are the Astros? 4 things to watch as Red Sox prepare for ALCS