Ford Mustang and Focus RS had a baby. Hello, wunderkind.

Actually his name is Mustang Ecoboost High Performance Package, but let’s just call it the HiPo. We all know great athletes by their nicknames anyway. MJ. Gronk. V-Mart.

The HiPo is a prodigy that bears the DNA of its parents — a hot-hatch hellion crossed with an elegant rear-wheel drive pony car. Rotating the RS’ eager turbo-four longitudinally and stuffing it into the Mustang’s forward bay, HiPo has a natural 50/50 weight balance, throaty voice and $35,000 price tag.

That affordability is the car’s secret sauce. It offers hours of fun for sports car owners who can only dream about owning its V-8 powered, $60,000-plus big brothers GT350 and GT500.

Where the GT350 and GT500 really have to be taken to a race track to explore their limits, you can explore 80 percent of the HiPo’s bandwidth through Hell, Michigan’s twisties, Harbor Springs’ Tunnel of Trees or a parking lot’s autocross cones.

I got my first dose on the spaghetti curves of California Route 1 north of San Francisco. I was an instant addict.

BRAAAAAP! The bratty Mustang was off like a shot, its weighted steering rooted to the asphalt. Turn the wheel, and the nimble chassis followed like ink from a pen nib, pulling over an impressive 1G of cornering loads. Readers of this column know I am a disciple of the sixth-gen Camaro, the best-handling pony car devised thanks to Chevy stealing its chassis from the Cadillac ATS, the best-handling compact luxury sedan devised.

Mate the Camaro’s athletic bod to the 335-horse V-6 1LE Track Package and the Chevy is more fun than a free weekend pass to Cedar Point. No Mustang or Challenger or Charger could touch it. Until now.

Somehow, the elves in Ford Performance’s toy shop have conjured a Mustang to match the 1LE.

Credit chassis tricks like thicker sway bars, 10 percent-stiffer springs and engine-bay cross-braces that strap the pony flat to the road. And there is the famous 2.3-liter, 330-horse turbo engine, rescued from the RS before the pocket rocket left our shores for good.

Motorheads everywhere shed a tear that day as the top-trim RS followed the Focus line back to Europe. But its heart beats on in the Mustang and its is a worthy competitor to Camaro’s V-6 and sharp 6-speed manual box. More than worthy.

With optional 10-speed transmission, the HiPo will stomp a Camaro 1LE V-6 out of a stoplight by over half-a-second, 4.5 seconds to 5.1. I told you this kid was a prodigy.

WRAUUUGGH! I waved a big-boy Mustang GT350 by me on Route 1 and attached myself to his bumper like a sucker fish on an orca. We danced through the curves, the GT350 eventually leaving me behind with its prodigious 526-horse V-8 power. Nice to have four more cylinders. But drive a GT350 like that too long and it’ll turn your hair white. Not to mention wake every cop within a 50-mile radius.

Without the heavy V-8 up front, HiPo can be driven hard without scaring the lunch out of you. Or the dollars out of your wallet.

Yes, the 10-speed transmission is a treat. But for $1,500 less, the six-speed manual box is plenty engaging. It actually ups the visceral thrills since the engine is tuned for a higher rev range than the RS, so you can really row the gearbox. That, and there’s more SNAP CRACKLE POP when you lift off the throttle into a tight bend. Who says manual transmissions are dead?

HiPo also comes with a handling package that engineers refer to as the High Performance Hi — {-inch wider sticky tires, bigger sway bars, limited-slip differential, magneride shocks — which seems kinda redundant on a special-edition Mustang already outfitted with $4,995 in handling and engine upgrades. It is.

Unless you’re a track-day regular, the standard HiPo is plenty of car. There, just saved you another $1,995.

Ford also offers a convertible version of the HiPo for an extra $5,500 so you can hear the RS engine topless, but chopping the top reduces chassis stiffness by 25 percent. So stick with the coupe, it’s gorgeous anyway in Grabber Green or Twister Orange (which won’t cost you a thing, either).

All you’ll need to add is leather seats.

GROAAAAAN! That’s the sound you’ll make after emerging from the standard cloth Mustang HiPo seats after a couple of hours of destroying country roads. I’ve found Mustang cloth to be hard on the back, so do yourself a favor and get the leather package — because once behind the wheel you won’t want to get out.

Bottom line, after adding the HiPo package to the base $27,765 Mustang, you have one of the best sports car bargains on the planet for $34,960: Apple CarPlay and Android Auto standard. Nice touchscreen. Digital instrument display. Good visibility and actual rear seat legroom (though giraffe necks like your 6-foot-5 reviewer will struggle under the fastback roof).

The rear seat may deter Focus RS buyers who have followed their favorite engine to the HiPo. Squared-off hot hatches, after all, offer unique utility with their excellent rear cargo and head room.

But they will find a bargain in the HiPo, which is a cool $7,000 cheaper than the dearly departed $42,000 Focus RS and its manual-only gearbox. Focus fans will like the HiPo’s abundance of Skittle flavors, too — like the aforementioned green and orange, or Race Red, Kona Blue or Orange Fury.

This being one of nine Mustang trims, HiPo can be easily distinguished by its mesh grille, multi-colored rear pony badge and black hood stripes (which I would call whiskers, but this is a pony).

I’ve balked at the government emissions-forced trend toward turbo-4-powered performance cars, including the wispy standard four-banger in the $26,000 Mustang. The RS engine is not that four. Heck, this RS-derived engine has more output than the Mustang GT just a decade ago, and a personality to match. Bury the throttle through a tunnel — say, under Cobo after a long day at work — and hear the active exhaust erupt, gurgle and bang through the big quad exhaust pipes.

Papa Mustang and Mama RS would be proud of their little hellion. Just call him HiPo. 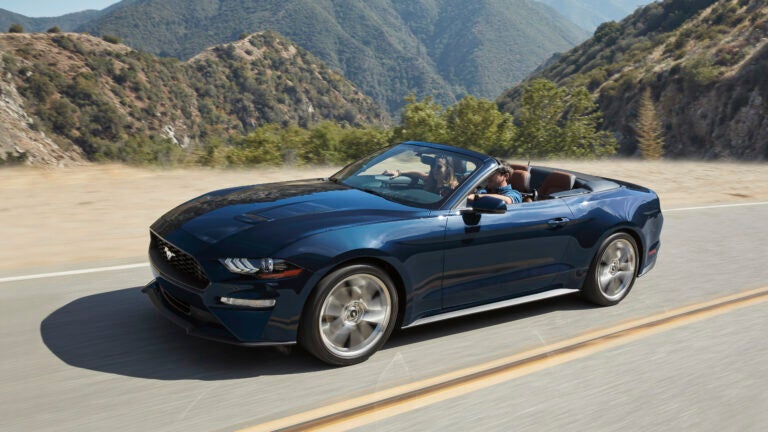 Edmunds picks the top convertibles for 2021