After getting an all-new hatchback version for 2019, the Toyota Corolla debuts a redesigned sedan lineup for 2020, including the brand’s first hybrid model.

The 12th-generation Corolla sedan carries forward much of the new exterior styling that made its debut earlier on the hatchback version.

For the new sedan, prices start at $19,600 (plus $955 freight) for the base L model with a continuously variable automatic transmission, and range as high as $25,550 for the top-of-the-line XSE model with the CVT, which we tested for this report.

On gasoline-only versions, there are two engines available, depending on trim level. L, LE and XLE models come with the 1.8-liter four-cylinder from the previous model, now producing 139 horsepower and 126 pound-feet of torque.

SE and XSE models get an upgrade to a new 2.0-liter four-cylinder engine with 169 horsepower and 151 pound-feet of torque.

The six-speed manual gearbox is offered only on the SE (Sport Edition) model, where it is a $700 upgrade over the SE with the automatic. All models have front-wheel drive.

Toyota says the 12th-generation Corolla sedan and its hatchback variant are based on the Toyota New Global Architecture, described as “far more than a new body structure, bringing together new approaches to engineering, design, assembly, and materials.”

SE and XSE versions have sportier appearances than the other trims. They feature body-color chin spoilers and aero stabilizing fins, and Toyota says their slim, J-shaped Bi-Beam LED headlights, which wrap into the fenders, are meant to give the car a “steely stare and a distinct nighttime signature.” The SE and XSE also have triple J-shaped LED clearance lights, as well as LED turn signals.

Available is the Adaptive Front-lighting System ($450, included on our tester), which turns the low beams slightly in the direction the car is turning, based on steering angle and speed. All models have some LED lights, and SE/XSE versions have smoked outer light lenses.

Also a cool feature on our XSE were the 18-inch multi-spoke alloy wheels, which are included on SE models as well. The other trims get 16-inch wheels, except for the hybrid, which has 15-inch.

All but the base model come with a high-resolution eight-inch multimedia touch screen rising from the center dash. L models have a seven-inch touch screen. The instrument panel, cowl, hood and dash belt line have been lowered for increased forward visibility.

The cabin has a mix of high-gloss and matte surfaces, including silver accents with piano black and optional contrasting stitching, giving the interior a more-upscale appearance. Ambient lighting is available for the front door trim, console tray and front cupholder.

That console tray was the perfect spot for my phone. It also houses the optional wireless phone-charging pad. The cupholders in the center console are terraced to accommodate different beverage containers.

A standard 4.2-inch Multi-Information Display is between the tachometer and speedometer, and a seven-inch display is available (standard on our XSE model). The bigger screen allows for switching between analog and digital speedometers.

SE and XSE have a new front-seat design with the headrest nestling into the shoulder area. LE and XLE have a new U-shaped front seatback. Toyota says these new seat designs create “a sense of youthful, sporty appeal while improving comfort.”

The CVT on our XSE had paddle shifters to simulate a 10-speed sequential-shift transmission, and included a Sport Mode.

Our 2.0-liter engine had Dual VVT-i (Variable Valve Timing-intelligence), with VVT-iE (Variable Valve Timing-intelligence by Electric motor) on the intake side and VVT-i on the exhaust. VVT-iE uses an electric motor instead of oil pressure to control the valve timing, enhancing power output and fuel mileage, and reducing harmful emissions, the automaker says.

We had plenty of power in our tester, and the CVT seemed to shift more like a conventional transmission even without using the paddle shifters.

Among standard features across the board are Toyota’s Entune 3.0 connectivity system with Apple Car Play and Amazon Alexa connectivity; a sport-tuned suspension and new underpinnings based on the Toyota New Global Architecture. Surprisingly, though, the audio system does not support Android Auto, which supports Android smartphones, the most-popular phones on the market worldwide.

Standard is the second generation of the Toyota Safety Sense system, with new active-safety technologies. They include Pre-Collision System with Pedestrian Detection day or night (night is new), or daytime bicyclist (new), It alerts the driver (audible and visual warnings). It can apply the brakes to help mitigate or avoid a collision, using Forward Collision Warning, Brake Assist, and Automatic Emergency Braking. Dynamic Radar Cruise Control was standard on our XSE model.

Also included are Lane Departure Alert with Steering Assist; automatic high beams; and Lane Tracing Assist. The new Road Sign Assist can identify Stop, Yield, Do Not Enter and Speed Limit signs and display visual and audible alerts. Alerts vary based on the sign type, and are displayed on the Multi-Information Display screen, Toyota says.

Blind-spot monitoring is standard on the XSE. All models have a backup camera with guidelines.

While there is room for up to five people, the rear bench seat is more comfortable for two rather than three, and our rear passengers said they had adequate knee, leg and head room. A middle armrest with two cupholders can be pulled down for the outboard passengers when no one is sitting in the center position.

Total sticker price was $29,214, including freight and options, which brought us a well-equipped vehicle that was fun to drive along with being quite practical.

The automotive columns of G. Chambers Williams III have appeared regularly in the Star-Telegram since 1994. Contact him at [email protected] or on Twitter @gchambers3.

Highlights: Toyota has rolled out its redesigned Corolla sedan for 2020, with new styling inside and out, along with more safety technology. This is a roomy and comfortable vehicle that seems more like a small luxury car than the affordable compact it is.

Negatives: Rear middle seat is tight for adults or teens. 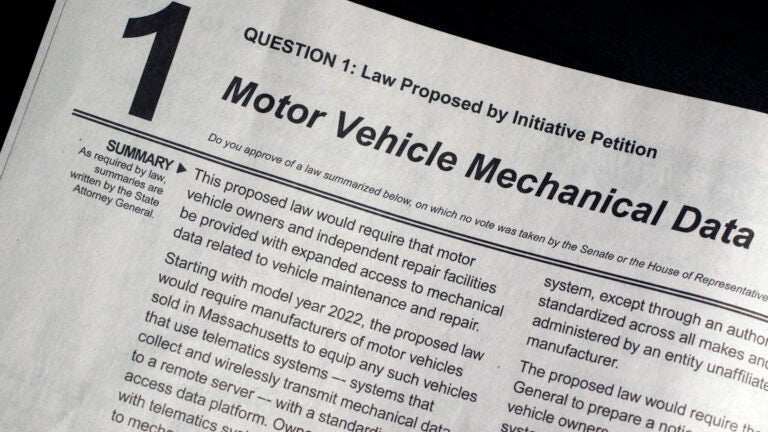 Making sense of Question 1, the return of the Massachusetts right-to-repair debate