The C-Class from Mercedes-Benz used to be a low priority on my list for luxury compact cars. The BMW 3 Series was just a tough car to beat, the Audi A4 offered better styling, and the C-Class wasn’t significantly refreshed since its introduction in 2007.

Then the 2015 C300 AMG 4MATIC arrived in the driveway. After a week behind the wheel covering a few hundred miles, mostly highway, I’m a convert. This four-door sedan has leapt to the front of the class.

The C-Class is all new for 2015. Befitting us chunkier Americans, the wheelbase has been increased 3 inches to 112 and it’s 1.6 inches wider. Also, the C-Class trunk capacity has swelled to 12.8 cubic feet to swallow all of our groceries.

A few weeks prior to driving the C300 I spent time with the Mercedes-Benz S500. I found the cabin of the small car comparable in quietness to the much larger and more expensive full-size sedan. In fact, it was almost too quiet when a tire suddenly went flat on me.

How to say this? I didn’t notice a problem for more than 50 miles. Sure, the tire pressure monitoring system instantly flashed 0 for the right rear tire. Not hearing the classic “thunk, thunk, thunk’’ of a flat, I kept driving and thought the tire sensor had failed.

Fortunately, I was close to home when I finally felt the tire acting strange. A quick gas station stop oddly showed no damage but the owner’s manual revealed I was rolling on run-flats. Hallelujah. They got me home and the car was off to the dealer the next day for tire service.

There’s an AMG in the name but it’s not from any boost in power. Instead, the C300 earns its AMG stripes with a sport package featuring AMG body styling, 18-inch AMG-wheels, and sports suspension. Click on the sports + suspension feature and you have yourself a little pocket rocket.

Steering becomes ultra-responsive and revs never dip below 3,000 rpm from the seven-speed automatic. Sure, the C300 also offers comfort, and sport and eco suspensions but you’re going to want to leave things in sports + probably 90 percent of the time.

Mercedes doesn’t specify which suspension was used, but the C300 does 0-60 in 6.2 seconds. You know, there’s rarely a need to go much faster. Handling with the all-wheel- drive system was consistently responsive.

One new feature you may have heard about is the touchpad in the hand rest over the controller for the Comand Infotainment System. It’s designed so you can swipe it like you would a smartphone. Even after a week it felt more intrusive than intuitive. I found myself using the screen (or actual controls) more often than not.

Just because a car should integrate with my smartphone doesn’t mean I need it to replicate my smartphone. A car’s controls are always going to be easier to use without looking at them than a smartphone.

The 2015 Mercedes-Benz C300 has some innovative safety features in addition to the usual suspects. The standard collision prevention assist plus system can execute autonomous braking up to 124 mph if it senses danger and the driver doesn’t respond. It also brakes in response to stationary vehicles at a speed of up to 31 mph, and is able to prevent rear-end collisions at speeds of up to 25 mph.

Mercedes has tinkered hither and yon to shave 200 pounds in weight off the previous generation C-Class. Other aerodynamic touches help the fuel economy numbers rise to 24 mpg city and 31 mpg highway for a combined 27 mpg. My real-life numbers were a little lower because of the cold weather and sports + suspension.

Mercedes-Benz says the C300 AMG compares to the BMW 3 Series, Audi A4, Lexus IS, and the Cadillac ATS. Of that list, consider the 3 Series to be its equal and the A4 pretty darn close. The ATS and IS just aren’t in its league, except for size. It would be like saying all four-year olds in Brookline are equals.

The tires! When the right rear tire went flat, the tire pressure monitoring system warned me but the tire never let on it was flat. Plus the sports + suspension setting is just divine in a demonic way.

The price sets me back a little bit.

The C300 AMG 4MATIC has finally caught up to its German brethren in performance, design, and interior comfort. It’s now at the head of its class. 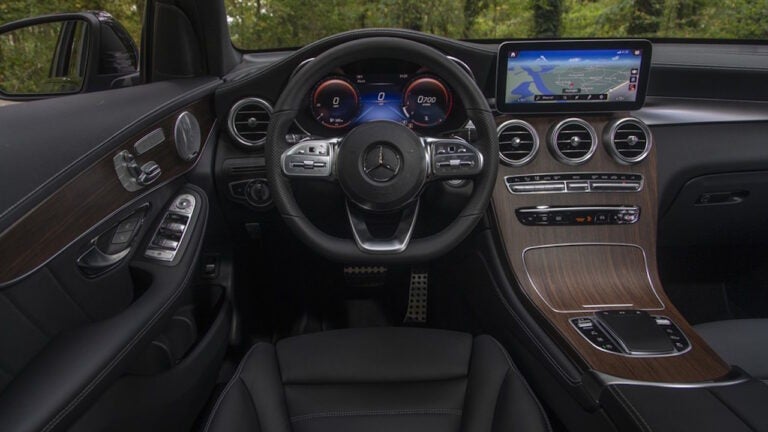 What the experts say about the 2020 Mercedes-Benz GLC