Henry Street, a two-lane roadway in North Amherst, looks like other streets in the New England town. But it’s not.

Because one rainy night each spring, as soon as the evening temperature rises above 40 degrees and the snow begins to thaw, hundreds of spotted salamanders emerge from their underground forest burrows on the east side of Henry Street to cross the road.

The dark gray (or bluish-black) yellow-spotted amphibians need to get to vernal pools on the west side of Henry Street so they can mate, but their annual voyage was historically made treacherous by cars that would inadvertently crush some of the creatures each spring.

Amherst residents were so concerned about the amphibians, Charney said, that in the early 1980s they formed a “bucket brigade,’’ standing along Henry Street on late March and early April nights to pick up roving salamanders and carry them safely to their breeding ponds.

In 1987, the British Fauna and Floral Preservation Society and ACO Polymer, a drainage company in Germany, heard about the salamanders’ predicament and provided funds for an experimental tunnel project for Henry Street, according to the U.S. Department of Transportation.

The underpass system, supported by The Amherst Department of Public Works, UMass, Massachusetts Audubon Society, and the Hitchcock Center for the Environment (a local conservation group), allow the spotted salamanders, as well as wood frogs and other amphibians, to safely migrate back and forth across Henry Street.

“The tunnels can accommodate the most concentrated migration,’’ said UMass Amherst Associate Professor Scott Jackson, who was deeply involved with the project. “Some still cross the road, but somewhere around 100 or 200 animals pass through the tunnels each year.’’

These crossing structures are tiny, Jackson said — about 10’’ high and 6’’ wide, and each tunnel has a slotted top to provide enough of the dampness salamanders need to keep from drying out. Fences guide the critters inside the mouths of the underpasses. 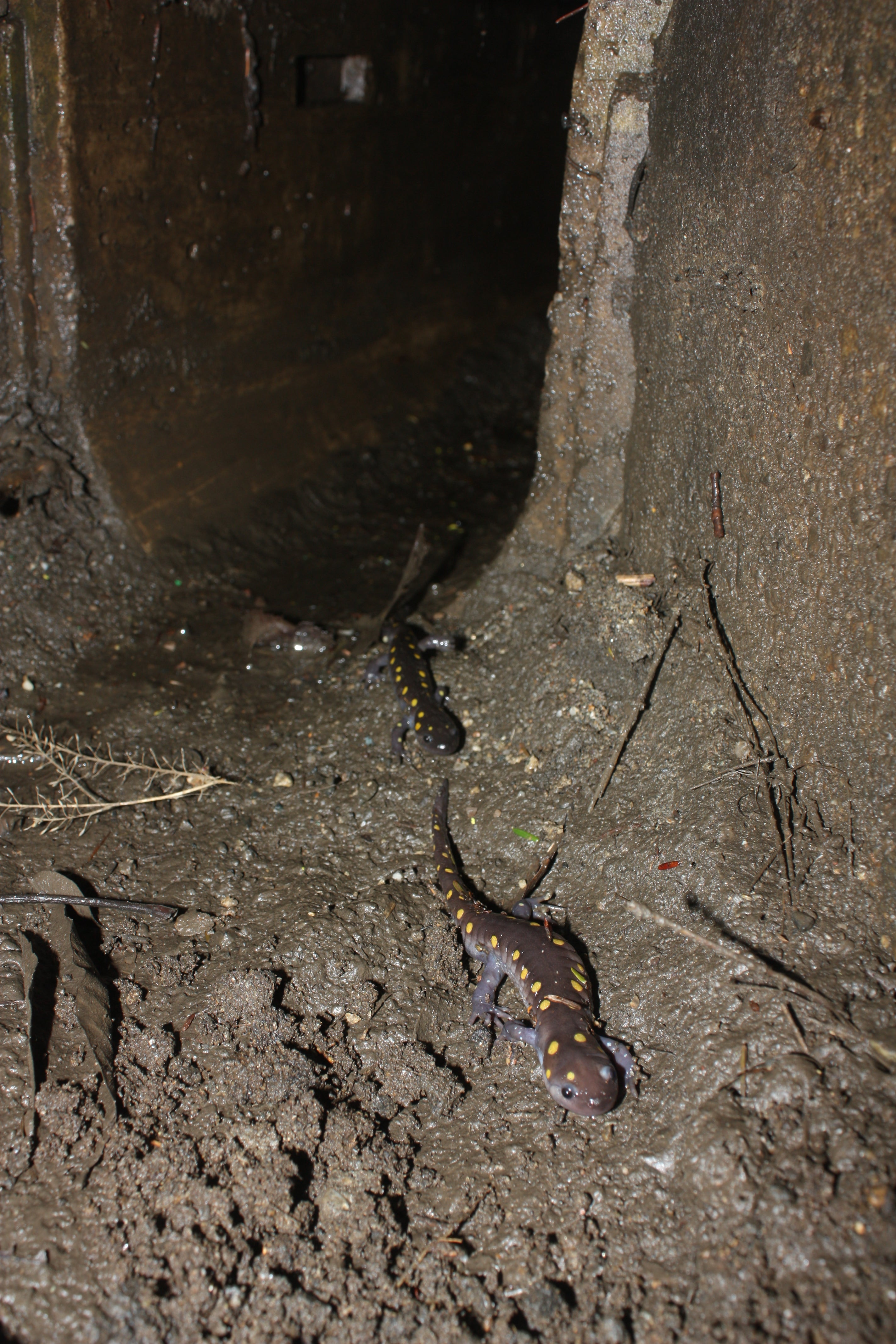 A pair of spotted salamanders emerge from one of the Henry Street underpasses.

Once the salamanders reach their vernal ponds, they spend about two to three weeks mating, with females laying milky-colored egg masses on plant stems or underwater sticks. The larvae hatch in a month, looking much like tadpoles, and transform into adults over the summer. Like their parents, they will make the trek across Henry Street to burrow underground for winter.

The salamander underpasses became so popular among Amherst residents they even inspired a local band’s name in the early 1990s: “Salamander Crossing,’’ a bluegrass group that produced three albums before disbanding in 1999.

Though the Henry Street salamander tunnel was the first amphibian underpass of its kind in the U.S., critter crossings — for all types of species — are becoming increasingly popular around the country.

Engineers from the Florida Department of Transportation have designed underpasses for black bears and alligators. And wildlife corridors have been proposed for areas like Santa Monica, California where animals such as mountain lions, coyotes, and bobcats are often hit by cars while trying to cross highways that border the Santa Monica Mountains.

With climate change, Charney said critter crossings would become increasingly important so animals that migrate seasonally end up in the “right’’ habitat for breeding purposes. “Over the past few decades, they’ve [critter crossings] become much more common and people are more excited about it,’’ Charney said.

If you’d still like the opportunity to witness the annual migration of the Amherst spotted salamanders, it might not be too late – just remember to bring a flashlight. Jackson said the amphibians are more likely to “gather their courage’’ to enter the underpasses if they’re guided with a little light. 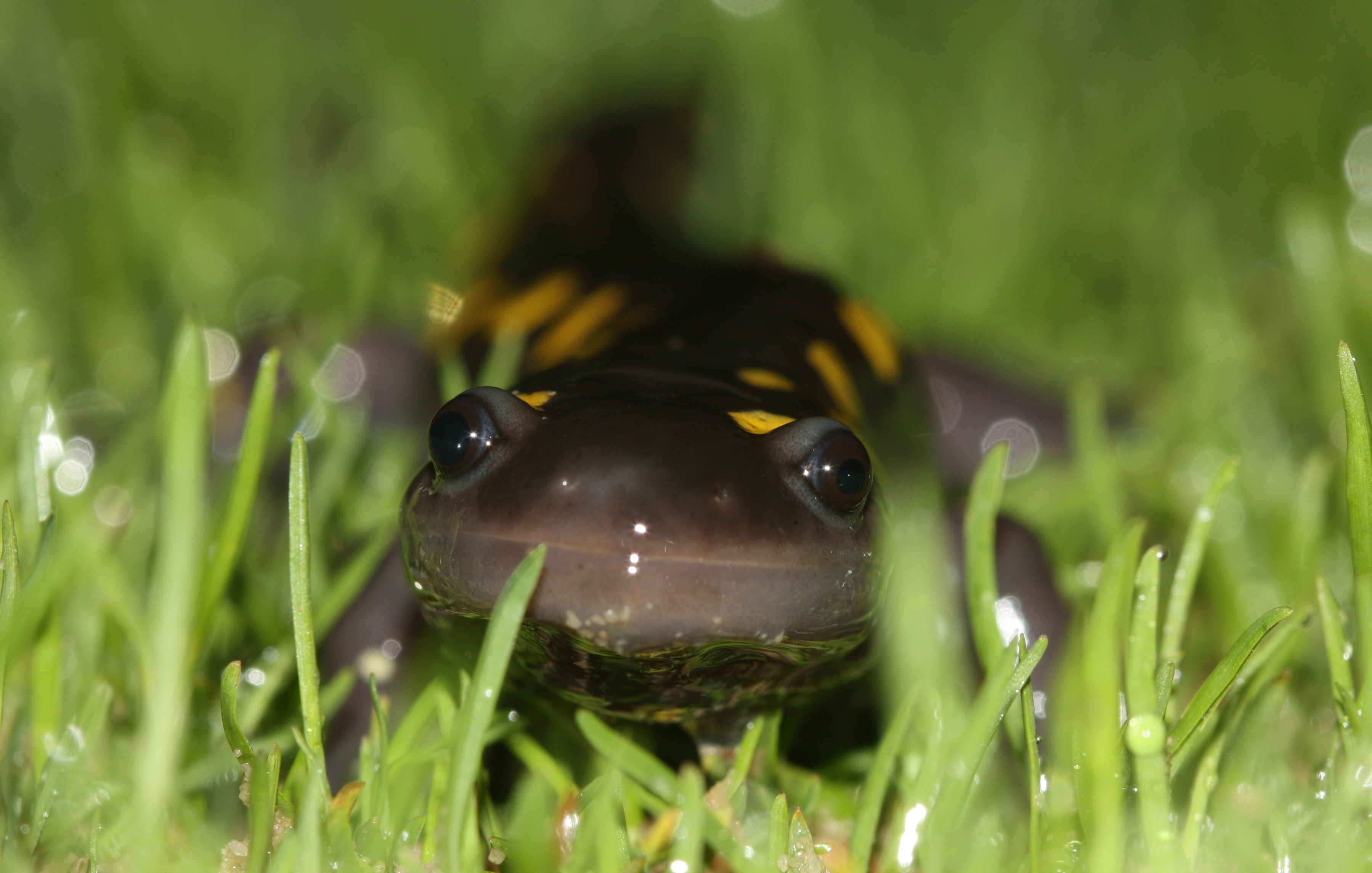 With the world on pause, salamanders own the road