The sale of an old estate, the entrance into a digital world, and the loss of a beloved cherry orchard are all at play in “The Orchard,” a new adaptation of Anton Chekov’s “The Cherry Orchard,” running at the Emerson Paramount Center through Nov. 13.

Starring Jessica Hecht as Lyubov Ranevskaya, an aristocratic woman whose family is in decline, and legendary dancer and choreographer Mikhail Baryshnikov as Firs, a devoted servant, “The Orchard” asks us to reckon with what happens when we are on the brink of letting go of the world as we know it. To pay off debt, Ranevskaya grapples with the possibility of having to sell her famed cherry orchard, a symbol of the past and its beauties.

In the hour-and-45-minute-long production from Arlekin Players Theater, “The Cherry Orchard” is a modern interpretation on how we handle the dissolution of “home,” and and how we face changes in our own lives. Igor Golyak is the Ukrainain-born director behind the show and founder of the theater group. Viewers are able to experience the production either live in person or virtually.

I attended the opening night of the “The Orchard” in person on Friday and spoke with some audience members to hear their thoughts. Overall, most of the five theater goers interviewed had an evocative experience and felt that it was a poignant production about leaving behind a former life. Below, you’ll find key takeaways from the show, along with how viewers felt about it after the curtains closed.

(Warning: This article reveals plot details and spoilers for “The Orchard.”)

The story is about loss, finding meaning, and ‘misplaced nostalgia’

The stage was set for a dream-like world, which was shrouded in misty blue lighting, video projections of the actors that appeared on a screen, and digital flying cherry blossoms that come down from above. The characters appeared on stage like apparitions as they all navigate a surreal realm — a family about to lose their estate. In the original production that premiered at the Moscow Art Theatre in 1904, Chekov sought to capture a shift in social structures during 20th century Russia, but the theme of change is still relevant today.

“As it all unfolded, it was so profound and complex,” Shaun Berry, an audience member from Arlington, said. She was particularly struck by “the layers of loss of ruling class and progression of time,” and what becomes irrelevant within those themes. As for the added layer of technology in the show, Berry said, “Reality is what we make of it. The main character [is] living in her own reality and can’t deal with loss.”

Berry noted the director’s Ukrainian heritage when a soldier character stops the scene and threatens Ranevskaya’s family, evoking the current climate of war. “[I]t was so jarring when the passerby, the military guy, comes in and breaks that fourth wall,” she said. “There’s no denying that that was a call to the invasion of Ukraine and the violence being felt there.”

Isaac Myer, a theater goer from Cambridge, said that he felt the original messages of the play were conveyed. “People [are] trying to navigate a world in which their social structures are changing and find meaning in their lives,” he said. “There’s an emphasis on misplaced nostalgia, or blind nostalgia.”

The robot and other on-stage tech had mixed reviews

A large robotic arm stands on stage throughout the show, contorting itself and interacting with the performers. It appears to be taking pictures but also assumes a life of its own, with audience members calling it a character in its own right. Other tech elements include the videos that are cast against a scrim in front of the actors. Some audience members felt this was a strong choice, posing the question if robots will displace humans the way the rising middle class displaced the aristocracy in early 20th century Russia.

“I could see how [the robot] completed its function; it kind of became its own thing,” Jasmine Hawkins, an Emerson College student, said. “I think they really did a good job in making it a character in the play. It definitely had something to say about the role that technology plays or the possibility that it could play in our lives, especially if we let it, to that extent.”

J.P. Clouse, an audience member from Somerville, said the technological elements could be somewhat distracting.

“I think they were interesting. I don’t think from a purely storytelling perspective they were that beneficial,” he said. “It was an interesting novelty, but I think it muddied some of what the play was trying to say. … It gave it a bit of a dystopian vibe.”

Performances from Hecht and Baryshnikov were mesmerizing

Hecht portrays Ranevskaya as the elegant, transfixing lady of the house, inhabiting the world of a bygone era. Her return to the estate from a sojourn in Paris reminds her of the death of her son Grisha, who had drowned. Meanwhile, Baryshnikov as the servant Firs is a quiet but powerful presence, dedicated to preserving the relics of the past.

“It was interesting to see someone known for grace and movement—ballet and modern dance—playing someone who is old, consciously shuffling,” audience member Penny Outlaw, from Medford, said. She added, “He seemed almost Zelig like. He had been there forever and witnessed everything that went on there. … He seemed very timeless.” On Hecht’s performance, she said Ranevskaya “created her own world from somewhere else and kept to it, until it was punctured in the end. It’s almost like it was a bubble, and then it was burst.”

Berry thought they were “wonderful” performances from both actors. “She was ethereal and captured that character so well in her surrender to the insanity of her grief, the absence of connection to reality,” she said. “And Baryshnikov, he represented the house, the estate, the past, the embodiment of that.” Berry believed that Firs was a character who was not going to change. “That’s why he gets left behind,” she said.

At the center of the “The Orchard,” the characters are living in a kind of postmodern, suspended reality. They are lost as they try to navigate their fragile transition from one world to the next. Viewers are left with the sense of having to find our own way in the end. While some found the robot and digital elements to be confusing, many felt that it was a multi-faceted show that illuminated important themes.

“I thought it was very fun for an in-person, live theater event,” Myer said. “I really liked the technological aspects of it. Having the interruption [of the passerby] in it too felt like it was connected to real life. Overall, it was enjoyable, and I have recommended it.”

“What moved me was the sense of family and the sense of home,” Outlaw said. The show, which she described as having an “otherwordly dimension,” caused her to reflect on the current state of the world. “It resonated with me politically in a way it probably wouldn’t have 10 years ago,” she said. “They’ve taken it out of normal time and space. … There is a sense of limbo. They’re waiting to move to the next stage.” 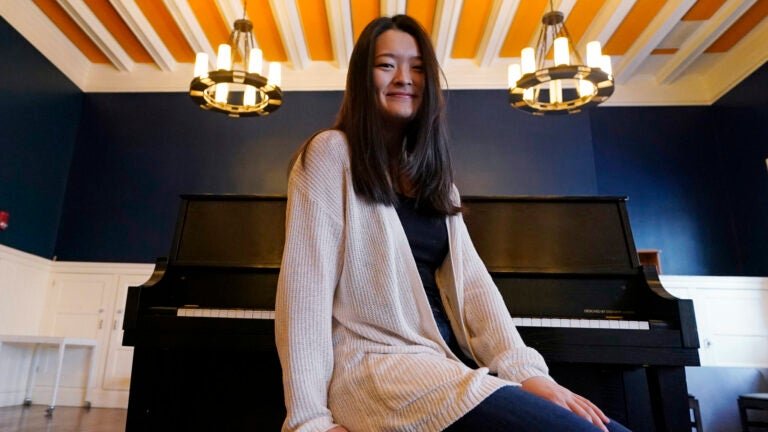