Though one may not think a career in medicine would lead to a life running a book store, Kathy Crowley feels the two go hand in hand. Crowley formerly worked as a physician at Boston Medical Center and an assistant professor of medicine at the Boston University School of Medicine, and now co-owns Belmont Books with her husband Chris Abouzeid. “Medicine is not so different, really,” said Crowley. “It has a strong narrative aspect. Patients tell their stories and you, the physician or nurse or other caretaker, listen and try to help them sort it out.”

Over a decade ago, Crowley and Abouzeid moved from Somerville — where they lived a stone’s throw from Porter Square Books — to Belmont. When they arrived, they discovered that the local bookstore in the area had shuttered over a year earlier. Every time the couple would walk through town, they’d notice the other thriving independently owned businesses and felt that bringing a literary presence back to Belmont would be a perfect fit. “We really missed having a bookstore nearby,” said Crowley. “We joked about how we should open one, and then, a million lease negotiations and a lot of construction later, we did.”

Despite the somewhat spontaneous nature of the decision, running a bookstore isn’t a surprising path for the pair who were already deeply connected to the local literary scene. Kathy is also a writer whose short stories have appeared in a wide range of literary magazines and she’s received numerous awards for her work from the Massachusetts Cultural Council, while Chris is a YA novelist and former magazine editor.

When the store opened in 2017 the couple envisioned it as a welcoming, warm, and an interesting “third place” for the community to gather and has certainly achieved that goal—offering cozy café seating for patrons to linger over a coffee among fellow book buffs in the pre-COVID era and keeping shelves stocked with reads that keep folks coming back. Crowley notes that she’ll often spot customers running into friends at the store or making plans to meet there, and she attributes much of the bookstore’s success to its kind and attentive staff.

“More times than I can count, I have seen members of our staff go above and beyond to help our customers,” said Crowley. “Part of this, I think, has to do with the kind of people who are drawn to bookselling and part of it is that we’re very lucky.”

The tight-knit, caring energy Crowley described extends far beyond just the four walls of Belmont Books, too. “When we decided to open our store in Belmont — located between Porter Square Books, Newtonville Books, and The Concord Bookshop — it would not have been unreasonable to expect some pushback,” said the bookseller. “We were possibly cutting into their customer bases. Instead, we got enthusiastic help and advice at every turn. It was incredible. It’s such a generous and supportive group.”

The idea of building a community is also something Crowley noticed while reading Jenna Blum’s “Woodrow on the Bench,” this month’s Book Club pick which reflects on the author’s relationship with her beloved late dog. “Woodrow provided not only company, as dogs do so well, but also, because of what she calls in the book The Woodrow Effect (the way that people were drawn to him), created this little micro community every time Jenna went out to walk with him,” said Crowley, who has known both Blum and her dog for years. “Jenna is so many things: a very talented writer, obviously, a serious reader, a great friend to many people, and teacher and mentor to so many writers. Here’s something else: She is very social! She loves to connect with people, throws great parties, and is so clearly energized by being around other humans. And yet she has this other powerful draw to writing, one of the most solitary endeavors…Woodrow made it possible for this very social person to pursue a kind of work that can be isolating.”

Considering the reclusive activities of reading and writing, Crowley feels the literary scene in Boston is “remarkable for its breadth and depth.” It offers a multitude of opportunities for literature lovers of all kinds to read, think, and talk about books, she said. Though, she still does love finding time alone to settle in with a good book before a busy day at the shop—savoring each page and sometimes even using a few personal tricks to make the story last a little longer.

“As much as I love reading before I go to sleep, nothing makes me happier than to wake up in the morning and be able to lie in bed and read for a while before I have to get up,” said Crowley. “Sometimes, when I’m reading a book I really love and I don’t want to end, I’ll make myself start at the beginning again, and allow myself to read just a few new pages at the end, before putting [it] down again.”

Join the Boston.com Book Club on Dec. 20 at 6 p.m. for a virtual discussion with Belmont Books co-owner Kathy Crowley and author Jenna Blum on her recently released memoir “Woodrow on the Bench: Life Lessons from a Wise Old Dog.”

Buy “Woodrow on the Bench” from: Bookshop | Belmont Books 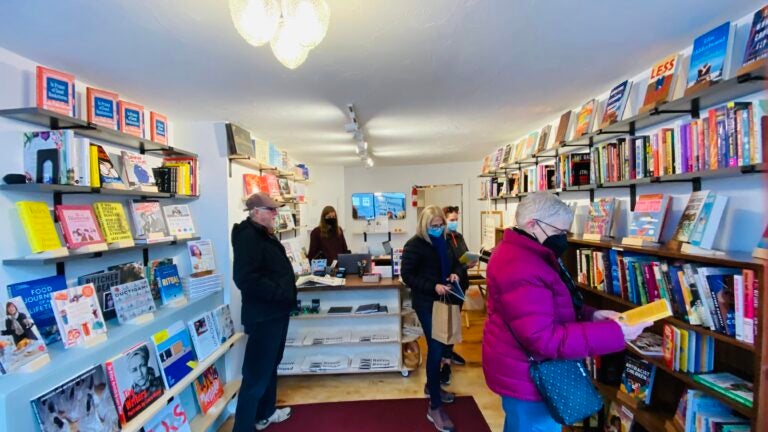