Vannaluck Hongthong admits that he was not always into cocktails. It was his wife who first caught the bug.

“I didn’t even know what the hospitality scene was to be completely frank,” he said.

The Long Island native spent much of his life in New York working as a foreman for his father’s manufacturing plant. It wasn’t until his wife started mixing at-home drinks, from mint juleps to mojitos, after growing too much mint in their garden, that Hongthong started to catch on too.

The couple ventured out to cocktail bars in New York City, visiting popular craft cocktail spots like The Flatiron Room and Dutch Kills bar. After moving to Massachusetts, they took bartending classes in Boston. It was a chance encounter with award-winning bartender Ran Duan at The Baldwin Bar that launched Hongthong into the world of hospitality. “Ran, for whatever reason, really liked me. He was like, ‘We’re looking to add somebody if you want to join on?’”

Hongthong spent a decade slinging drinks at The Baldwin Bar, The Bancroft, Row 34, and Island Creek oyster bar in Burlington, before transitioning to his current role with fine spirits producer Maison Ferrand as their New England off-premise specialist.

We caught up with Hongthong ahead of his virtual livestream class with the Boston.com Cocktail Club on Thursday evening — mixing spring cocktails with host Jackson Cannon — and discussed how he caught the hospitality bug, parenting in the pandemic, his pro tip for at-home cocktail enthusiasts.

Did you ever have a moment where you knew this career path was for you?

It was my first week after Baldwin Bar when I officially got the bug. To go way back even before my time at Baldwin, we just moved up here and I got a Groupon for a bartending class in Boston … And I was like, ‘Let me give this a whirl.’ It was a way to learn the area a little bit to make some new friends. We just moved up here and didn’t really know a ton of people. … But then when we went to Baldwin Bar, I was like now I really like it. Even when we walked in the place it was super cool. After the first week, I quit my other jobs. I wasn’t a foreman anymore. I went right into hospitality.

Can you talk about a project that you are particularly proud of during your career?

My middle son has a rare neurological disease. So November is FOXG1 awareness month and during my time at Island Creek and then when we transitioned into Row 34, I was fortunate enough to have a November specialty cocktail that we donated proceeds from the sale to the FOXG1 foundation. On a personal level that was something near and dear. I was really thankful that it was able to become a thing. We did it before the pandemic, and then obviously COVID happened, and once we reopened again we were able to do it again. It was just a kind gesture and people were so receptive to it. People were really kind, and it was nice to feel a lot of love through that project.

What has the pandemic been like as a parent?

Being in the bar industry, I tried to squeeze in family time … the late nights getting home, trying to get up early and have meaningful time. … The days off that my wife and I would have together, there was always this … great expectation that every hang that we had together needed to be a monumental family hang. And then COVID happened and it was like, [I’m] in bed by eight o’clock, I’m up at 6 a.m. I’m making breakfast, lunch, and dinner. It was awesome. That was the best thing for me was to have that time because it’d been so long at that point that I forgot what it was like. That was a little bit of the catalyst for me to switch out of the restaurant industry into this new role [at Maison Ferrand]. I just was chasing that high of a being Dad, for lack of a better term.

Tell us about the transition out of bartending into your current role with Maison Ferrand.

It’s different, but not. Yes, you’re not as guest-facing. … It’s quick moving. You want people to know it’s a great product. You want people to taste it. You want them to know that I will be here to help educate guests by doing a store tasting so people can have a name with the brand, and they have an experience with the brand. … So it’s a little bit of a different kind of a pivot. It’s still hospitality-focused, it’s just your interaction time is insanely brief. You have to make the most impact for that 10 to 15 seconds where the person isn’t blatantly ignoring you, or is somewhat curious [about] what you’re doing.

If you were a cocktail what would you be, and why?

A Tom Collins is my favorite. That is a drink that I’ll make myself at home. I don’t really try to make many drinks at home just because it’s like what I do all day. So a Tom Collins is easy. I always have the ingredients and it’s just the most refreshing drink. You could have any day of the week, any time of day, any season, which I know some people are summer enthusiasts of a good Collins. Gin, lemon, simple, and soda water is good all year round for me.

Do you have any tips for at-home cocktail enthusiasts?

My best tip: It’s your ice. Some people have had ice in their ice trays that have been there for the latter part of I don’t know how long. If you’re making drinks, especially if you have any gathering in your house, just getting a bag of ice from the grocery store will be your best friend. And for God’s sakes, don’t buy any citrus in plastic lemons or lime shaped containers. 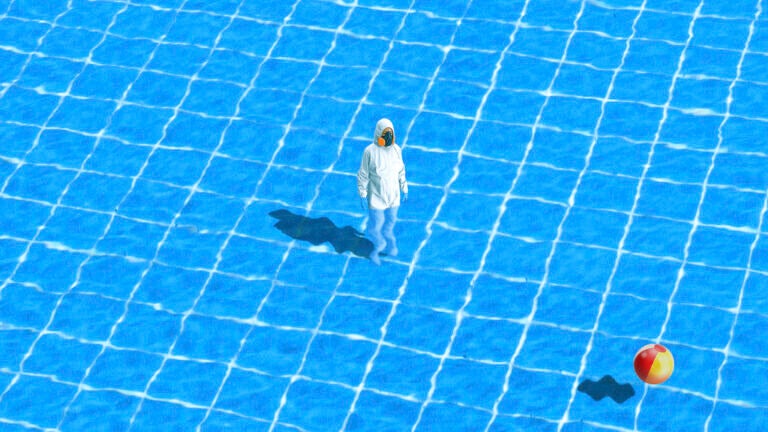 How to avoid nasty pool germs this summer