LyAnna Sanabria thinks of her Puerto Rican heritage when she creates a new cocktail: The local bartender grew up in New England, but her powerful recollection of relatives cooking and making food serves as inspiration behind the bar. In early January, she will be opening Papi, a Puerto Rican-inspired restaurant and bar in Portland, Maine, which will give her a stage to draw from her culture.

The co-founder and beverage director described Papi as “an elevated Puerto Rican bar,” which she will run alongside chef and co-founder Ronnie Medlock. Papi will be the latest restaurant to open under the Miranda Restaurant Group, owned by Joshua Miranda. “Being able to share our food with people, in the guise of a very pretty bar is, for me, the most exciting,” Sanabria said.

We had the chance to chat with Sanabria in advance of her virtual event with Cocktail Club on Thursday evening, and she shared inspiration behind her drinks, what family means to her, and how she got her start in the beverage industry.

This interview has been lightly edited for clarity.

How did you get started creating cocktails?

I went to school in Boston, and I worked with a lot of kids, women, and psychology programs. … That’s not exactly where money is allocated. I realized pretty quickly if I want to do this, I have to make money some other way. I realized I could work at dive bars at night and be able to pull in cash, and have a schedule where I could still access the community I was looking to [serve]. Then I realized that the merging of the two I really liked.

I moved to Maine five years ago and split between dive bars and a craft bar. I kind of got lucky where I had a few people who wanted to mentor me. They realized I was going to catch on pretty quickly. I’ve been cooking since I was a little kid. My palate is pretty good. … I taste color, and it’s easy for me to tell if something is balanced. Adding those things together and an interest in hospitality made it so that I started crafting things anytime I was behind the bar. Even if it wasn’t my program, I was always playing with flavors. … It was at a gin bar … there was a tasting room, and it was the beginning of COVID. I was basically alone in this huge distillery, and I needed something to do. I came up with a cocktail club, where I would just come up with crazy creations and flavors. But gin was the base, and it was the only base, so it made me be really creative.

How would you describe the energy of Papi, and how do you want people to feel when they come visit?

When we were talking about what we want it to feel like, trying to give examples of other craft Puerto Rican bars was hard, because we couldn’t really think of any that were forward-facing, just Puerto Rican. There’s Latin, pan Latin, Mexican. The vibe that we created was a bar that you want to go into. For me, that’s this feeling of unadulterated Puerto Rican hospitality. I live in Maine, so a lot of the time, my personality or my way of being behind the bar is given credit to me, which is cool. But the other side of that is that the way that I am behind the bar that people aren’t familiar with is being Puerto Rican. A lot of the way that I behave, I talk, the hand gestures, the rich flavors that I like to put together, it’s very Puerto Rican. So I’m very excited to bring that vibe, where I want people to feel like they can be loud like they’re at a bar, they’re accepted. But I also want really pretty plates, glassware, and chemistry going into the glasses that’s very thoughtful. Tito Puente is going to be playing, we’re going to have light appetizers, [people] can come and sit down and hang out. As the night progresses, Friday at 10 p.m., there’s definitely going to be Bad Bunny. We’ll move some seats to the side, and people can feel free to stand and dance.

What inspires the drinks that you make?

The chef and I both had a similar feeling in terms of the drinks and food. He says either your family understands how food is love, or they don’t. His words are: I’m very sorry if they didn’t, but I will cook for you. We both have these really strong images of our grandmothers’ hands as little kids, dancing, mashing the bananas, the mortar and the pestle. There’s a lot of images of hands and smell. … There’s not necessarily that many classic cocktails, but what people don’t know about Puerto Rico is how they drink. Everybody is like, “Rum, rum, rum!” Yeah, they export an insane amount of rum per that tiny island. But sugar cane was not a native product there. That was brought by conquistadors, and that’s a part of the history. They drink a lot of scotch. They drink a lot of gin. I want to highlight watching my grandmother cook. … They’ll drink scotch and coconut water. Watching my grandfather grab a machete and chop the top off of a coconut, or my grandmother using a mortar and pestle to make sofrito—there are these things with the hands that I want to bring into the cocktails.

I have such a bizarre personality. Sometimes I’m really outgoing. My immediate thought was I would be a piña colada. It would be fruity and really flamboyant, and then all of a sudden you’d be like, “I’m pretty sure I’m really drunk. That was a lot of rum.” I think I could be that, but then I think I’m more of a Hanky Panky. That’s the contrast. It’s a serious, booze-forward cocktail. At the same time, it’s called a Hanky Panky. … It’s one of the only cocktails that for the longest time was given credit to a woman behind the bar. So I guess that also immediately sticks in my head. It’s a woman-backed cocktail that’s stood the test of time. I love the category of pink drinks. But as a woman, she didn’t have to make a pink drink. It’s a booze-forward, very bartender-loving cocktail. A little bitter, a little boozy, a little femme, at the same time.

Join our next virtual event 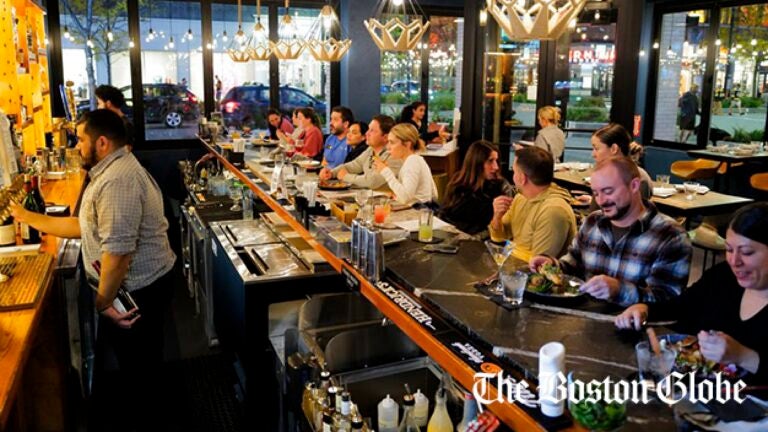