Before moving to Portland, Maine, the husband and wife team of Andrew and Briana Volk were living in another Portland across the country, in Oregon. Andrew had been working in a cocktail bar, while Briana had a career in advertising, but they both knew that starting their own lounge was something that excited them.

“I grew up in New England. Briana grew up on the West Coast. We met out in Portland, Oregon, where I was working as a bartender, and found our way back here, back in 2011,” said Andrew. “The food scene in Portland, Maine has been for many years phenomenal. And the beer scene, when we got here, was and continues to be some of the best beer in the country.”

However, Andrew noted, there were few bars that focused exclusively on cocktails, leading the Volks to launch their own. “We found a space, put everything together, and opened in 2013.”

The Volks will lead a virtual class with the Boston.com Cocktail Club on September 1, where they will be mixing a Sherry Cobbler with late harvest fruits and a Volk’s original, Chilton County. Ahead of that event, we chatted with them about their Scandinavian-inspired cocktail lounge, Briana’s two cookbooks, and what inspires their creative drinks.

How did you know that you wanted to work in the cocktail and hospitality industry?

Andrew: For me, it was really fun to play with drinks, to be on the leading edge of what people were doing around the country. But these days, what excites me the most is the excitement you see on guests and co-workers, coming up with your drinks, the people. Both of us really enjoy the hospitality industry and giving people great experiences. To see guests’ reactions when they get something they’re really excited about, or when staff start presenting drinks for our new menus, is a lot of fun.

Briana: To me, I really look at it as an art form and as a way of storytelling. Every guest gets to be part of creating an experience for themselves. I love the idea of giving people great experiences. My passion really lies in being able to provide that. On the employer side of it, being able to provide good, steady jobs for people [is important]. When I met Andrew and we first started dating, bartending still wasn’t considered a career that you could have. [I’ve seen that you can] really try to make that something that is a career and something that you can spend your life doing, finding ways to do it in a healthy, balanced way.

How would you describe the vibe of Portland Hunt + Alpine Club?

Briana: It’s bright, it’s airy; it really leans towards Scandinavian design. We try to design it to be like the coolest, Finnish ski lodge you’d ever walk into. … It leans a little mid-century, in that sense. There are big, long communal tables. … We have a really beautiful patio out front that we themed after feeling like you’re in the beach dunes. Big, tall grasses surround you and swish around you. During the day, you’re going to see lots of couples with young children coming in and hanging out. Early at night, you’ll see people after work coming in. As it gets later, the crowd definitely skews younger.

… We have two kids. We have an eight-year-old and a five-year-old. People our age, in their late 30s and early 40s, most of them have children. The people we were surrounding ourselves with in our 20s and early 30s, going to cocktail bars, going to places, are now married with kids. The experience is kind of what people want. It’s great to see people coming in with their young kids and hanging out. We have apple juice boxes and things for kids. But you want to have an after-work experience. Our staff is good at catering to the experience you’re looking for. You don’t come in and get one experience.

Briana, can you tell us about your cookbooks, “Northern Hospitality” and “Wonder Woman: The Official Cookbook”?

Briana: The first one I wrote was “Northern Hospitality,” essentially a Hunt Alpine cookbook. It was great to tell the story of Hunt and have this piece that can walk away with people, who can feel the Hunt experience, wherever they are. The goal was to tell our story and have some great recipes in there. The second book I got commissioned for. When “Wonder Woman 1984” came out, I was commissioned by a publisher to write a cookbook to go alongside that.

Andrew: It’s a lot of fun. The process can very much vary from being inspired by a flavor, a new product, or a dish that I’ve had, wanting to play around with that. Or it can come organically from a name or a riff on something else. It really is all over the place. For me, one of the exciting things is the process of creating a menu or new drink with a group of people. It’s one thing to do it on your own, but to have a conversation with other professionals who have different points of views, palettes, and ideas, to be able to bounce those ideas around is the most exciting part.

[At Hunt], the theme right now is “The Shore,” lots of fun, summer drinks with different interpretations of what that could mean. We’re starting to brainstorm our early fall menu, which is going to be “Forest.” Seeing what our bartenders are working on, it could run the gamut from riffs on classics that have apple in them to using shitake or a parsnip syrup.

If you were a cocktail, what would you be and why?

Andrew: If I was a cocktail, I’d be a DTO. It’s very New England, very particular to Boston. It stands for Daiquiri Time Out. It’s every person’s riff on a rum, lime, sugar drink. When things are getting hectic, you need to sit down, slow down for a second, and take a Daiquiri Time Out. When someone walks in and asks for a DTO, it’s rum, lime, sugar, and dashes of Peychaud bitters. It’s got herbal undertones, and it’s a bright red, bright pink color that, once mixed with lime juice, really kind of shines.

Briana: If I’m being honest, I’d probably be a Cosmo. A really good one, which is hard to find. To me, it’s a modern classic. When you get a good one, it’s absolutely excellent. But it’s also fun; it’s irreverent. People tie it to “Sex and the City.” But a really good Cosmo is a surprisingly phenomenal drink. And I’ve had that idea of changing people’s perspectives on good cocktails. 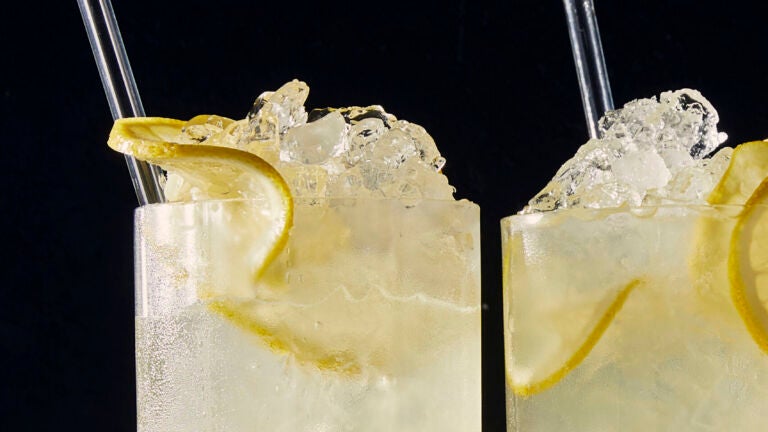 This cocktail will change your mind about sherry