In a year, the average person consumes approximately 100 pounds of textiles and almost 81% of that ends up in the general trash. The city of Boston, in collaboration with Northeast-based textile recycling company Helpsy, is trying to change that.

Acting Mayor Kim Janey recently announced an initiative to bring textile and clothing drop-boxes to 11 new locations in the Boston area in an attempt to reduce the amount entering the waste stream. The new boxes are located in lots of public schools in the South End, Dorchester, Fenway, Jamaica Plain, Chinatown, Back Bay, and Charlestown.

The boxes are run by Helpsy, which collaborated with Boston Public Works to begin a recycling initiative of textile and clothing boxes in fall of 2020. Now, the city has over 20 drop-boxes in various locations.

“Our goal when we think about where we’re going to place [the boxes] is, what would be easy and convenient on the way for people?” said Lisa Sciannella, director of sales and municipal relations at Helpsy. “School is a great fit for that.”

Anyone can donate worn and used clothing as well as textiles such as towels, beddings, curtains and throw rugs. The items are then hand inspected by Helpsy and separated into those that can be resold, reused by being cut into absorbent cleaning rags, or reused for insulation and padding.

The clothing and textiles in good condition are resold to both domestic and international vendors who buy clothing in bulk. According to the press release, Helpsy will calculate the pounds of clothes that were collected from the boxes placed in BPS locations every month and send the school a check quarterly, making it profitable for the schools getting involved.

Although Helpsy runs drop-boxes at other school locations, this is the first time they have had a county- or city-wide initiative. Sciannella said that they hope to add more BPS drop-boxes in the fall.

Helpsy also works with thrift stores to sell their overflow of products to these vendors as well. Oftentimes, thrift stores will receive too many items to fit on their shelves, or find themselves with clothes from last season that don’t sell. Then, they will recycle to companies like Helpsy.

“It’s all part of that business model that drives our mission of keeping all clothes out of the trash,” Sciannella told Boston.com.

“The initiative builds out infrastructure for diverting textiles from disposal as part of Boston’s zero waste plan to achieve 80% recycling by 2035 and 90% by 2050,” Alves said.

The Boston zero waste plan, which was released in June 2019, serves as a report offering long-term recommendations for Boston to “reduce the consumption of natural resources and emission of greenhouse gases,” effectively becoming carbon-neutral and climate-ready by 2050.

Alves also stated that the drop-boxes serve as a way to promote sustainability awareness and textile waste reduction among the BPS students. This is not the first time the city has addressed this issue alongside BPS. The city of Boston previously worked with Bay State Textile boxes to provide a similar service at BPS locations.

Note: This article has been corrected to reflect the current locations of the school drop-off boxes. 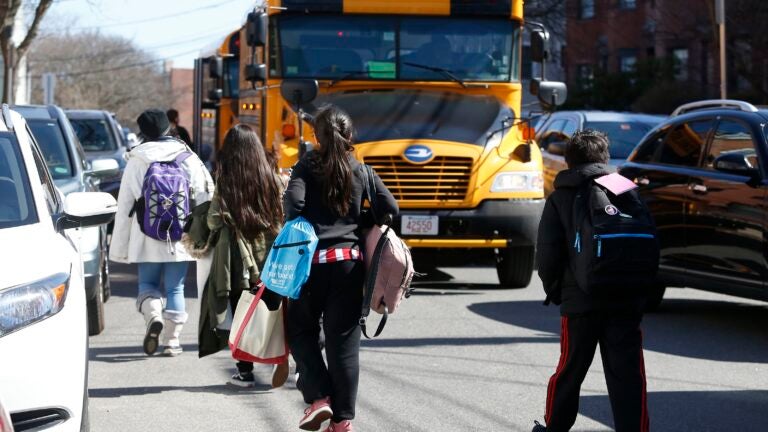