Apple picking enthusiasts looking to escape the city this fall don’t have to travel far.

When we asked Boston.com readers for their favorite place to pick apples in Massachusetts, they named 29 farms within an hour of Boston.

Honey Pot Hill Orchards in Stow was the clear favorite, with the most votes out of 45 farms named by more than 200 readers. The farm offers nearly 200 acres of orchards, as well as mazes, hayrides, and farm animals.

But there are other local farms topping orchard-goers’ lists. Cider Hill Farm in Amesbury was recently named the No. 1 apple picking spot in the U.S. by Yelp. And Tougas Family Farm in Northborough was just named among the 10 best apple orchards in America by USA Today readers.

Below are 29 apple orchards within an hour of Boston named as reader favorites and how far they are from the city, according to Google Maps.

29 best places to go apple picking near Boston, according to readers

What readers are saying:

“Apple cider donuts like you read about. And a drive like you dream about,” wrote @damonquin about Honey Pot Hill Orchards in Stow.

“It’s family run, tons of apple varieties, and the staff is super friendly!!” wrote @merisa.kouvo about Shelburne Farm in Stow.

“The best apples in the state,” wrote @jtsaragosa about Parlee Farms in Tyngsboro. “Orchards are clean, organized and the apples are huge and high quality.”

“Great variety of apples, lots of pumpkins and the cider donuts are to die for,” wrote a reader about Cider Hill Farm in Amesbury. “Lots of fun activities for the kids, including a petting zoo, animal themed swings, hayrides and a haystack obstacle course. They also have a great variety of products from food to gifts. It’s an awesome take on a beautiful late summer or fall weekend day.” 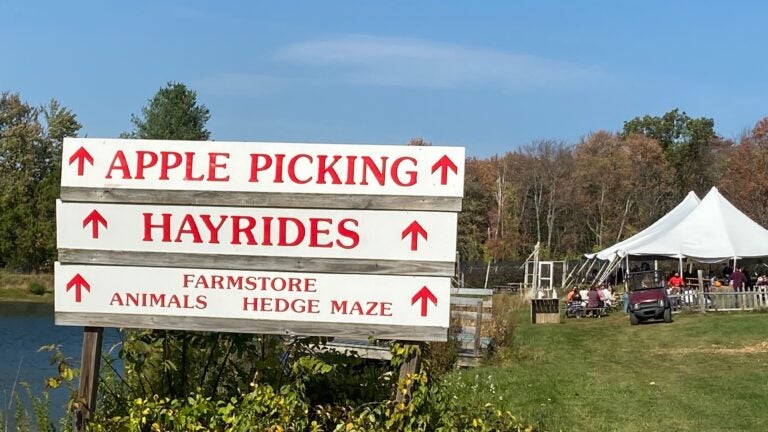