Though he grew up in land-locked Pittsburgh, Pa., local writer Nathaniel Philbrick developed a love of sailing. It was this passion for exploration that sparked a unique idea for his 13th book. “Travels with George: In Search of Washington and His Legacy” follows the acclaimed author, his wife, and their dog as they retrace George Washington’s post-inauguration travels around the country—adding humor and personal anecdotes to the rich history he typically writes about.

Last week, the Book Club hosted a discussion with Philbrick about the new book. Moderated by Tim Ehrenberg, marketing director for Nantucket Book Partners, the talk covered how we should view the founding fathers in the present, rough moments from Philbrick’s trip, the author’s beloved dog, the one question he would ask Washington, and more.

“Most of them are straight histories that take me three to four years to research and write,” said the author. “I’m in the archives; I’m in my basement office—which you see behind me—and I don’t get out much (laughs).” Each book for me is a different narrative challenge. And what I really looked forward to was going between my voice with our journey and the more straight history voice with Washington’s journey. The whole book is more informal voice.”

Dora the dog is a Nova Scotia duck tolling retriever

Philbrick’s dog, Dora, was a captivating character in the book in her own right. The writer said she looks like a fox, loves to go sailing with him and his wife, and “has the potential to outwit you.”

“I grew up thinking of George Washington as the dullest thing in history,” said the writer. Yet after completing his first book of three on the Revolution, his opinion changed. Thinking of the moment where Washington arrived after the battle of Bunker Hill, Philbrick saw the leader as aggressive and exciting, a brash individual and savvy politician, yet also a man of great patience. “This is not the George Washington staring at you glumly from the dollar bill. … We owe the fact that we have a country today to the fact that he was our first president.”

Despite knowing so much about Washington, Philbrick uncovered a surprising fact during the writing process for this book

“I did not comprehend how reluctant Washington was to become president,” said Philbrick. Though Washington was the most famous man in the world at the time for having won the American Revolution, he wasn’t keen on being in power. Philbrick discovered this when researching the president’s inauguration in Federal Hall. Washington falls into a chair and the crowd goes quiet, noticing how he’s feeling the burden of the country on his shoulders. For the writer, this was a moment in Washington’s life that was “very human in a way he did not anticipate.”

Washington inherited a group of enslaved people at age 11, yet was considered progressive for his time since he agreed to emancipate them upon his death (the only founding father to do so). Yet, Philbrick feels we can’t give him full credit because that raises the question of why he wouldn’t free them sooner if he felt slavery was wrong.

“When it comes to the founding fathers, you have to look at the time in which they operated,” the author said. “It’s very easy now to take what we see as the right thing and judge them for that, and that’s part of what history is about.”

Unlike the luxuries we see today, the president had no security detail, traveled by horse and carriage, has an entourage of about a half-dozen people, and stayed above taverns (the historic equivalent to roadside motels). He did this to make the point that he was one of the people.

Like Washington’s journey, the book was not always smooth sailing—literally

When Washington finally made it to Rhode Island, he sailed from the temporary capital in New York. Philbrick and his wife, Melissa, decided to honor this leg of the journey by taking their own sailboat to Newport. The couple was sailing through Vineyard Sound when a tornado warning notification flashed on their phones. Minutes later, a thick sheet of rain and heavy gusts of wind that clocked in at 70 knots came down on their ship. The author said it was their scariest 30 minutes together ever and he was glad they left Dora the dog at home for this leg of the journey.

If the author could ask Washington any one question, it would be this:

“Why did you pursue Ona Judge?” One Judge was a woman formerly enslaved by Martha Washington’s family before she escaped. Washington devoted much of his time leading up to his death trying to get her back. Philbrick would ask Washington why he chose to do this, given it seems to be inconsistent with his beliefs.

For his next project, Philbrick is turning his attention to the West coast

Next, Philbrick is working on a book about the California gold rush. He became introduced to the historical event through Nantucket, since the island lost a quarter of its boating population in nine months to gold fields when it was discovered.

Join the Boston.com Book Club on Dec. 20 at 6 p.m. for a virtual discussion with Belmont Books co-owner Kathy Crowley and author Jenna Blum on her recently released memoir “Woodrow on the Bench: Life Lessons from a Wise Old Dog.”

Buy “Woodrow on the Bench” from: Bookshop | Belmont Books 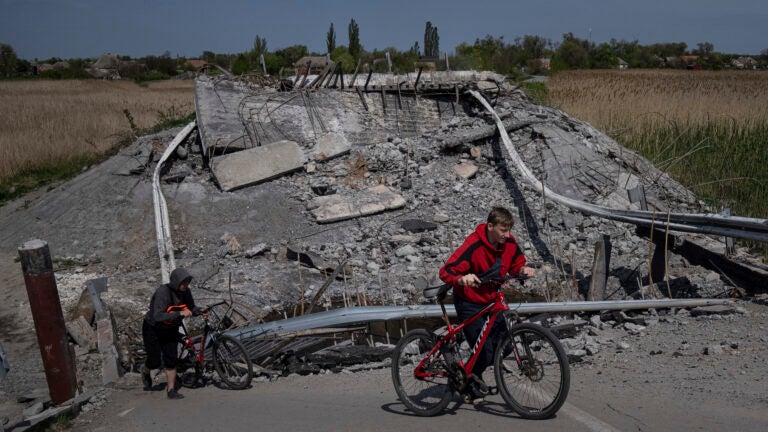 Live updates | Biden: US sending another $150M in assistance