If you need inspiration as you draft your reading list for the next 12 months, look no further than this list of picks from Boston.com readers.

Before New Year’s Day, we asked our readers which titles they were most looking forward to reading this year and they shared a list of titles that span genres and themes. Many of the books featured on this list are widely-praised releases from last year, but there are also some classics and soon-to-be-released titles in the mix.

Take a look at the reader-recommended selection below to add to your to-be-read pile in 2023.

Like a couple of readers featured on this list, Annette from Gloucester is excited to continue on a series in 2023. In the next installment of this mystery series, a head investigator unravels a century-old mystery after a letter from the victim is discovered hidden in an old attic.

“Her books about Chief Inspector Gamache and Three Pines and the Surete in Quebec always touch your heart,” Annette shared. “This is number 18 in this series and hoping for 19 next.”

This book, released on paperback in 2022, about an immigrant’s journey from Mexico to the United States has the Oprah Book Club seal of approval. Protagonist Lydia is forced to the states after her journalist husband is threatened by a drug lord in Acapulco.

“I love learning about Latin American culture through novels. It confirms my belief that we all want the same things at the end of the day — a safe place to live in peace with our families,” said Valerie D. from Newton.

This fantasy novel, set in an alternate reality of the Industrial Revolution, was one of the acclaimed releases of 2022.

“As someone who is pretty new to dark academia, I am excited to dive right into the genre with this encapsulating book,” said Tracy P. from Halifax.

The next book in this fantasy romance series has yet to release a publish date, but Alene from Bridgewater is eagerly waiting for the announcement following “House of Earth and Blood” (2020) and “House of Sky and Breath” (2022).

“I love this series,” she told Boston.com. “Sarah J. Maas is amazing.”

This novel is a modern retelling of the Charles Dickens classic set in the mountains of southern Appalachia.

“I am a big fan of ‘David Copperfield’ and this book borrows its narrative structure,” said Susanne D. from Jamaica Plain.

“She is an incredible author and the subject matter is timely,” said Kirsten U. from Chelmsford.

“Marrying Myself” by Christine Melanie Benson (2022)

This debut novel is set in Boston and turns a typical romance novel on its head when the protagonist’s fairytale wedding takes a disastrous turn.

Frank L. from West Roxbury said he’s adding it to his reading list because the author is a friend.

“It’s set in the North End where she previously lived. She left here for NYC and now resides in Nashville. This is her first book and I’m excited for her!”

This novel is set during an alternate history of World War I, where the story’s lead works as a nurse and spy in occupied France.

This twentieth-century novel is about the lives of a collection of characters from Egdon Heath who are forced to contend with the way chance determines the course of their lives.

“I believe not all ‘new’ is best,” Cynthia from Gloucester told Boston.com. “Need to return to classics as well. Even struggle through ‘Moby Dick.'”

This book is the latest in the Prey mystery series. In this story, the story’s leads are up against a vigilante group looking for revenge. While Michael L. from Mansfield recommends reading the series from the start, he’s looking forward to the latest installment.

“The author is always interesting and entertaining,” he said.

This novel follows a group of orphaned children from their childhood in 1960s Laos to their adult lives.

The scope of this novel is big. The story takes place during the California gold rush, the development of the transcontinental railroad, and the modern day. Evison tells a story of American nation-building through his compelling storytelling.

This debut novel is written by identical twin sisters and writing duo Amber and Danielle Brown. Their thriller follows two women thrown into criminal high stakes of the luxury fashion world. Tracy P. from Dorchester said she was drawn in by the book’s cover.

“The Marriage Portrait” by Maggie O’Farrell (2022)

This fictional account of the life and marriage of the young Italian duchess Lucrezia de’ Medici was a critical favorite last year and makes the top of this year’s reading list for one reader. O’Farrell’s other novel was featured on Boston.com’s reader-recommended guide to 2022 reading.

Learn more about the life of Tom Felton, whose childhood and adolescent years were shaped by playing Draco Malfoy in the Harry Potter movie franchise.

“I’ve gotten into autobiographies this past year and I’m excited to continue the trend into this coming year,” said Emily L. from Brighton.

With this reader-recommended cookbook, you can focus on two popular resolutions at once: read more and live a healthier lifestyle.

If you’ve watched the “Harry and Meghan” Netlfix series and can’t get enough of this royal story, readers recommend you try this book in the new year. The book tells the story of how the couple met, why they stepped away from the royal family, and includes photos from their journey.

This nonfiction read is about the groups of Third Reich supporters in the United States before the start of World War II.

“My 2023 reading goal is to read 23 books, all by authors who were born outside of the United States. I am eager to read Prince Harry’s new memoir because I believe he has a unique perspective of the royal family and his journey from a member of The Firm to an independent citizen promises to be an interesting read,” said Hilary S. from Ashland. “Spare” is set to release on January 10.

This book is about the writing of T.S. Eliot’s iconic poem about the moral decay of a post-war era.

“The poem is fascinating and difficult,” Jeff from Brookline. “I want to learn the context surrounding its writing/editing and better understand it and T.S. Eliot.”

This non-fiction title explores the history of how scientists discovered cells and have since learned to manipulate them to further scientific knowledge.

“I read ‘The Emperor of All Maladies’ which was great,” Christine F. from Manchester, N.H. “I’m interested in what he has to say about depression and its treatment.”

This is a look at Western philosophy for those looking to expand their understanding of human thought and intellectual achievement in the New Year.

“I find the history of thought a compelling study. Those who fail to learn from history are often doomed to repeat it,” said Jonathan A. from Brookline.

“With All Due Respect: Defending America with Grit and Grace” by Nikki R. Haley (2019)

In this book, the former United States Ambassador to the United Nations gives a behind-the-scenes account of her time in the Trump administration. 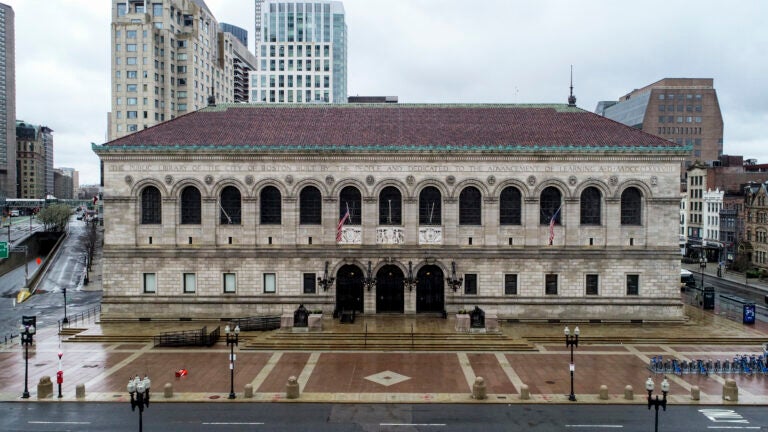 The Boston Public Library released its ‘Black Is…’ booklist for 2023. Here’s what’s on it.