Eating a lobster can be a little bit intimidating. Seeing the bright red creature on your plate, ready for you to dig in, you might find yourself wondering where to start. And if you live in New England, chances are that you will find yourself in this situation at least once a summer. Luckily, we asked our readers what their methods are for tackling a lobster, and they responded with their steps, tips, and tricks.

You may need a few things. Having a pair of crackers and a cocktail fork is helpful, but you may also want some clarified butter and a fresh lemon on hand. We heard back from 53 readers who walked us through what to do next, and we’ve highlighted three guides below, along with some pointers. So scroll down, and let us help you learn how to eat a lobster.

These responses have been lightly edited for clarity.

Readers told us: The steps

1. Turn the lobster on its back, and straighten the tail. Hold the beast from the top over the chest (where the little legs are), take your other hand, hold the tail near the end of the tail, and bend down to “split” the lobster in two, the tail and the upper body. [Be] careful to pull the tail away from the body, as there’s some long meat strands that will slide out; you want to keep that intact.

2. Fan out the fins at the bottom of the tail, hold them fanned out in your hand, and bend back to snap them off the main tail.

3. With your index finger and maybe your middle finger (depending on your hand size), “goose” the tail from the “fins side” to push the tail meat out the larger side. If all goes right, it should slide out in one piece (may need a bit of coaxing).

Peel the top of the tail meat off to expose the “vein,” and clean that out. Put that top part and the tail meat in the drawn butter.

4. Pull off each large claw at the body so the little knuckle sections are intact.

5. Pull the knuckle sections off the claw. Pull the long pincher part of the claw back carefully to remove it. Be careful, as there’s thin cartilage that will want to pull claw meat with it.

6. Crack the claw in the middle, and snap it in half, exposing the claw meat. Pull it out, and put it in the drawn butter. Repeat for second claw, unless it’s a cull.

7. Crack each knuckle section, and pull the meat out with the little fork. Drop it in butter, and eat immediately. Repeat. Do some work here, as there’s good meat in these knuckles.

8. Snap each little leg off at the body; snap at each joint. Put it in your mouth, and with your front teeth, bite gently to flatten and draw the leg out so the meat is “squeezed” into your mouth. This step is worth the effort.

9. Lastly, pull the breast plate off the body, and in there where the legs attached, there are sockets of sweet flesh. No one does this, and it’s a shame; it’s worth it.

Go back to the butter bowl, and enjoy the larger sections of meat. Take your time to chew, and savor the flavor.

First, I flip the lobster over, the way it is served as usual, sitting upright.
Oh, a boiled lobster—not baked or broiled—ever. Eat the meat from the small fins the lobster uses to propel itself. Then, I take off the claws and break the body away from the tail—gently. Nothing about taking a lobster apart can be completed quickly. Set aside the claws and tail. I then eat the meat from the body and the roe and tomalley—if it’s a female—that’s a bonus!

Then I attack, I mean, eat the tail. First, I twist off the fan-like tail pieces and suck out the thin pieces of meat hidden therein. I gently bend the tail in half and crack so I can reach into the tail with an index finger or a fork and slowly and gently ease the tail meat from its thin casing. Using finesse is important, because getting the tail out in one piece is definitely a lobster lover’s dream!
Then, with a glass of pinot grigio (insert wine of choice here), I eat the lobster tail to finish off a wonderful meal.

Eating the entire lobster, nothing is wasted.

3. Onto the claws. Each claw has a small part that moves independently from the rest of the claw. Separate that piece; when you do, the inner shell piece should come out, if it is the crushing claw. Once you remove it, more lobster juices will be released; again enjoy, or wait and drain. Crack the claw on the knuckle so you have a nice big opening to pull out the whole claw.

5. Pull out the legs, and you can bite down and suck on them. Meat and some of the salty lobster juices will come out.

6. Just like a crab, lobsters have meat where the head and legs meet. Peel the head shell off to expose the body. Wipe away the green stuff to get a clear shot at the lump lobster meat. Split it in half, and start picking. Do not eat the gills; they are a slightly different color and different texture. The are located on the outer side of the lobster body near the legs.

Do you eat the green stuff?

The liver and pancreas of the lobster is called tomalley. It is edible, but eating it may pose some health risks and should be done in moderation.

“A good lobster cracker, with the point to crack into the thick big claw, is essential. Nut crackers are useless. A three-pound hard shell might require a hammer on the big claw just to get it started. Also, even if [it’s] steamed, do it near the sink to drain any water in the claws.”

“Wire-cutter scissors, available at any store with construction materials.”

“The shell can literally be torn on soft shell lobsters, shedders, by hand. On a hard shell, nut or shell crackers can used, or maybe a mallet if the shell is thick. The knuckles require the most work. The tail can be laid on its side, pressure applied to crack the underside with the flippers, separated by pulling the shell apart, and the meat removed.” 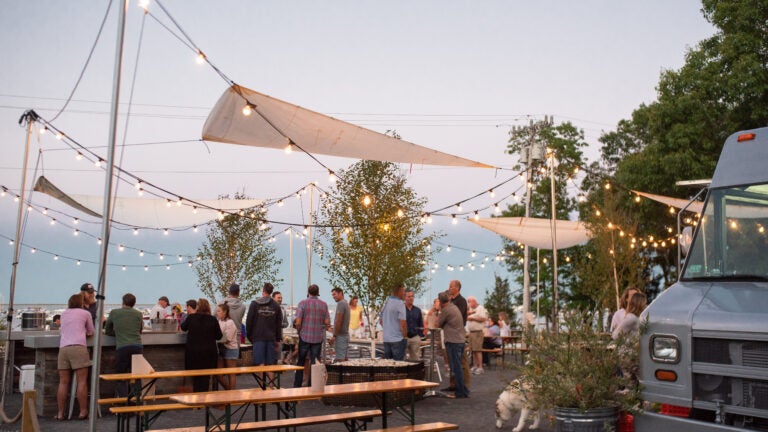 7 places to eat along the water on the South Shore