Boston.com readers love train travel, and with the proposal for an overnight train from Boston to Montreal, Canada gaining steam, we asked readers for their favorite train travel in New England. They sent us local train routes that were both practical and picturesque.

“It goes without saying that any train ride through the New England region during peak fall foliage season is a huge highlight,” said a reader, who told us there were so many great options to choose from that it was hard to pick a favorite.

We pulled together the top ten recommendations from readers to help you plan your next train travel. Whether you’re looking for options for a quick day trip, a scenic railway dinner, or a practical way to get to New York City and back, our readers have a train for you.

What are your favorite train routes that start or end in New England?

If you’re looking to take a day trip within the Bay State and want to travel by train, readers recommend the CapeFLYER, which runs on summer weekends. The train makes stops in Boston, Braintree, Brockton, Middleborough/ Lakeville, Wareham Village, Buzzards Bay, Bourne, and Hyannis.

“The CapeFLYER is a great way to beat the route 3 traffic to Hyannis. It’s a scenic ride along the Cape Cod Canal. Unfortunately, it doesn’t do a lot of good for those who are trying to go further east up the cape but it’s very convenient for folks to take a day trip to Hyannis or catch a ferry to Nantucket or Martha’s Vineyard,” shared a reader from Franklin.

With the Conway Scenic Railroad, you have several routes to choose from, each taking you on a charming ride through New Hampshire’s Mount Washington Valley.

“It’s a more scenic train route meant for a day of leisure than a route to get from point A to point B, but the North Conway Mountaineer (roughly 5-hour trip) is a great way to spend a Saturday on a beautiful fall or summer day,” said Kristen from the North Shore.

This Amtrak route begins and ends in New England, with daily trips from Boston to Brunswick and Portland, Maine. Eric from Jamaica Plain shared a particularly good memory from a Downeaster trip he took during a past holiday season.

“I don’t drive, so I tend to include train travel as either a part of or the entirety of any vacation plans I make. My favorite train ride within New England is the Downeaster. It is perfect for a quick weekend getaway to the classic beach resorts that surround Old Orchard Beach, the food cuisine of Portland, and the discount shopping at the Freeport outlets,” he said. “I fell in love with that train when I was coming back from a day trip on a nighttime train a few weeks before Christmas. The train speeds by the darkness of the track surroundings, occasionally interrupted by a string of festive lights on one of my fellow New Englander’s homes. It’s quite lovely as the simple joy of the season interrupts the black void.”

This recommendation is made especially for the train enthusiasts among us. Come aboard this functioning 20th-century steam locomotive for a ride through the Connecticut River Valley. For those looking to heighten their experience, Essex also offers a number of special experiences including a haunted train ride, North Pole express, and a dinner train.

“The Essex Steam Train is great because the sights and sounds of riding on a train being operated by a 1940s steam locomotive are like no other,” one reader shared.

Several readers named the ease with which they can get to and from Connecticut cities like New Haven and Hartford because of the Hartford Line. The train departs from Springfield, Massachusetts, and makes multiple trips a day.

Take a ride on this train from Boston, through the Berkshires, and towards the Fingers Lakes region of New York. For those looking to make a longer trip, the final destination of this train is Chicago.

Brian, who told Boston.com he takes this train from Boston to the Berkshires, said that “not driving on the Mass Pike during the summer is a true gift.”

The Cog Railway calls itself “one of the world’s great rail adventures” and our readers agree. A number of readers named it their favorite. This railway has been running scenic trips up Mount Washington in New Hampshire for more than 150 years.

Readers love the Northeast Regional both for its practicality and its views of the east coast. Boston to New York City is a common trip, but the train also makes stops further south in Washington, DC, and Virginia Beach.

“Just can’t beat taking the train from Boston to New York City and vice-versa. It checks all the boxes: reliably on-time, fully affordable (especially compared to gas prices, the mileage that would be put on a personal vehicle, and parking in the city), comfortable, quicker than driving at certain hours, and it trades the absolute worst stretch of road in America (95 through Connecticut) for a leisurely coastal roll along the rails,” said William from East Bridgewater.

Another favorite among our readers is this Amtrak train, which runs daily from Washington, D.C. to northern Vermont, making stops in four New England states. On this ride, you’ll get a glimpse of the Green Mountain State’s beautiful views no matter the time of year.

This railway transports you back to 20th-century Maine with a historical steam train through the Sheepscot Valley. The railway also offers some activities like pumpkin picking, evening concerts, and stargazing.

“I enjoy the historic, ‘narrow gauge’ trains operated at the WW&F Railway in Alna, Maine,” said Ed L. from Brunswick, Maine. “These smaller-sized railroads were unique to Maine and combine Yankee frugality with Downeast charm.”

​​Boston.com occasionally interacts with readers by conducting informal polls and surveys. These results should be read as an unscientific gauge of readers’ opinions. 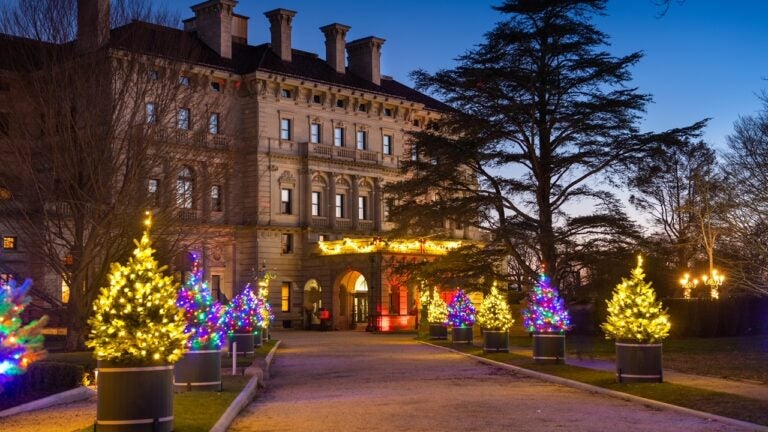