Nobody will doubt the importance of a good night’s sleep, but what happens when the thing keeping you from getting proper rest is your better half tossing and turning in the middle of the night? Many Boston.com readers have found the solution to this common problem by having separate beds — or rooms — when it comes time for sleep.

“Sleep divorce” has come up more in online conversations in the last year, according to an analysis by Sleepopolis, and here in Boston, those conversations tend to be in favor of sleeping separately from your partner when necessary. We asked Boston.com readers how they felt about regularly spending nights apart from their spouse and most of the 606 people who responded to the survey said “sleep divorce” has improved their quality of sleep and their relationship.

Sixty-six percent of respondents said they’ve already tried it and love it and another 20% said they’d like to give it a try. Of those who’ve already slept separately from their partners, just 3% said they hated the experience.

Just because you love your spouse, doesn’t mean your sleep habits will be aligned. Many readers said they’d take being well-rested every day over sleeping in the same bed and enduring snoring, comforter-hogging, and mismatched schedules.

“If we hadn’t done this, we’d have gotten for real divorced a long time ago. I’m an active, heavy sleeper. She’s a peaceful, light sleeper. I’m often up past midnight, she’s a 9 p.m. bedtime. We just aren’t sleep compatible, but that shouldn’t ruin the fact that we’re compatible in every other way,” said Bradley from Harvard.

Like several other readers, the only thing about the arrangement that Bradley takes issues with is referring to it as “sleep divorce.”

“Sleep divorce” is a lousy term by the way. Why give it such a negative connotation?” he asked. “It’s been a marriage saver for us and I suspect many others as well!”

Poor sleeping habits can contribute to risk for chronic health problems and make it harder to get through daily activities. For some readers though, nothing beats the feeling of falling asleep next to your partner.

“We are on earth for a short time,” one reader said. “Why would I deny myself one of the most profound pleasures of my life…cuddling and enjoying the intimate comfort of lying in bed with my loving husband?”

Every relationship is different and so is every person’s sleep needs. Below you’ll find a sampling of responses from readers who both love and hate the idea of sleeping apart from their partners.

How do you feel about couples getting a sleep divorce?

I’ve already done it and loved it.

“My wife and I started sleeping in separate bedrooms in the spring of 2022 and our relationship couldn’t be better. She’s early to bed and early to rise, whereas I go to sleep and wake up much later than she does. She’s also capable of falling asleep quickly, whereas, I need to read or wind down in bed before turning the lights off. Before, there was a constant effort to compromise, which meant neither spouse really slept the way they wanted to. Now, we both sleep as well as we possibly can. We get the whole bed, sleep when and for how long we want, and never disturb each other. On weekends we’ll have sleepovers and during intimate time, we joke “your place or mine?” I don’t think we’ll ever go back to sleeping in the same bed. Hey, if separate quarters is good enough for the Queen of England, it’s good enough for us!” — Sam, Winthrop

“We both have different kinds of insomnia and need different environments to fall asleep. Not to mention our toddler’s room is on a different floor than our bedroom, and they don’t sleep through the night yet. By sleeping apart, my partner and I both get more/better sleep, and I can sleep closer to our child’s room and soothe them when they need me.” — Janet, Somerville

“I have been sleeping in a separate room for two years. My fiancé gets up for work between 4:30 and 5 a.m. His favorite wake-up routine is hitting the snooze button every 10 minutes. I don’t have to get up until 6:45 a.m. When we used to share a bed we would fight constantly, have awful days, and be resentful. Plus, I’m pretty sure he has sleep apnea so the snoring is unfathomable. I am an extremely light sleeper. Sleep divorce, I think, has made our relationship so much better.” — Alicia, Lowell

“I am a long-time advocate of a cozy guest bedroom (and separate bath) doing wonders for a relationship! There are plenty of times when a good night’s sleep just can’t be had, usually from snoring, and popping down there makes me less grumpy. I’m well-rested and less resentful of my sleep being disturbed. For me, a happily coupled woman = a separate sleeping space when needed and my own bath. Both give me personal space, sleep, and sanity when needed!” — Gwen K., Brighton

“Health is life’s number one priority. Without it, nothing else matters. Sleep patterns contribute to maximum health, both physical and psychological. This is well-documented in the literature based on multiple studies. Understandably, partners prefer to sleep in one comfortable bed. Yet when one partner interferes with the sound sleep of the other, why continue the torture? Consider, instead, separate beds with visiting privileges! Does it really matter where one sleeps as long as it is a solid, healthy seven to eight hours? Wake up refreshed and grateful for the healthy, mutually caring, and considerate relationship you have.” — Ginny, Newton

“I’ve lived with my boyfriend for a year. I am a nurse, he works a 9 to 5. We have separate bedrooms and sleep in the same bed two to four times a week if and when our work schedules align. Best decision we’ve ever made.” — Luke, Boston

“We are in our seventies so we may not qualify. Suddenly my husband, who is the love of my life, began snoring enough that you could hear him across the country. We prefer to call it dating. Our love life has always been fabulous and it’s even better. Lack of sleep is a serious stressor no matter what age.” — Hope G.

I would try it.

“I personally want to try a sleep divorce but my spouse is against it. He snores, shakes the bed like a freight train, and violently cuddles me in his sleep. My sleep hasn’t been as consistent or high-quality in the two years we’ve been together. He believes sleeping apart is the first step toward distance in a relationship. So for now, I just try to fall asleep first!” — Nikki, Dedham

“Outside of cheating, nothing makes me homicidal more than his snoring.” — Sue, New Hampshire

“The real issue is the dog in the bed. Man’s best friend is even friendlier when it is time for bed. I stay up late while my spouse falls asleep earlier. We are considering splitting beds. The dog and I in one bed and my better half in the other bed.” — T, Brookline

“My wife is a stay-at-home mom, I work rotating nights and days. Sometimes I’m coming home at 4 a.m. after a night’s work and want to sleep until 10 or 11. We’re never on the same sleep schedule and usually wake each other up once or twice a night. She recently had strep throat and slept in the other room for a few nights due to constant coughing. I hate to say it, but those were the best nights of sleep I’ve had in a while.” — Tony, Georgetown

“I’d try it, but prefer to have my wife next to me even though she snores! I don’t like the name of it though — ‘sleep divorce’ sounds so negative.” — Jim, New Hampshire

Definitely not for me.

“I love to have physical contact with my partner at night, often with cuddles in the morning so sleep divorce would not work. I use a CPAP machine so that snoring is not a problem, and the rest of our sleep habits are compatible with each other.” — Greg, Arlington

“My husband and I both snore, but his snoring often wakes me up and definitely disrupts my sleeping. I have an elaborate going-to-sleep routine. He lies down and is asleep within minutes. But feeling his presence in our bed is warm and comforting (as well as sexy). Eventually, one or the other of us will be sleeping alone again. I have no need to jump the gun on that sad and lonely day.” — Penelope W., Worcester

“It’s a time when I feel close to my spouse. We talk, clear our minds, laugh, or sometimes cry together. It’s both symbolic and important to me on a level I don’t fully understand.” — Bill G., Norton

“She snores, I swat. I’m cold, she’s hot. She gets late-night notifications on her phone. But I’d rather sleep together than alone.” — Jason R., Malden

“I sleep best with my partner by my side. I notice it takes longer for me to fall asleep when we’re apart. We are lucky in that we have similar sleep habits. Now if we could sleep divorce our cat, that might be a different story.” — Tina S., Back Bay

I’ve already done it and hated it.

“Rather be in the same bed with my wife. It didn’t make our relationship any better. Now I have to make an appointment just to get close. We have grown apart and I am considering divorce. It sucks.” — Steven, Peabody

“Two nights a week he’s at work but the other five I’m sleeping in a different room. I snore and don’t like using the sleep apnea CPAP machine. Sometimes I like my own bed, but sometimes I get lonely.” — Janet, Woburn

“My (now ex-) husband kept pushing me out of bed in the middle of the night so that I fell on the floor. He would be rigid and spread-eagled across the bed so there was no more room for me on either side and I would end up sleeping on the couch or floor the rest of the night. This went on for over a year. We bought a bigger house with more bedrooms, got a bigger bed, and put our old double bed in the extra bedroom. I started sleeping there in order to nurse my daughter in the middle of the night and avoid him waking due to her crying. Soon after, he told me to take my clothing and move it to the other bedroom, which I did. After doing this we stopped talking to each other and became totally estranged. We divorced about 4 years later, after having separate bedrooms that entire time. Some sleep problems are caused by marital strife because I think that my ex-husband really didn’t want me anyway and the problems with sleeping together were due to that. When we first married, we never had any problems sharing a bed.” — Anonymous, Boston 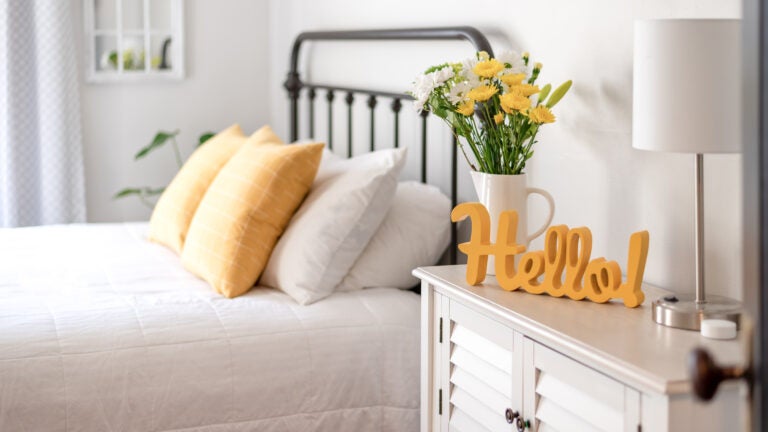 No guest bedroom? You can still host company comfortably.