For many New England skiers and snowboarders, the light snowfall expected to begin late Wednesday will hopefully mark the beginning of more to come for the season.

We recently asked Boston.com readers about their plans for this ski and snowboard season and received responses from nearly 200 readers. The majority of our readers (93%) are excited to ski or snowboard this winter, expecting to escape from work and get some fresh air. Chris W. in Hingham wrote, “Looking forward to the quintessential New England winter experience. Not concerned about anything except a lack of snow and a short season.”

After last season when resorts enacted new restrictions and some closed due to the COVID-19 pandemic, many readers are ready to return to the mountain. “I am 71 in December and eager to get back on the slopes,” Alan L. from Yarmouth wrote.

Many readers shared their thoughts on the current season, their favorite resorts, and some concerns over the Omicron variant.

“Looking forward to being able to take my son to Saddleback [Mountain] after it being closed for a number of years,” Jill from Peabody wrote. “I learned to ski here and grew up skiing here…now I get to share this amazing place with my family.”

Brian B. from Newburyport mentioned the role skiing plays for his family and their social and emotional health. “With our busy schedules with work, school, and basketball…skiing provides us with an opportunity to be in the outdoors as a family creating priceless memories!” Rob S. in North Hampton also wrote, “The kids can happily disconnect from technology and be kids. It makes a huge difference on their well-being and ours too!”

New Hampshire, Vermont, and Maine top the list of where readers will hit the slopes

Readers will plan to ski or snowboard at more than 30 resorts across Massachusetts, Vermont, New Hampshire, and Maine. Resorts that received the most mentions were Loon Mountain Resort (New Hampshire), Stowe (Vt.), Sunday River (Maine).

Loon Mountain in New Hampshire was the top mention by 16 readers. The resort will debut its Kanc 8 chairlift on Friday, and the snow tubing center is projected to open the same day. The schedule for the Sno-Go signature program is yet to be announced, but you can still plan ahead for this fun ski-bike experience.

Stowe Mountain Resort in Vermont was the second most mentioned by 15 readers as the mountain they’re planning on visiting this year, and it’s good timing too — the resort is celebrating its 85th anniversary this season. The resort will hold signature events like its lights festival on Dec. 18. If you are an intermediate-level skier, you can join their free, guided heritage tours exploring the history of Mount Mansfield and Spruce Peak.

Sunday River in Maine also received mentions from 15 readers. The resort opened last month and has already kicked off special events like their annual Santa Sunday. Plan ahead for their Winterfest Weekend or New Year’s Eve celebration. If the shorter daylight hours have you concerned, Sunday River offers their Twilight Skiing program on Fridays, Saturdays, and holidays so skiers and riders can enjoy the slopes after sunset.

Some are concerned about COVID-19 safety requirements, others are worried about a ‘lack of snow.’

Among those who shared their concerns for the current season, COVID-19 related safety protocols was the most mentioned topic for readers. With its presence in Mass., some readers mentioned the new variant Omicron as a reason for their concern.

One reader who does plan to ski or snowboard this season, but is not sure which mountain wrote, “[I’m] concerned about new COVID variants leading to the closing of indoor spaces on mountains.”

Many New England resorts require or highly recommend wearing masks indoor, and some are requiring proof of vaccination for their dine-in services. While skiers are anticipate wearing masks, some readers are still worried about the lack of social distancing and overcrowding indoors, not just in dining areas. “What concerns me is sitting with people on lifts, or being inside overly-crowded lodges,” David T. from Wrentham wrote.

The weather plays an important role to resorts’ operation schedules and snow making and grooming processes, so it was also frequently mentioned among our readers as a top concern.

Despite snow projected for late Wednesday, some readers are noticing the unseasonably warm winter. Richie D. from Hampden is most looking forward to “[g]reat snow” this season. His top concern? “Poor snow,” he simply wrote. Scott in Longmeadow, who plans to hit the slopes in Stowe with his daughters for the first time in two years, shared a similar worry. “[C]oncerned about lack of snow and temperatures not being cold enough to make snow.” Heather Z. in Needham agrees. “[I’m] only concerned about bad weather, i.e. RAIN.”

Responses have been lightly edited and condensed for clarity. 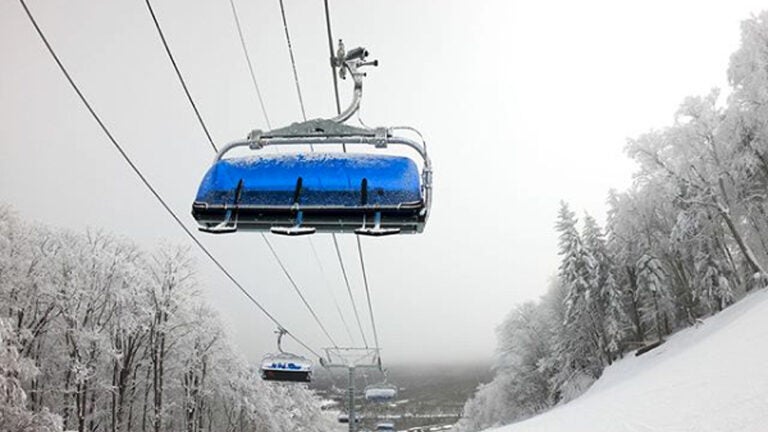