For a certain segment of society — the part that can actually remember watching live broadcasts of Apollo missions as they took off in the 1960s and ’70s — the ongoing coverage of the upcoming Artemis I launch, now scheduled for Saturday, must be cause for more than a little deja vu.

After all, by the time the Challenger explosion became the defining “where were you?” moment for a generation of schoolchildren in 1986, it seemed NASA had already moved on from the moon, with the space shuttle program promising bigger outer space fish to fry. And yet here we are, decades later, plotting a return trip.

And not just for a quick fly-by, either. This particular spacecraft is scheduled to orbit the moon and then return to Earth in about six weeks, and after that, the sky’s apparently the limit, literally. “Artemis I will be the first in a series of increasingly complex missions to build a long-term human presence at the Moon for decades to come,” NASA insists.

But why? Well, one reason is so we can use it as a way station on our way to Mars and beyond — it seems since the last time we were there, scientists have figured out that ice buried deep under its poles could be a game-changer when it comes to the moon’s usefulness in that regard.

The ice “can provide drinking water for future astronauts visiting the moon, and water can be broken down into hydrogen and oxygen,” Kenneth Chang reports in the New York Times. “The oxygen could provide breathable air; oxygen and hydrogen could also be used as rocket propellant.

“Thus, the moon, or a refueling station in orbit around the moon, could serve as a stop for spacecraft to refill their tanks before heading out into the solar system,” Chang writes, no doubt blowing the minds of anyone who grew up watching “Star Trek.”

Throw in the beneficial societal advances that historically have come along with space program initiatives, a motivation to keep China from crowding the U.S. out of the latest space race, and a desire not to get shown up by the likes of Jeff Bezos and Elon Musk, and it seems like a no-brainer.

Er, except for the hundreds of billions of dollars it takes to do it, of course. And it’s not just the usual curmudgeons who’ve raised that concern: Even Mr. Hope-and-Change himself, Barack Obama, canceled an earlier version of the Artemis program, citing the costs.

Some former NASA officials have even spoken up about potential pitfalls. “I am conflicted. I want to embrace this point in history that so many people have worked for — to have the capability to again go to the moon,” Lori Garver, NASA’s former deputy administrator, told Scientific American last month. “But for me, the opportunity cost in time and in dollars, competing with programs that would be so much more efficient, and the recognition that I do not see a realistic, sustainable path for this program — all that makes it hard.” Uh-oh.

So what do you think? Is it worth the risk and cost for the U.S. to get back into the moon business? Or should we leave such things up to the Jeff Bezoses of the world? Answer the Boston.com survey below, or email [email protected], and we may use your response in a future article.

Should the U.S. be going back to the moon? 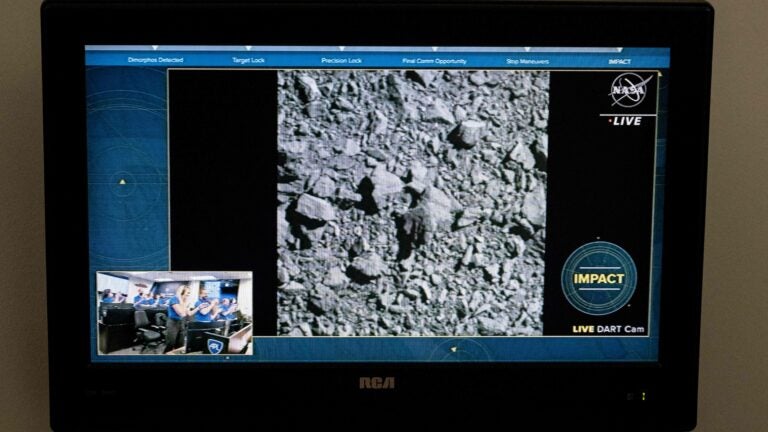 NASA smashes into an asteroid, completing a mission to save a future day