It takes more than obedience and good breeding to become a service dog. At Guiding Eyes, a New York–based nonprofit that provides guide dogs free of charge to the visually impaired, the training takes years.

It begins at eight weeks, when the pups—specifically bred by Guiding Eyes—are paired with volunteers who teach them basic obedience and house manners. The hard stuff comes at around 18 months, when the dogs face In-for-Training evaluations to see if their demeanor and skills are right for the program. (How do they react, for example, to someone shaking a can full of pennies?) If they pass, they spend up to six months in intensive training with a professional instructor, learning skills like how to indicate a change in elevation through the dog’s movement, how to maneuver around obstacles, and even “intelligent disobedience’’ for their handler’s safety.

Finally, after months of training and exams, the pups graduate. The best join 45 working guide dog teams in the Massachusetts area. A second tier of dogs is paired with autistic children through the Healing Autism program. Others become breeders.

Overall, more than half the dogs will fall into one of the three tiers, but that leaves a lot of dogs that don’t. And some pups don’t even make it into training to begin with. So what happens to the dropouts?

Luckily, nothing bad! They go up for adoption. Just because they didn’t make the Guiding Eyes cut doesn’t mean they’re not fine pets. They’re healthy, calm, confident, and polite.

There are caveats, of course: The waiting list is three to four years long, and the fully trained young adult dogs cost a suggested donation of $3,000. For puppies, the suggested donation is $1,500—but the puppy waiting list is closed. Guiding Eyes is currently not promoting its adoption program because of this high demand, and instead trying to encourage people to volunteer or simply make a donation.

And Guiding Eyes is not alone. Many service training organizations have their own, in-house public adoption programs. The demand for these released dogs is also extremely high. Pawsibilties Unleashed said it receives over 200 inquiries a day.

Some of those adopted dogs wind up leading a life of service anyway. Michelle Zenkel, of New York state, has adopted two dogs from the program, Maverick almost 14 years ago and Keira a couple of years later. Both had failed the penny test. It was only when Zenkel’s son, then 11, was in a bad accident and recovering from head trauma that she realized Maverick could still be of service.

After surgery, a nurse had come into her son’s room asking if he would like to visit with the hospital’s therapy dog. He did. Zenkel’s son “pet her and snuggled, and the dog was licking his face. You could see the tension and anxiety from his surgery just dissolving. It was an absolutely remarkable thing for me to witness,’’ Zenkel said. It was then she began to think her gentle, laid-back Maverick could do the same thing.

“The fact that Maverick was released from the program was great for my family,’’ Zenkel said.

After taking classes, Maverick and Zenkel became a registered therapy team, going weekly to hospitals and working with patients in mental distress. The duo even traveled to Long Island to work with victims in the aftermath of Hurricane Sandy. They were asked to help work with victims of the Boston Marathon bombings as well, but Maverick’s health suddenly took a turn for the worse. He died this past spring.

“Other than having my kids and raising them,’’ Zenkel said, “being a pet therapist was the best and most accomplished part of my life.’’ 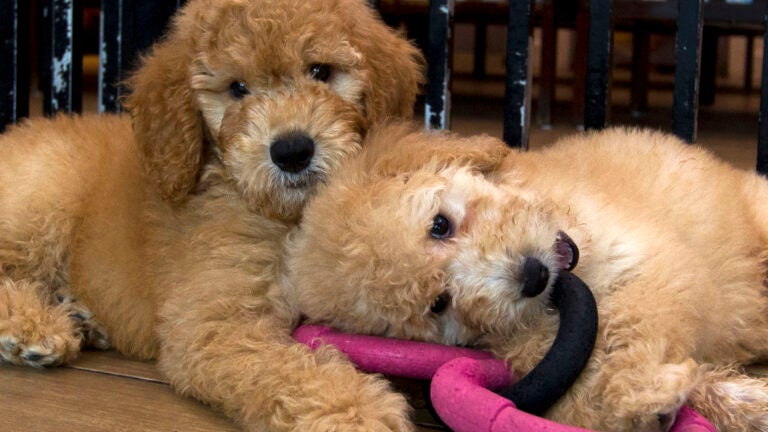