Starting this weekend, Bostonians walking around Faneuil Hall’s Marketplace Center will see some new produce, but this isn’t the edible kind available at nearby Boston Public Market. This produce makes up an inflatable fabric art piece by Seoul-based artist Choi Jeong Hwa, and it’s part of the Museum of Fine Arts Boston’s “Megacities Asia” exhibit.

“The way I imagine people encountering it is that when you see it, you realize that it’s something from the natural world but you can feel immediately that something’s not right, that the foliage is this huge bundle of fruit,” said Laura Weinstein, co-curator of “Megacities Asia.” “It’s supposed to make you ask, ‘What is natural and what isn’t?’ You know this tree isn’t a natural thing but it’s beautiful.”

It came to life Friday afternoon, when museum staff inflated the piece with an electric air pump and offered free smoothie and juice samples from Mother Juice.

This is the first time an MFA exhibit has featured art so far from the museum, Weinstein said. It was Choi’s idea, sparked by his visit to the MFA last year to construct an indoor installation. He likes to see his work in busy areas like shopping malls, Weinstein said, and she’s excited about the connection to the nearby markets.

Real produce didn’t inspire this piece, though. Choi often walks through the street markets of Seoul and notices the plastic fruits and flowers on display, according to Weinstein.

“He says this kind of funny thing that [a piece of] plastic fruit is actually more alive than a real one, because they never fade or rot or fall apart,” Weinstein said.

“Fruit Tree” is one of 19 immersive artworks featured in “Megacities Asia,” the MFA exhibit that features work from artists who live in one of Asia’s megacities—cities with a population of more than 10 million people. All of the art pieces are also large scale sculpture and installation works, Weinstein said, and they all comment in some way on the city in which they were made.

“Megacities Asia” runs through July 17. Visitors can get a free museum admission by taking a picture with the “Fruit Tree” sculpture and showing it, via your mobile device, at the MFA ticket desk as part of the “Fruit Tree, Go Free” promotion.

This article has been corrected to refer to Choi Jeong Hwa by his surname; Korean surnames are listed first. 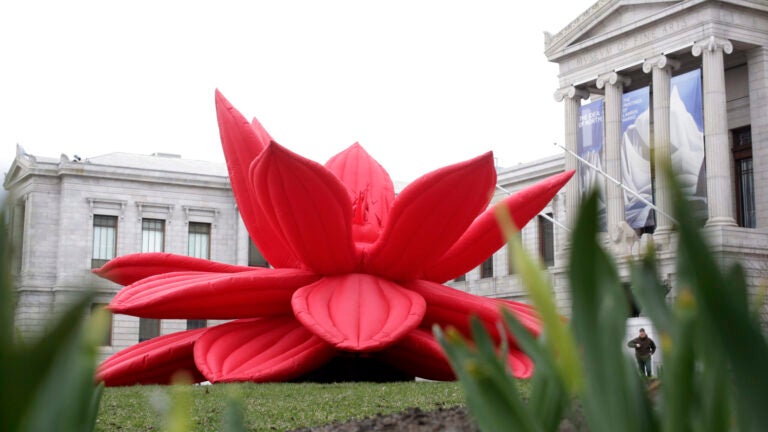