Weinstein has been the focus of intense scrutiny after bombshell investigations in The New York Times and The New Yorker detailed multiple allegations of sexual harassment and assault against the mogul.

Now new revelations indicate that Weinstein arranged for $600,000 raised at an auction for the New York-based AIDS charity amfAR to be sent to the ART. According to reports in The New York Times and the Huffington Post, the ART had agreed to reimburse Weinstein and fellow investors in “Finding Neverland’’ for earlier payments to develop the production if he could arrange third-party charitable donations to the Cambridge-based theater.

The $600,000 allegedly helped fulfill that agreement.

An internal report commissioned by amfAR’s board and obtained by the Globe stated that it appeared “the transaction was designed to accommodate Mr. Weinstein’s interest rather than amfAR’s’’ and found that amfAR’s failure to disclose that some of the proceeds would go to the ART constituted “fraud on the bidders.’’

At a May 2015 amfAR fund-raiser auction in Cannes, France, a substantial amount of the proceeds from two fund-raising packages arranged by Weinstein — a photo shoot with fashion photographer Mario Testino and a “Hollywood Experience’’ including tickets to Oscar-related parties — would go to the ART.

According to the internal report, the two Weinstein-arranged auction packages brought in $909,669, and Weinstein and amfAR’s board chairman, the fashion designer Kenneth Cole, agreed that the ART would receive $600,000, while amfAR would get $309,669.

The report, which was produced by attorney Thomas Ajamie, noted that an insert to the auction catalog had disclosed that some of the funds for the photo shoot would go to the ART, but it did not disclose the same for the “Hollywood Experience.’’ Weinstein told the Times that it wasn’t his responsibility to tell donors purchasing the auction packages that the money would be used to reimburse him and other “Finding Neverland’’ investors.

Through his lawyer, Weinstein denied wrongdoing.

“There was no evidence that Mr. Weinstein engaged in any violation of state or federal charity law or that any charity, bidder, or donor was harmed in connection with the amfAR event,’’ said Weinstein attorney Jason Lilien.

The $600,000 transaction has rocked the high-profile AIDS charity.

In a statement provided by a spokesperson, the four amfAR board members said the $600,000 transfer to the ART occurred “despite the clear objections of the executive management team and without the knowledge of the entire voting members of the Board.’’

A spokesperson for Schneiderman told the Globe, “Our charities bureau is working with amfAR in connection with a dispute among board members, with the goal of achieving a resolution as expeditiously as possible.’’

“Finding Neverland’’ was directed in Cambridge by ART artistic director Diane Paulus, who went on to direct the Broadway production.

In a statement provided to the Globe on Wednesday, an ART spokesperson said:

“A.R.T. received $600,000 in 2015 through an Amfar event at which proceeds from some auction items were earmarked for the A.R.T. It is standard practice to not disclose the specific terms of agreements.’’

Some at the AIDS charity apparently had qualms about the $600,000 transaction early on.

In a June 2015 internal amfAR e-mail obtained by the Globe, amfAR CEO Kevin Frost worried that “[n]othing about this deal feels right to me.’’ Frost did not respond to a request for comment from the Globe.

According to the internal report, there was a deadline for the arrangement: The $600,000 had to arrive at the ART by June 1, 2015. Otherwise the reimbursement deal was off, according to the Huffington Post.

When the money arrived at the Cambridge theater, which exists under the umbrella of Harvard University, ART producer Diane Borger wrote Frost, saying an attorney would be in touch “with a few questions about the amfar donation.’’

The report states that an attorney called Frost on behalf of the ART the following day, saying the theater was surprised by the $600,000 from amfAR.

“She asked if Mr. Frost could explain it,’’ the report states. “Mr. Frost said he couldn’t explain it and that [the ART’s lawyer] would have to speak to Mr. Weinstein about it.’’

After the internal report raised questions, amfAR subsequently hired a second law firm, Gibson, Dunn & Crutcher, which found the transaction to be above board. “We concluded that the foundation engaged in a lawful transaction and the donation to Harvard was a lawful contribution,’’ Orin Snyder, a partner in the law firm, told the Globe on Wednesday. “Any suggestion that the transaction was unlawful in any way is incorrect and offensive.’’ 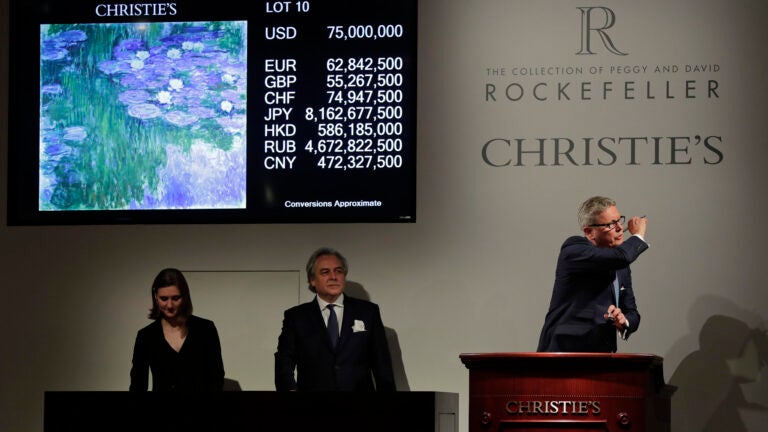