The Emerald Necklace is about to enter a fog.

World-renowned Japanese artist Fujiko Nakaya, 85, has traveled to Boston to create a series of fog sculptures inside five urban parks: the Arnold Arboretum, The Fens, Franklin Park, Jamaica Pond, and Olmsted Park. The public art installation will be available for 12 weeks, from this Saturday through Halloween.

Nakaya said Olmsted’s work is what drew her to Boston.

“He’s a master,” Nakaya said. “The landscaping is really beautiful.”

Nakaya has already designed more than 80 fog sculptures around the world, at spots like the Tate Modern in London, the Guggenheim Bilbao in Spain, and the National Gallery of Australia. The Emerald Necklace marks the second time she’s brought her fog art to New England. In 2014, she designed a fog sculpture at Philip Johnson’s Glass House in Connecticut.

The artist flew from Japan to Boston on July 25 to begin constructing this new exhibit. She’s visited Boston three times since October to study the parks and prepare for the five simultaneous fog sculptures that will mark the largest collaboration of her five-decade career. 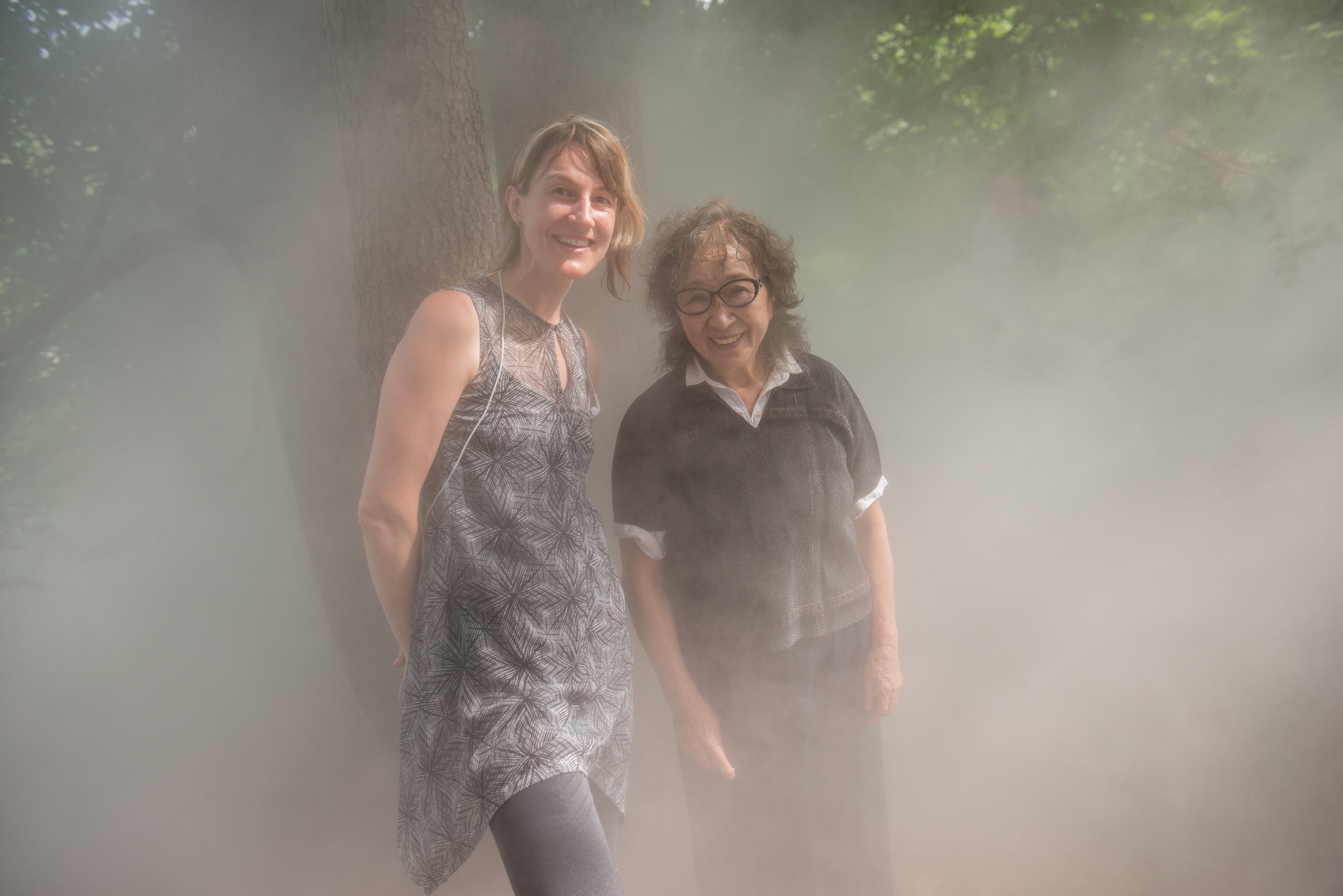 Jen Mergel, curator, and Fujiko Nakaya, the Japanese artist who created the fog sculptures inside the Emerald Necklace.

Nakaya said she enjoys working with fog because “you can’t pin down the form. It’s always changing. Everything is dependent on its environment, so you never know how it’s going to end up.”

The Boston sculptures will vary daily due to changes in wind, temperature, and humidity, said Nakaya, who has already painstakingly installed between 260 to 860 fog-making nozzles at each site. Nakaya adjusted the nozzles so as to maximize the fog’s interaction with the unique landscape of each site, said Jen Mergel, the Boston-based guest curator of the Emerald Necklace exhibit. Nakaya also masterfully controlled the volume and water pressure at each location to get certain effects.

“She’s really, in each place, doing something quite sophisticated with her medium to help the fog perform differently,” Mergel said.

As a result, guests at the Arnold Arboretum site will see a “fogfall” that rolls down a hill, according to Mergel. Nakaya wanted this fog to feel as if she were taking a cloud from the sky. At the Fens, 12-foot-high nozzles will run from tree trunk to tree trunk to create “sort of an overhead veil,” Mergel said. 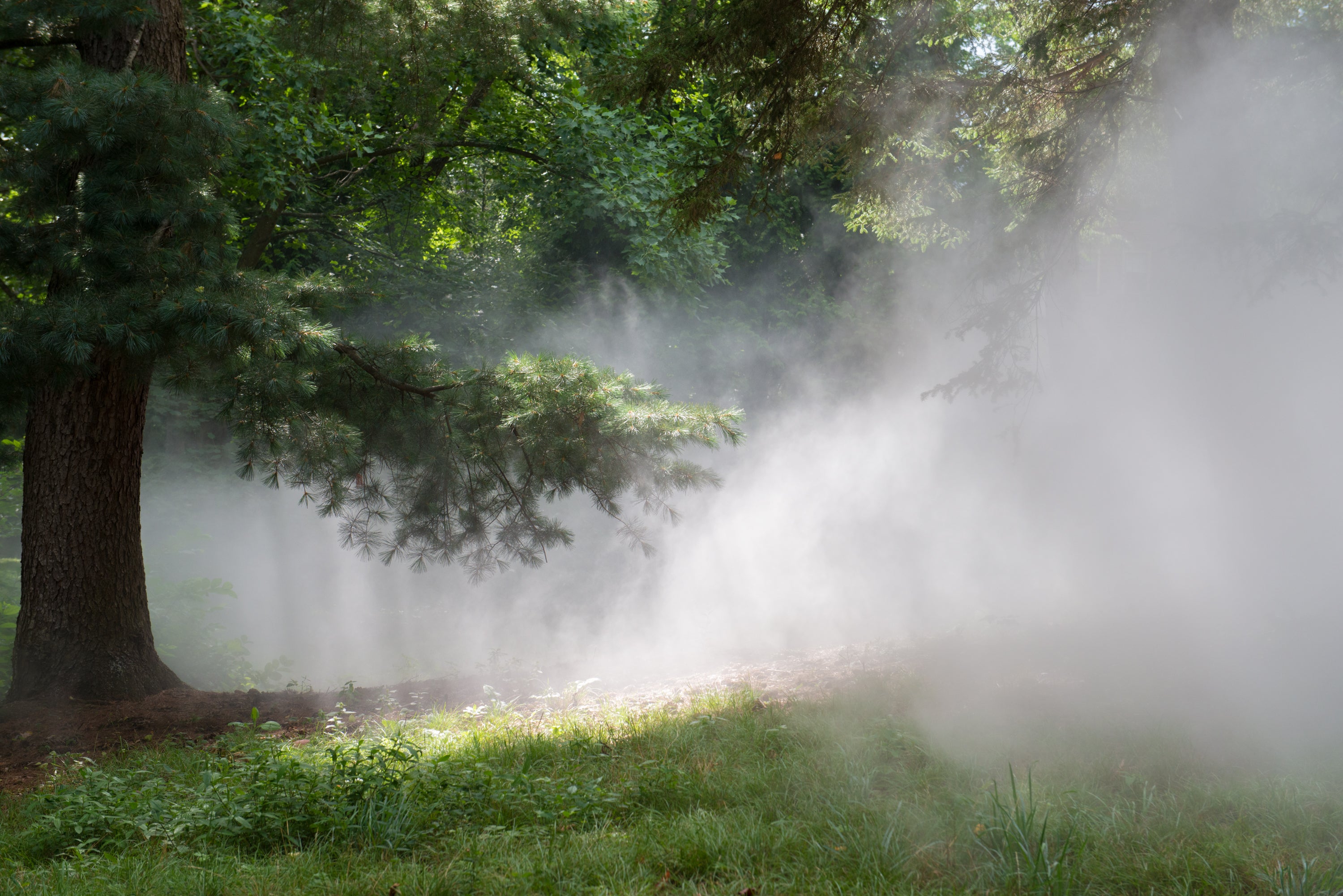 The fog sculpture at the Arnold Arboretum.

Visitors also will be able to take in several free “fog performances” by local artists throughout the length of the exhibit. There will be dancing, singing, live instrumentals, and other types of entertainment to accompany the fog, and an Olmsted historian will lead visitors on guided walks.

Mergel said she’s “thrilled” to have an artist of Nakaya’s caliber in Boston.

“[Nakaya’s] works of art, you can literally walk into, breathe, taste, touch,” she said. “You can feel them on your skin, you can swallow them.”