While the City of Boston re-evaluates the future of a decapitated Christopher Columbus statue, strong opinions from residents have emerged on both sides. The Italian American Alliance in Boston are pushing for the statue’s restoration and return, with the view that Columbus is a symbol of hope for many immigrants seeking economic opportunity. But members of the Indigenous Peoples Day MA coalition are petitioning for the permanent removal of the statue as it represents white supremacy and celebrates genocide.

Last week, Boston.com asked readers who they believed should be honored as a statue in Boston. More than 800 people responded with 239 different statue suggestions, as well as new ideas ranging from public gardens, art installations, sculptures, or nothing at all. There are a range of recommendations, from Boston-born Donna Summer, ex-Patriot Tom Brady, and even Batman.

Ahead, find out the top 10 Boston.com reader-recommended statues and submit your vote in our poll below.

1. Christopher Columbus (161 votes). The majority — with 20 percent of the vote — called for the return of Columbus. He received more votes than any other individual suggestion, but represented 20 percent of the total vote. The North End statue was erected in 1979 and has been a point of cultural pride for the Italian-American community. One reader wrote, “Christopher Columbus made out of steel so people can’t destroy history.” But the Italian explorer’s legacy has also come to symbolize loss and genocide, and the North End statue has been subject to numerous calls for removal and vandalism since the ’90s.

2. Thomas Menino (31 votes). The late Mayor Menino was Boston’s longest-serving mayor from 1993 to 2014 — and first Italian-American one.

3. World Unity Landmark (30 votes). The Boston-based nonprofit World Unity has been campaigning for years to build a landmark promoting ‘equality, diversity an inclusion by showcasing the Sun Poem.’

4. Crispus Attucks (26 votes). Attucks was the first American killed by British soldiers during the Boston Massacre. He was of African and Native American descent and has come to symbolize the fight for an independent America.

5. Tom Brady (21 votes). Although Brady has moved on to Tampa Bay, he helped lead the Pats to six Super Bowl victories over his 20 seasons with the team.

7. The Route 1 orange dinosaur (17 votes). This one may be a joke (or not), but it’s got some momentum behind it. A Change.org petition to replace Columbus with the brightly-hued carnivore already has over 5,000 signatures.

8. Martin Luther King Jr. (15 votes). One of the most well-known leaders of the civil rights movement, Dr. King came to Boston for a doctorate in theology at Boston University and it was during this time he decided to pursue social activism. A monument to Dr. King in Boston Common is already in the works.

9. Bill Russell (14 votes). Celtics legend Bill Russell won 11 NBA championships during his 13 years with the team and served as the Celtics’ player-coach from 1966-69, making him the first Black coach in North American professional sports. Russell has also been vocal about racism in America, and recently shared his opinion in an op-ed he wrote for Boston Globe Magazine.

10. Donna Summer (13 votes). The “Queen of Disco” and five-time Grammy Award-winning singer grew up in Boston’s Mission Hill neighborhood was known for her range from rock, dance music, to gospel — and influenced many top performing artists today. 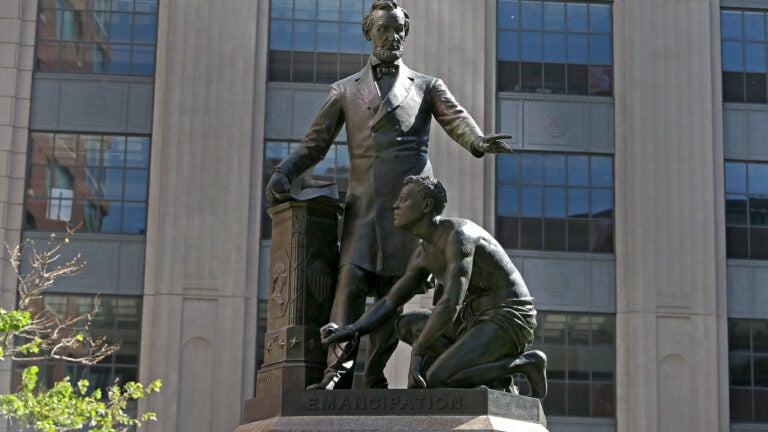