When Chyrstyn Fentroy first joined the Boston Ballet in 2017, she was the sole female Black dancer in her company.

“I had these insecurities joining Boston Ballet, as they didn’t have any other Black women in the company when I joined,” Fentroy told Boston.com this week. But the company’s welcoming atmosphere immediately put her fears to rest, she said. “That has been really empowering, realizing that they wanted me there as an artist and a human, not as a number.”

And now, as of Dec. 22, Fentroy has been promoted from ballerina to principal dancer. Since joining the company, Fentroy has earned various promotions, first to second soloist in 2018, then to soloist in 2019. Artistic Director Mikko Nissinen describes Fentroy as a “passionate,” “dedicated,” and “versatile” artist.

Originally from Los Angeles, Fentroy began her dance training at a very young age under her mother, Ruth Fentroy, who is a former professional regional and international ballet dancer turned assistant musical theater professor at Boston Conservatory at Berklee. While Chyrstyn was unsure about pursuing dance professionally until the age of 18, she was able to expand upon her training at the Joffrey Ballet School in New York City.

After studying at Joffrey and touring as a principal dancer with the Dance Theatre of Harlem for five years, she was able to gain her footing both as a dancer and young adult.

Beyond her undeniable talent, Fentroy has made diversity, equity, and inclusion a top priority in her career by spearheading the Color our Future mentorship program at Walnut Hill School of the Arts. At the Boston Ballet’s Professional Division at Walnut Hill, renowned Boston Ballet faculty instruct Walnut Hill students in dance. The mentorship program gives pre-professional ballet students a chance to explore conversations related to diversity, equity, and inclusion with professional dancers at the company.

Boston.com sat down with Fentroy to talk about her creative process, her experience being a biracial woman in the world of ballet, and her feelings about becoming a principal dancer.

Q: What was it like in LA being taught by your mother while growing up, then later in New York at Joffrey? How did these experiences prepare you for this promotion to principal dancer?

A: I started training under my mom at a very young age because she was still dancing and teaching full-time. I was exposed to performances really young; I have very vivid memories of watching her dance while I was in the wings and trying to imitate her movements, specifically with the Sugar Plum in The Nutcracker. I think I was exposed to a lot of things that taught me what performances were like, how to prepare for them, and rehearsal processes.

I think my mom and I had an interesting dynamic in that I went through a phase of rebellion – I started not wanting to be in ballet class, doing everything I wasn’t supposed to do just because I had spent so much time in the studio as a kid. It was that phase which eventually led me to seek training elsewhere. I was at Joffrey for two years before I sought out professional jobs. Those two years were really important because I was living in New York by myself, besides my roommates in my dorm, and I was in an intense training environment.

The year I joined Joffrey Ballet School, they started the Joffrey Concert Group, which is a small student company that would tour and do performances for a few weeks per year. That gave me some early touring experience and I learned what it meant to dance on different stages and prepare for different styles and roles. My Joffrey training helped me feel more well-rounded as a dancer, too. Since Joffrey isn’t tied to any company, I really had to look inside myself to decide what my next step was going to be afterwards. My path wasn’t as clear-cut as it might be if you have an idea of the exact company you want to work with, which a lot of dancers do have.

From Joffrey, I got my first full-time job at the Dance Theatre of Harlem, which was primarily a touring company. So all that experience really helped with my transition. And now, because of that, even when Boston Ballet goes on tour, I feel ready for whatever the world or stage throws at me.

Q: How do you define yourself as an artist, whatever that means to you?

A: In one word, I would define myself as human. In life and in dance, I feel everything very deeply. I try to stay present, especially when I’m dancing with others. Not everyone is a dancer, so not everyone in the audience will know what perfect technique means. While perfect technique is something I always want to reach for, what most people will remember is the human aspect of whatever story you’re telling.

This definition doesn’t necessarily change when becoming a principal dancer. In fact, one of the most exciting parts about being promoted is that I can represent something larger than myself being a biracial Black woman. There’s this added element of relatability that I offer to a specific group of young dancers who may not have otherwise identified themselves in classical dance. I think that the “human” aspect now has a broader reach given this new role.

Q: On that note, what has your experience been like being an artist of color?

A: I have had experiences that were both challenging and empowering. After attending a school that was predominantly white, and even being raised by a white mother, I had to come to terms with the fact that I am biracial; I had always felt like this mismatched “other” space. It’s great sometimes, but it can also be isolating.

In making the transition to the Boston Ballet from the Dance Theatre of Harlem, a predominantly African-American company, I worried that I was just filling a number and was a diversity token … That was definitely an internal struggle, though. The company itself has been so welcoming; I have been learning to articulate my needs if they’re different than other people’s, specifically when it comes to my hair.

Q: Tell us more about wearing your natural hair during performances. What has that been like for you?

A: When watching past videos from various performances of this specific ballet I was performing in, I had never seen a dancer in it who had a noticeably darker skin tone or different hair texture like mine. So when I performed it myself with my natural hair, I felt like for the first time, I was 100% me onstage. I was accepted for every part of me, from head to toe.

Q: When you’re in a show and taking on a new character, what is your creative process like?

A: The creative journey starts from the very beginning of the rehearsal period. Especially when you’re creating a character, it should look as natural as possible. But it’s hard to answer that question because most of my roles haven’t been storytelling roles where it’s been a whole evening of playing one person. That’s why I’m so excited about being a principal dancer: I can take on a character and really act on stage.

But otherwise, I do have different scents that I will spray on myself before a show! If I’m nervous or need to have a calm demeanor onstage, I wear a little bit of lavender oil because the scent is gentle, restful, and even. If I’m doing something a bit more sultry, I’ll spray a little bit of something like that on my wrists. But I have a super sensitive nose and don’t like it when other people wear too much of something, so I keep it minimal!

Q: That’s definitely an example of one, but do you have any other pre-show rituals or habits you do frequently?

A: I’m a really big napper. If I have something that’s challenging and makes me nervous, I always have to nap, even if it’s ten minutes, before the show. I also have a calm pre-show playlist as well as a pump-up one.

Q: Will being a principal dancer change your day-to-day routine?

A: Not really, because we all still will take classes together and rehearse. The only thing that will really change is the characters I play. Right now, we’re working on a lot of ensemble work, so there isn’t a clear principal role I’m learning right now.

Q: What is something that you appreciate about the dance world as a whole?

A: Especially in the last two years, the dance world’s willingness to have conversations about diversifying the arts and exploring issues of access and providing scholarship opportunities has opened up. That makes me really proud of the dance world, and the ballet world specifically.

Q: Was that part of what led you to develop the Color our Future mentorship program?

A: Yes, that program is meant to bridge a gap between students at the Walnut Hill School of the Arts. It initially started to provide students a pathway towards speaking to someone who can help provide access and look like they do. However, I didn’t want it to be specific to only students of color because I think it’s important for all students to have these conversations about diversity, equity, and inclusion. Primarily, it’s shaped in a way to start conversations, keep them going, and to inspire students to use their art to project their voices.

Considering my own experiences navigating the dance world originally, that’s part of the reason why this program is so important to me. I wouldn’t have changed my own journey for anything, but having someone to help guide you is an amazing thing. I would like to articulate and share my own experiences with others when it’s valued.

Q: What is something you would change about the dance world?

A: I wish this process could happen faster. I wish this conversation would have started sooner so more people could have felt more welcome in these spaces. But in that same sense, if the change happened at the snap of a finger, it might have felt performative. So I know that we’re on the right track. 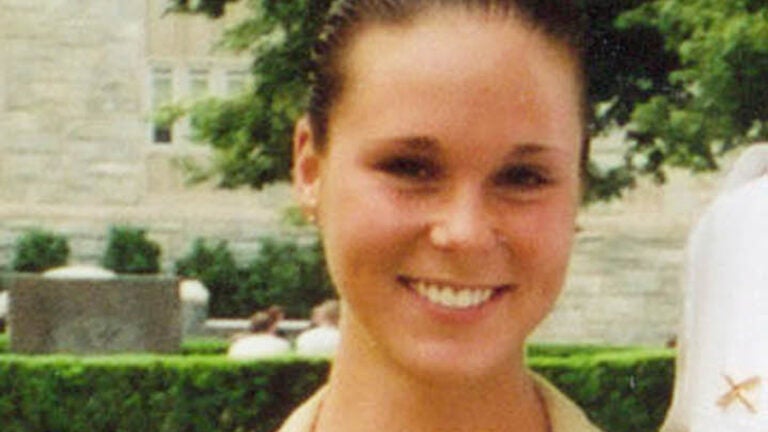