There’s a grand irony to “The Art of Banksy,” a traveling exhibit of original work by the anonymous street artist which is now open in Cambridge.

Banksy’s work is anti- a lot of things: anti-establishment, anti-fascist, and anti-Paris Hilton’s music career, as one famous piece showed. Perhaps most of all, his work is anti-capitalist, both in its message and in its preferred medium: as graffiti freely available to view on streets and building walls instead of in stuffy museum galleries.

Produced by Starvox Entertainment, “The Art of Banksy” chronicles some of the highlights of the provocateur’s career, focusing in particular on his most prolific period from 1997 to 2008. Walking through the labyrinthine Harvard Square gallery space, you’ll witness the evolution of his distinct stenciling style, gain a greater appreciation for his recurring motifs, and learn about some of the artist’s more transgressive acts.

One slight disappointment is that the majority of the art on display are prints, rather than large mural versions of Banksy’s work. That said, it’s obviously for the best that Starvox didn’t take to the streets of Bristol with chisels in hand to secure their art, instead paying private collectors to secure approximately 80 Banksy prints and works on loan that have been valued at $35 million, according to the company.

Even if the works aren’t mural-sized, seeing notable pieces up close like “Girl With Balloon” and “Flower Thrower” (presented in an elegantly framed triptych) is a rare experience, especially for audiences outside of the United Kingdom. The organizers have also taken time to add contextual narrative to “The Art of Banksy” in the form of carefully written art blurbs and video interviews with Banksy-associated artists displayed throughout the exhibit space.

Nevertheless, it’s hard to dispel a nagging feeling that the mere existence of “The Art of Banksy” runs counter to everything the reclusive artist stands for. Tickets to the exhibit start at $40, and can cost up to $100 for a VIP experience. In a fitting nod to Banksy’s 2010 documentary “Exit Through the Gift Shop,” visitors to “The Art of Banksy” do exactly that, where they can purchase shirts, mugs, and tote bags galore.

Banksy has made his feelings clear about unauthorized exhibits like “The Art of Banksy” through Pest Control, a Banksy-affiliated website.

“Banksy has NOTHING to do with any of the current or recent exhibitions, and they are nothing like a genuine Banksy show,” reads a statement from the artist. “They might be crap so please don’t come to us for a refund.”

Ross justified the exhibit’s unauthorized existence in an interview with Boston.com, saying there’s value in discussing the work of a political artist like Banksy with an exhibit that’s independent of the artist.

“If he made his own exhibit, I would love to go see it, and I’m sure the world would, too,” Ross told Boston.com “For whatever his own reasons are, that’s not what he’s doing.”

Given that “The Art of Banksy” is just one of several traveling “edutainment” exhibits profiting off of Banksy’s work, and that the artist himself isn’t a fan, walking through the Cambridge gallery triggers mixed feelings. But in the end, “The Art of Banksy” is a net positive for the art-goers of Boston, offering a rare opportunity to experience the works of one of the world’s best-known contemporary artists up close. 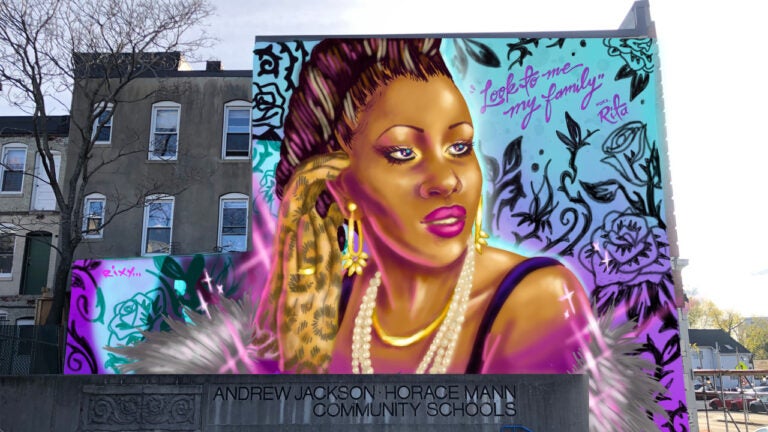 A mural honoring Rita Hester, in all her glam, is coming to Allston this month