The Lansdowne portrait, a life-size painting of George Washington created in 1796 by Gilbert Stuart, was the first U.S. presidential portrait. Since then, the tradition has continued here in nearly the exact same way — until the Obamas came along.

Barack and Michelle Obama’s portraits reject standard presidential portrait norms: While the subject is depicted traditionally, the backgrounds subvert expectations via their abstraction. The Museum of Fine Arts, Boston, has taken this redefinition of traditional portraiture and turned it into a redefinition of the meaning of leadership and aspiration as “The Obama Portraits” tour makes a stop in Boston from Sept. 3 to Oct. 30.

“In a way it makes sense that it was Barack and Michelle Obama — who in so many ways were very groundbreaking as a President and a First Lady, who in turn chose two incredible artists —  who again break ground in terms of introducing a whole new language to that tradition,” said Curatorial Chair Reto Thüring, the Beal Family Chair of Contemporary Art at the MFA.

The seven-city exhibition is making its final stop in Boston before the paintings return to the National Portrait Gallery. Along the way, each museum had the opportunity to showcase them in their own unique style.

“We have created a crowdsourced installation in response to the Obama portraits,” said Mariel Novas, the Patti and Jonathan Kraft Chief of Learning and Community Engagement at the MFA.

This installation, titled “Portraits of Leadership,” showcases portraits from the community featuring leaders of all kinds. Responses came from far and wide, beyond Boston and the United States, including from South Korea, Poland, the United Kingdom, and Costa Rica.

“They showcase voices of individuals, but [also] the larger vision of what a leader can be,” Novas said.

The presidential portraits stand tall in a room of their own. Despite Michelle Obama’s portrait being slightly smaller, they are set at eye level with each other and the audience, placing all three on an equal setting.

The installation is in two parts, one of which is a corridor extending from the room with the presidential portraits.

“When you see these big historical figures, you forget that you yourself can sometimes be that person. And then you come into the corridor and you see everyday portraits,” Novas said.

The subjects of these everyday portraits range from mentors, teachers, parents, pets, superheroes, fictional characters, and notably, one artist’s sister giving him the side eye.

By showcasing these alongside presidential portraits, the MFA allows everyday people to see themselves as leaders. This expands the definition of leadership to a concept that anyone of any race, age, and gender can aspire to fulfill.

It’s similar to the vision artist Kehinde Wiley had for the portrait of Barack Obama.

“It’s an opportunity for people who traditionally have had very little relationship to museums and to what’s on their walls, to feel themselves included,” he said in an interview with The Guardian.

Both artists’ visions included creating a space for people of color in traditionally white-dominated spaces — something the Obamas did through their commission. The extended installation by the MFA carries on this legacy.

The MFA had over 2,600 submissions, and every single one of them is represented on their walls with over 200 additional digital submissions on the museum’s website.

“Something as simple as this crowdsourced inspiration can have so much meaning at home and beyond,“ Novas said.

For instance, Novas shared the story of a woman whose parents used to be cotton pickers, who never thought they would see a Black president or be on the walls of a place like the MFA. Through this installation, she submitted “I Will Always Support You,” a picture of them that brought this dream to life. It’s now hanging alongside the Obamas.

“If [visitors to the museum] do want to contribute, there will be art making set up and the portraits will be pinned because we want to keep it going,” said Karen Frascona, PR Director for the MFA. 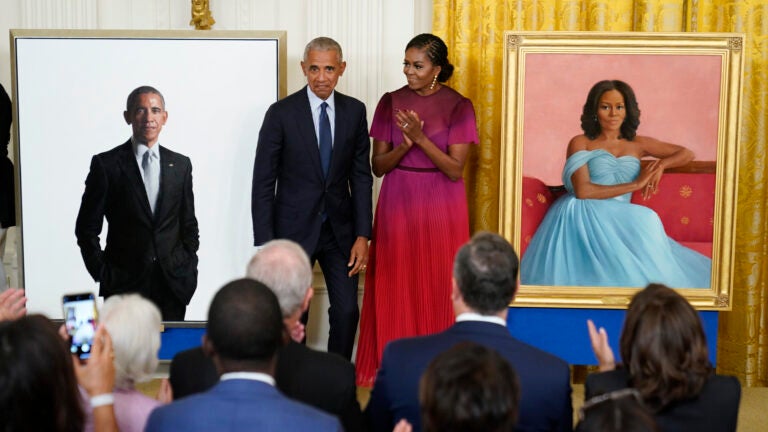 Here they are: Obamas unveil their White House portraits