For the past few years, Swedes purchasing a bottle of Calvin Klein’s Encounter cologne have probably been greeted by the piercing gaze of an American actor.

Same for anyone who has purchased certain brands of face paint in Uruguay, electric razors in China or knee-length ponchos in Europe.

Something about the man’s familiar countenance enchanted product-makers from around the world, who chose his stock image out of millions to feature on their packaging. But the man in the picture, B.J. Novak, a 42-year-old actor best known for his role on “The Office,” didn’t choose to be the face of perfume or face paint or ponchos.

Someone else chose his picture and then uploaded it “years ago” to a website where it became part of the public domain, he said Monday on Instagram.

That could mean the image, complete with his tousled hair and black collared shirt, is free to use without permission. Whatever the legalities, many companies have been using it for years, as BuzzFeed noted Tuesday in a roundup of personal care and household products from around the world bearing his image. So, yes, that is Ryan from “The Office” on a box containing hair clippers.

Novak could not be reached for further comment through his representatives. He is best known for his character from “The Office,” Ryan Howard, who rose from a much-abused temp to a corporate executive for the fictional Dunder Mifflin Paper Co. Off camera, Novak was a writer, director and executive producer for the hit U.S. sitcom, based on the British series of the same name. He has gone on to other projects in film and television, including “The Premise,” an FX on Hulu anthology series.

Novak appeared to be taking his stock photo fame with good humor. On Instagram, where he posted the pictures of himself on various product packages, he saved the images in a collection he called “modeling.”

Mr. Novak is in hallowed company, as stock photos like “Hide The Pain Harold” and “distracted boyfriend” have been used and reused around the world.

The actor Simu Liu has often joked about the time he modeled for stock images in 2014. He said he was paid $120 to shoot the photos, which have since appeared in everything from textbooks to Y.M.C.A. fliers. “That stock photo shoot always finds a way to come back and haunt me LOL,” Mr. Liu said on Twitter in 2018.

Most likely, Novak has not made any money off his picture, as images in the public domain are free to use. But Marc Misthal, a principal lawyer at Gottlieb, Rackman & Reisman, a New York law firm, said that, at least in the United States, Novak has a number of possible legal options to pursue — if he wants to.

His lawyer can send cease-and-desist letters to the companies that used his image, or he can escalate the matter by suing the companies, said Misthal, who specializes in copyright and trademark law.

However, Misthal said he thinks the actor is more likely to pursue a case against the companies who made money off the photo than the person who uploaded the picture to a public domain website.

“It’s really the fact that his face or likeness is associated with a particular product, because they’re using his likeness in order to attract customers and basically make money,” Misthal said.

But, if Novak’s Instagram post on Monday is any indication, he has no plans to take legal action against anyone.

“I am too amused to do anything about it,” he wrote.

He has known about his double life as a “model” since at least 2014, when he posted a photo on Instagram of his picture on cologne boxes, showing five sets of his eyeballs staring down Swedish shoppers.

He joked at the time, “I am #blessed to announce the launch of my fragrance, available now in a Swedish department store.” 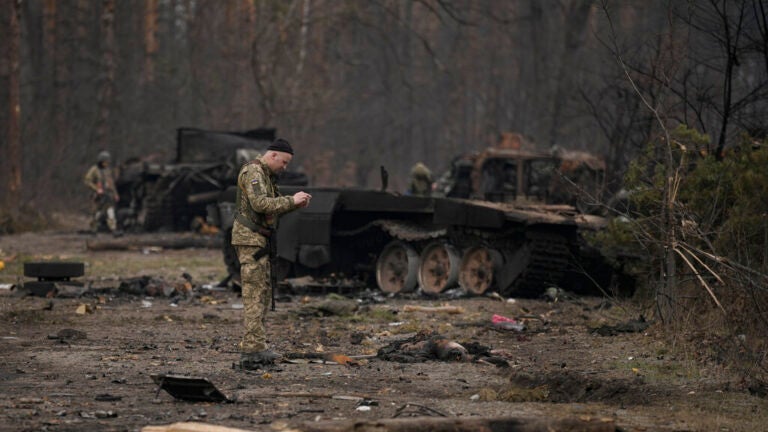 Ukraine is scanning faces of dead Russians, then contacting the mothers