Who better to give a beer recommendation than someone who works at or even owns a brewery? That’s why we reached out to breweries all over New England to get a taste of what their staffers will be drinking this fall. Ranging from traditional Oktoberfest beers to pumpkin-flavored pints, here are the beers that experts plan to sip this season.

“It’s a beautiful example of a Marzen-style lager, and I have fond memories from past autumns of drinking a few of these while raking leaves with my brother and father.” — Tyler Fitzpatrick, head brewer at Lamplighter Brewing Co. in Cambridge

“If there is a better delivery vehicle for that much-needed autumnal dose of bready malt character, I haven’t found it!” — Tim Adams, founder at Oxbow Brewing Company in Newcastle, Maine

“On the short list of New England fall beers I am really excited for is Bunker Brewing in Portland, Maine. They just brewed an Oktoberfest, and I am sure that is going to be fantastic! Bunker does a great job with lagers, and I am sure this will be no exception.” — Allen Van Anda, co-owner at Lost Nation Brewing in Morrisville, Vermont

Planned on going to a concert, but my couch seemed way too nice to pass up. Enjoying my post-work #bunktoberfest from @bunkerbrewing, so perfect for a foggy autumn night at home ? #oktoberfest #märzen #pröst #tistheseason #autumn #portland #maine #craftbeer #drinklocal #bunkerbrewing #netflixandbeers

“I previously brewed at Wormtown Brewery in Worcester, and they brew some great beers, including Norm’s Chocolate Coconut Stout, a beer named after local beer and coconut lover Norm Miller. On fall brew days, the brewery was filled with a sweet, dreamy aroma. The beer itself was full-bodied and decadent — perfect for crisp New England nights.” — Megan Parisi, brewer at Samuel Adams Boston Brewery in Jamaica Plain

“I’m really psyched to get into some Life On Märzen from South Deerfield, Massachusetts’s Berkshire Brewing. I’ve always enjoyed their amped-up, extra-big, super-malty take on the style.” — Will Meyers, brewmaster at Cambridge Brewing Co. in Cambridge

“It’s a simple, classic, Marzen-style lager with a toasty, yet balanced malt profile and is brewed with just the right amount of bitterness. Plus the blue and gold argyle-labeled 12-ounce cans are pretty sexy.” — Matt DeLuca, head brewer at Castle Island Brewing Co. in Norwood

“We at Jack’s Abby are excited most about Zero Gravity’s Oktoberfest. After all, we love German malt and think they do a great job with this one. A great fall beer from Vermont!” — Samer Khudairi, digital marketing coordinator at Jack’s Abby in Framingham

Canned yesterday and hitting shelves today! This year’s batch of Oktoberfest is out and tasting quite fine . . . #vtbeer #craftbeer #oktoberfest #btv #vermont

“A great fall beer that I’d be happy to see in a cooler at any tailgate is Harpoon’s Flannel Friday. I love a well balanced amber ale. Flannel Friday has [a] good, bright hop aroma that builds off a strong malt backbone. Citrus and pine notes give additional depth. With an ABV of 5.7 percent, you can reach back into the cooler with a clear conscience.” — Russ Heissner, founder and brewer at Barrel House Z in North Weymouth

“As an employee-owned brewery, we’re going to have to give a shout-out to a fellow Vermont ESOP company: Harpoon Brewing. Their Flannel Friday brew means fall has truly arrived!” — Amy Lieblein, digital marketing and events manager at Switchback Brewing Co. in Burlington, Vermont

What type of Flannel are YOU?! Take our quiz to find out! (Link in profile!) . . #tgif #flannelfriday #friday #beer #craftbeer #flannel #lovebeerlovelife #quiz #harpoon #harpoonbrewery

“I’m looking forward to Allagash Interlude. We always get a bottle to have with Thanksgiving dinner.” — Dan Kleban, co-founder/co-owner of Maine Beer Company in Freeport, Maine

“Disclaimer: Most typical fall beers aren’t my thing, but I did some poking around and came across a ‘fall by default’ beer that I’m super interested in trying, although I’m not sure I’ll get my hands on it before it’s gone… Rising Tide is releasing their first coolship beer this week called Harkness. It’s a true spontaneously fermented ale (lambic) and has been in the works for two years!” — Vanessa Morea, assistant brewer at Beer’d Brewing Co. in Stonington, Connecticut 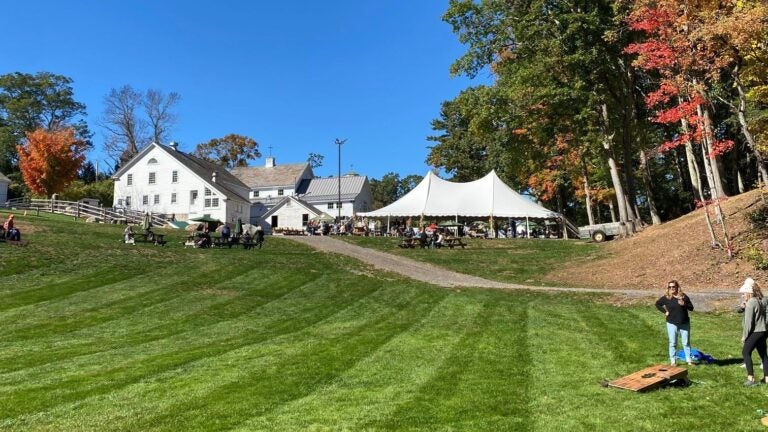 Oakholm Brewing Co. in Brookfield is beautiful, and other recent thoughts on beer